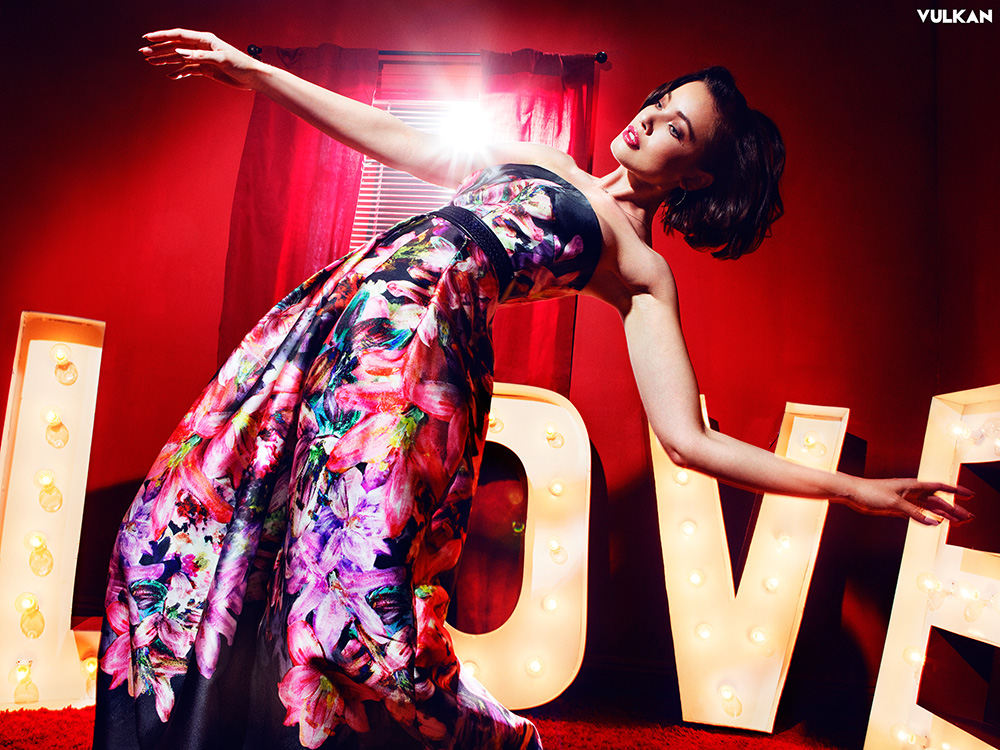 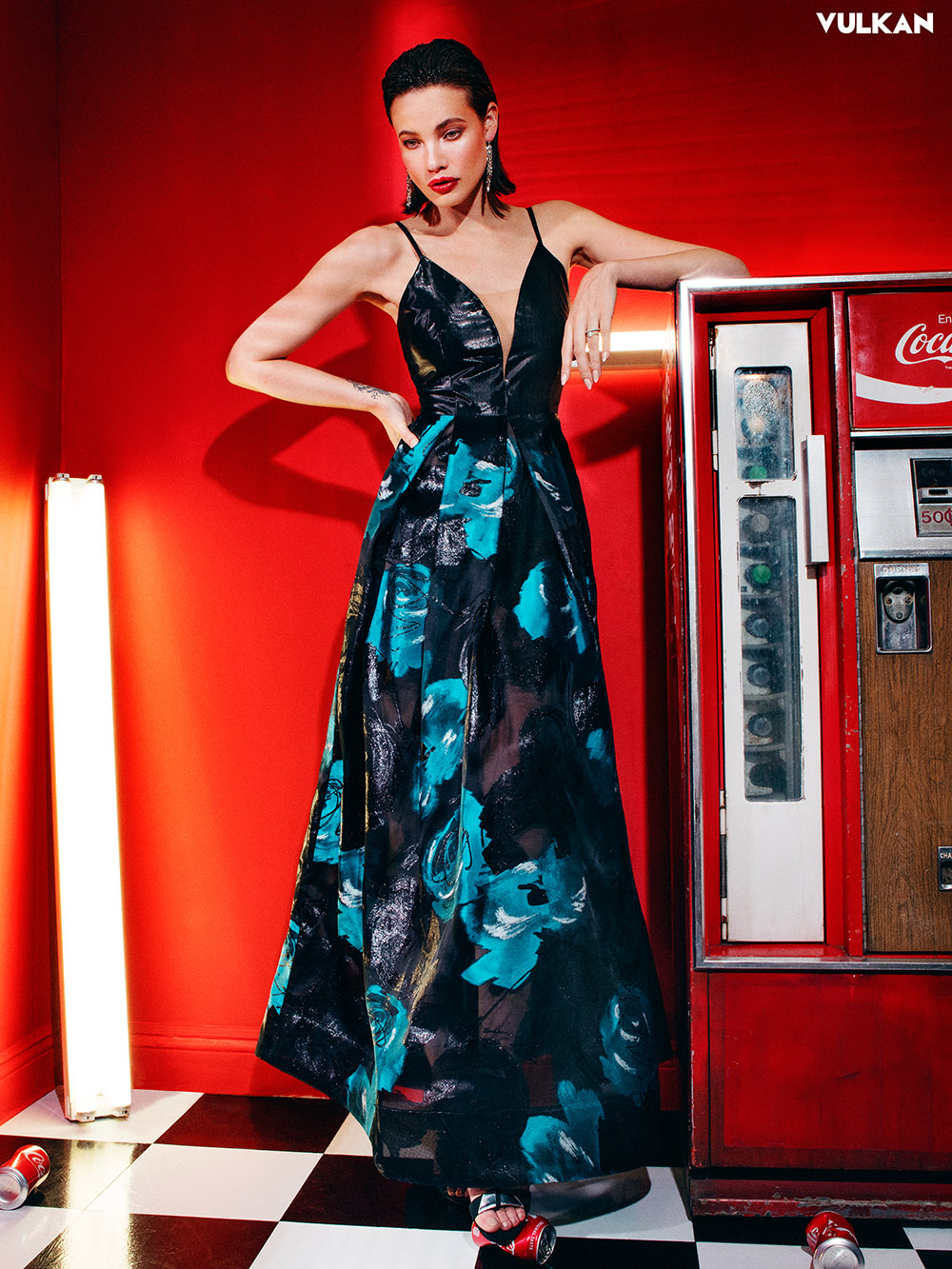 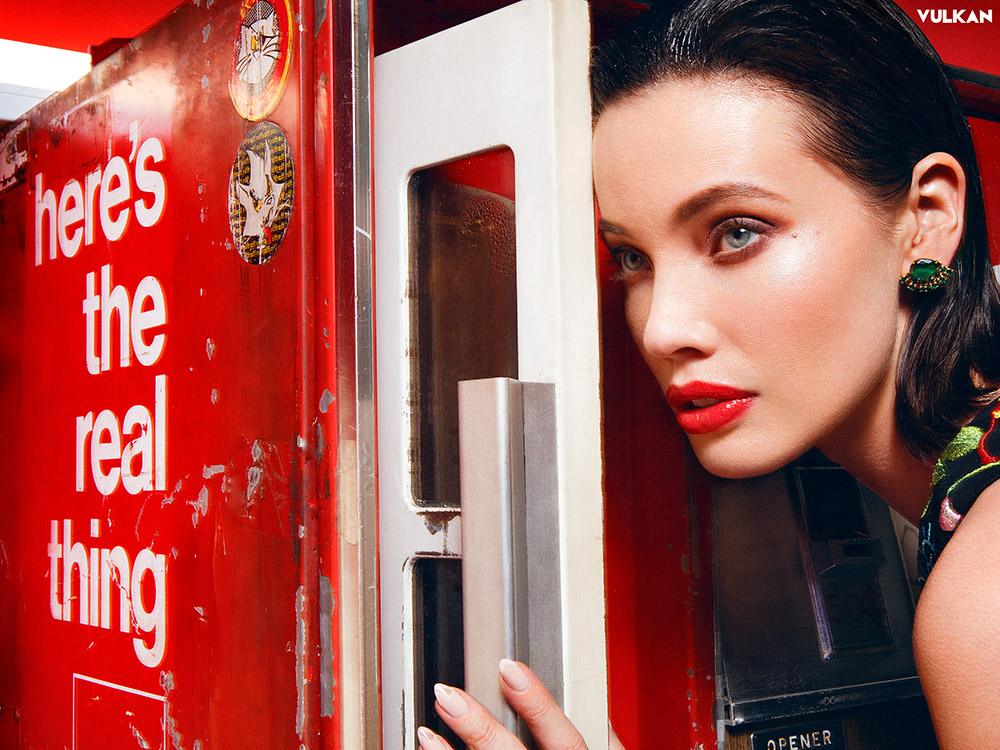 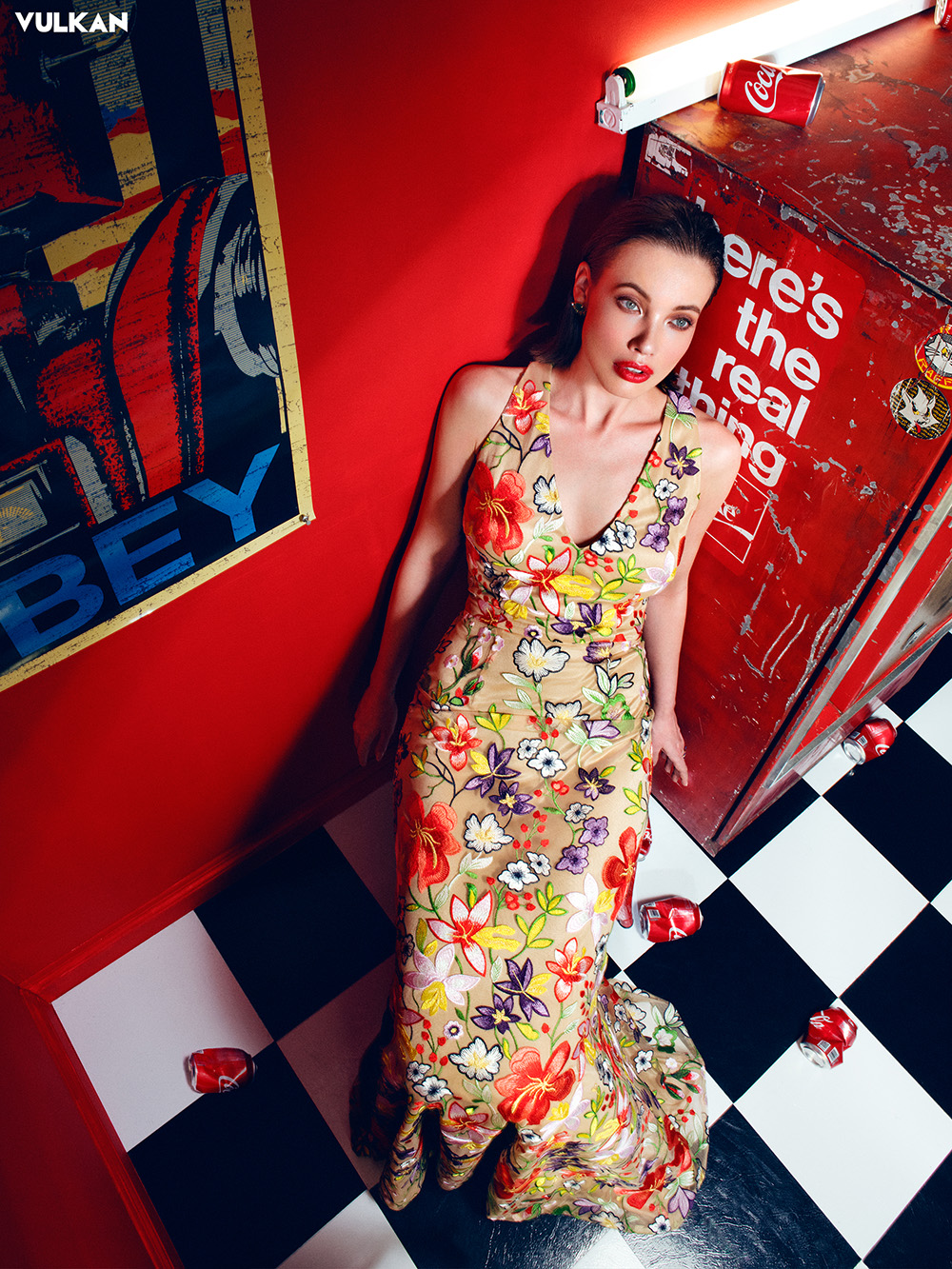 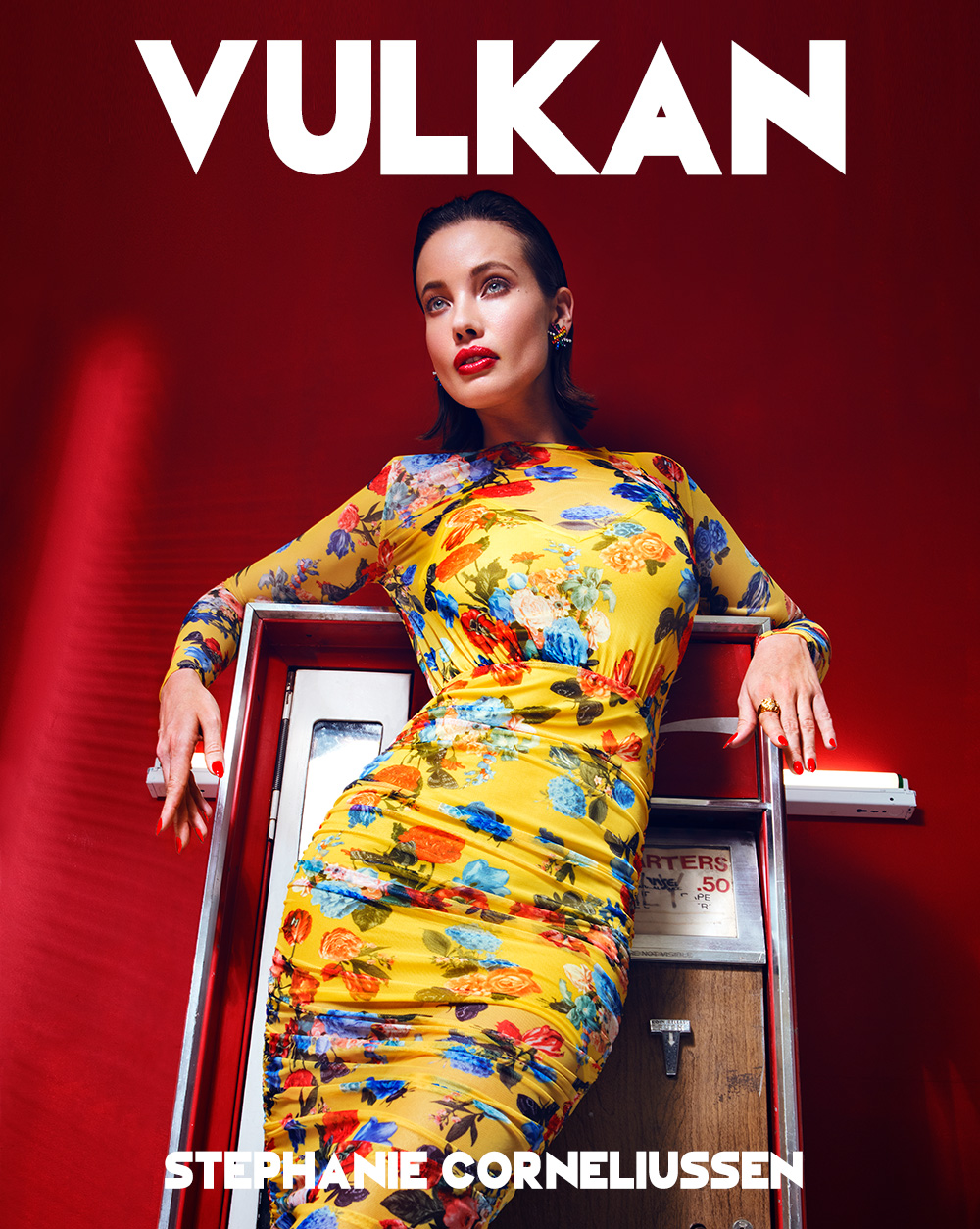 Actress Stephanie Corneliussen is well known for her role as Joanna Wellick on Mr. Robot and currently she can be seen as the “Mysterious Woman” on the TV drama Deception. VULKAN caught up with Stephanie to discuss what intrigues her about these types of characters and her prior experiences with modelling.

You were discovered at age 13. Looking back, was it strange to be thrust into the world of modeling so early? Were you prepared for it?

Entering the world of modeling was unexpected. I came from a performance background having danced for years. The demands, if you will, in the dance world were similar to those of modeling. You’re a child in an adult world. People are making a living directly related to your performance. As a kid those expectations and consequences thereof seem far removed. I don’t think any kid is prepared for it. You’re forced to grow up quickly.

What was one of the most challenging adjustments you have had to make in order to advance in modeling?

Being that I was only 13 when I started, those were formative years for me. I’m not sure that any adjustments went by noticed. Traveling, dieting (in retrospect that sounds crazy to say about a child), altering your looks, the sort of enforced independence and exposure to other cultures were part of an organic development. I’d never known any other way, and in hindsight, I don’t think I had the capacity to reflect over comparisons to my friends who had a more traditional childhood. It was just my way of life.

When faced with a modeling shoot where you are not wholly comfortable, whether it’s due to the clothing choice, makeup or location, how do you handle it?

I know that it doesn’t work like this everywhere in the modeling industry, which is problematic, but with the very young models at my agency in Copenhagen where I started out, you would have a chaperone accompany you to shoots, whether that be a parent or an agent. I think that should be the standard. When you’re a child, standing up to authority, in this case adults, can be difficult. I always had someone I could express my concerns to. When I was a little older (15 or 16), I was fully capable of saying ‘no’ myself. I’ll be honest, it wasn’t always welcomed, but I think one of the reasons my parents even allowed me to enter into that industry was because I had a strong sense of integrity. I think that is necessary for any parent to instill that in their child, should they choose to enter into any adult business ahead of time.

What advice might you give young girls who are entering the modeling world today?

I don’t think I’m qualified. The modeling industry today is vastly different from when I started out over 15-years ago. Lily Aldridge said it best: “Back in the day it used to be that you would have to work hard to be famous. Today you have to be famous to work”.

What intrigued you most about the tv series Deception when you read the script?

What captured me was the air around the show. The lightness and humor of it. Having just come off such an intense show as “Mr. Robot,” “Deception” offered something different. The show is fast paced and exciting and no matter the plot or subplot it leaves you with a happy feeling. Like a “good prevails” feeling. The world of magic was also a world I was unfamiliar with, so much time and planning goes into creating these illusions to entertain and intrigue us. I have found such respect for the artists who create it.

Do you find you are drawn to mysterious characters?

Joanna (“Mr. Robot”) and Mystery Woman (“Deception”) are both mysterious ladies; I think I’m intrigued with any character that has the words “mysterious” or “enigmatic” attached to them. It’s almost like the creators and writers of these characters allow a bit more of creative freedom for the actor portraying them. If you’re developing an already carved out character, which I don’t mind at all, a lot of the internal world and motivations are already created for you to interpret, but when the word “mysterious” pops up, there’s an opportunity to create a personality for the character, where choices you make for them suddenly becomes theirs.

It must have been really cool to have Penn and Teller make a cameo. Are you a fan of their work and did you get to participate in any of their tricks behind the scenes?

I wasn’t there the day they were filming. I would have loved to meet them, but I’m wholly satisfied with having been able to spend time with “our” magicians Francis Menotti and David Kwong. To this day there are still tricks they’ve shown me that my brain has just given up on trying to figure out.

Did you learn any fun new skills while preparing for this role?

Well as far as magic goes.. I’ve tried, not yet succeeded. Not by lack of competent teachers, just a testament to how much time and energy the real life illusionists have put into mastering something as “simple” as a coin trick. I can roll a silver dollar over my knuckles now… and that was hard! Comes in handy at the poker table… at least I look like a pro! Ha!

You asked fans on twitter recently what the worst pick up line they’ve ever gotten. What’s yours?

See, I haven’t gotten many lines, but this one was an answer from a Twitter user, that I thought was brilliant, and I gotta say, would have totally worked on me: Girl throws an ice cube on the floor, steps on it, says: “well now that the ice is broken, I’m Sara!”

What is one thing you wish men would consider before approaching women in public spaces?

Ugh, I feel like this question has the potential to open a whole can of worms that I’m not interested in scrambling around after, but … honestly the approach isn’t the problem, if there is any – it’s the aftermath. And that goes for all genders. If someone’s not interested, don’t take offense and just move along. The people that get pissed because they decided to invade your time and space and you didn’t appreciate that, are unbeknownst to themselves displaying such arrogance which is really unattractive. Just my two cents.

What has been the most difficult opportunity you’ve had to pass up due to other commitments?

There’s been a few… Scheduling reasons made me have to pass up “The Greatest Showman.” I was a little bummed about that.

Where would you spend the month of June if you had no other obligations?

I would spend it with my family back in Copenhagen. There’s really nothing like Denmark in the summer. The atmosphere, and what feels like eternal days due to sun never quite setting.. It’s paradise to me.

What is one thing you’d like to shine more of a spotlight on this year?

I advocate strongly for animal rights, so I will always want to shine light on that. There’s also been an undeniable progress illuminating many of the taboo subjects within the social construction of this country in the past couple of years, and I think working on bridging the divide and creating communication without overly aggressive fractional action/reaction patterns are important to prioritize in order to move forward. We’re highlighting a lot of problems, but it seems difficult on focusing to find solutions. Hopefully, this year and the next will pivot in that direction.