You may recognize Analesa Fisher from their role in “Metal Lords,” a project through which they discovered they were a heavy metal fan! Having figured out that in acting, it’s all about going back to the basics, figuring out what makes that character tick, what makes them human… Acting is not the only love in Analesa’s life! “I am, borderline aggressively, dedicated to shark conservation,” they shared wholeheartedly, explaining just how vital it is to save the sharks! Keep reading on and discover more about Analaesa Fisher and their beautiful spirit! 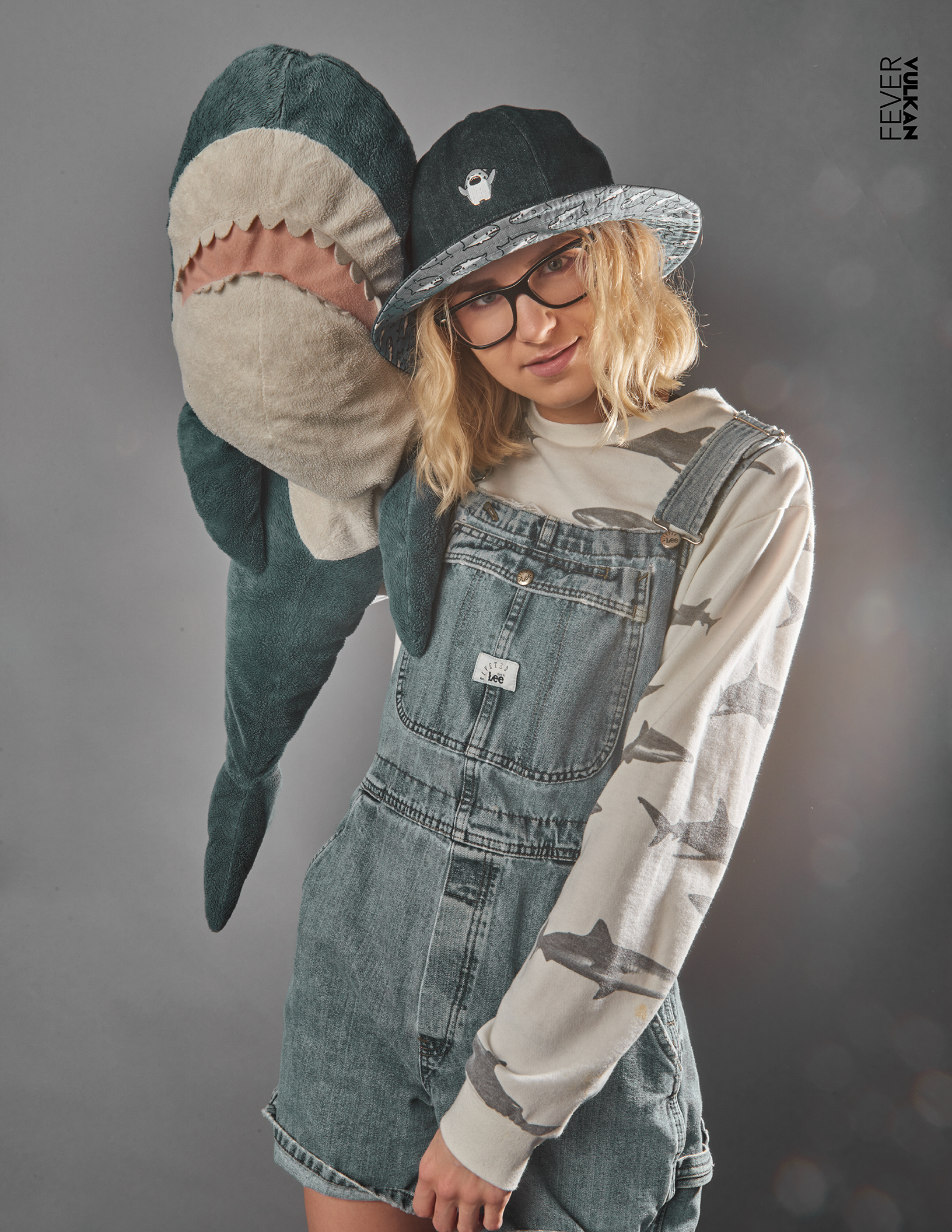 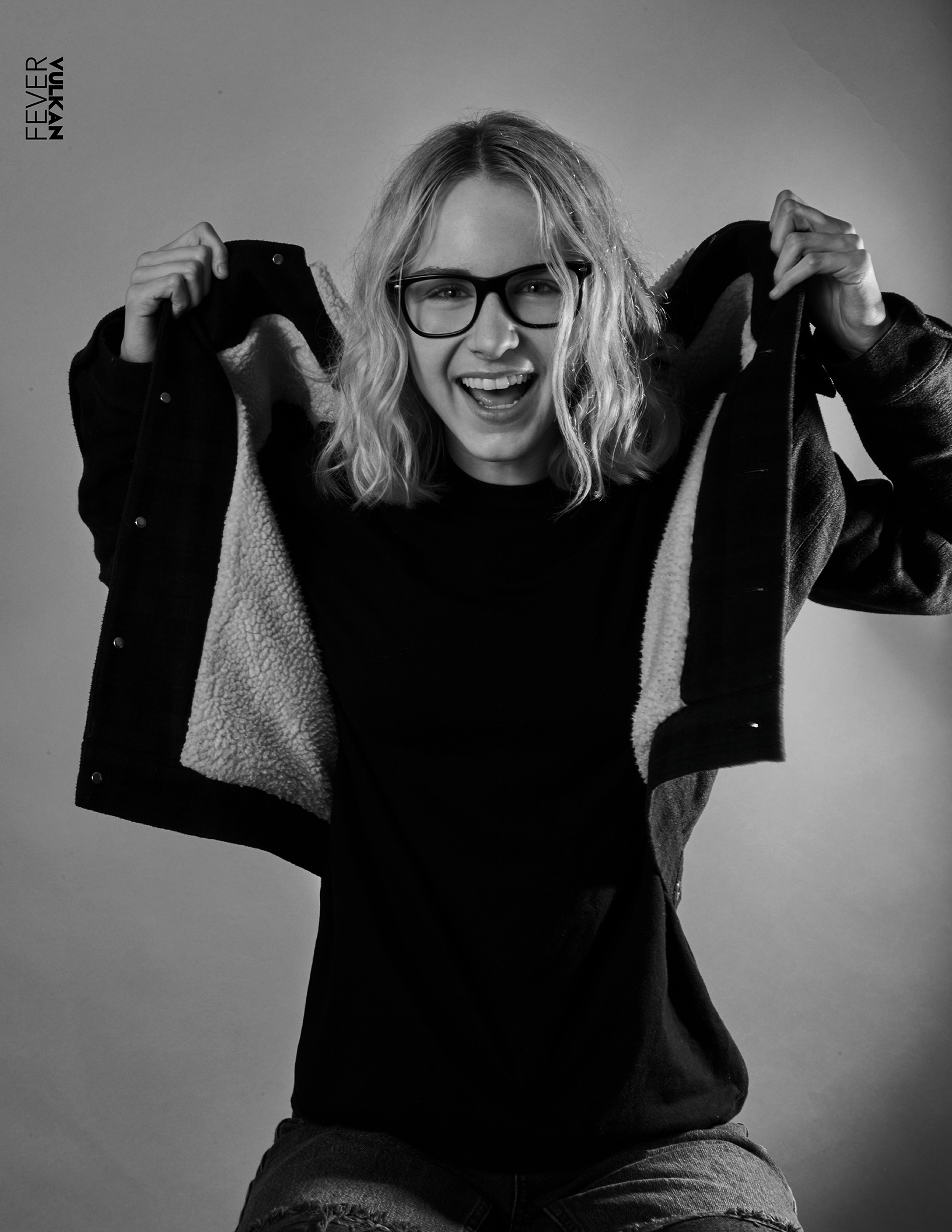 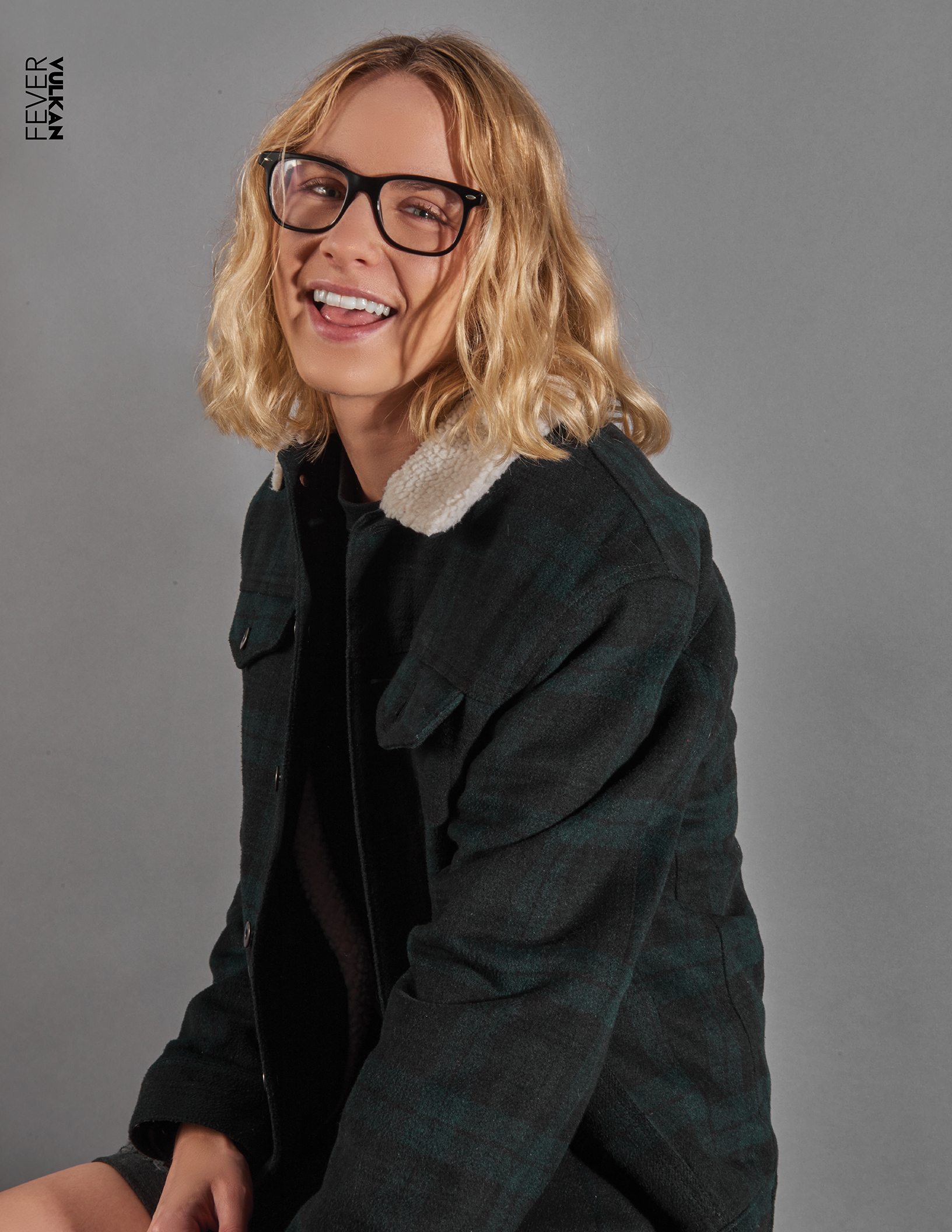 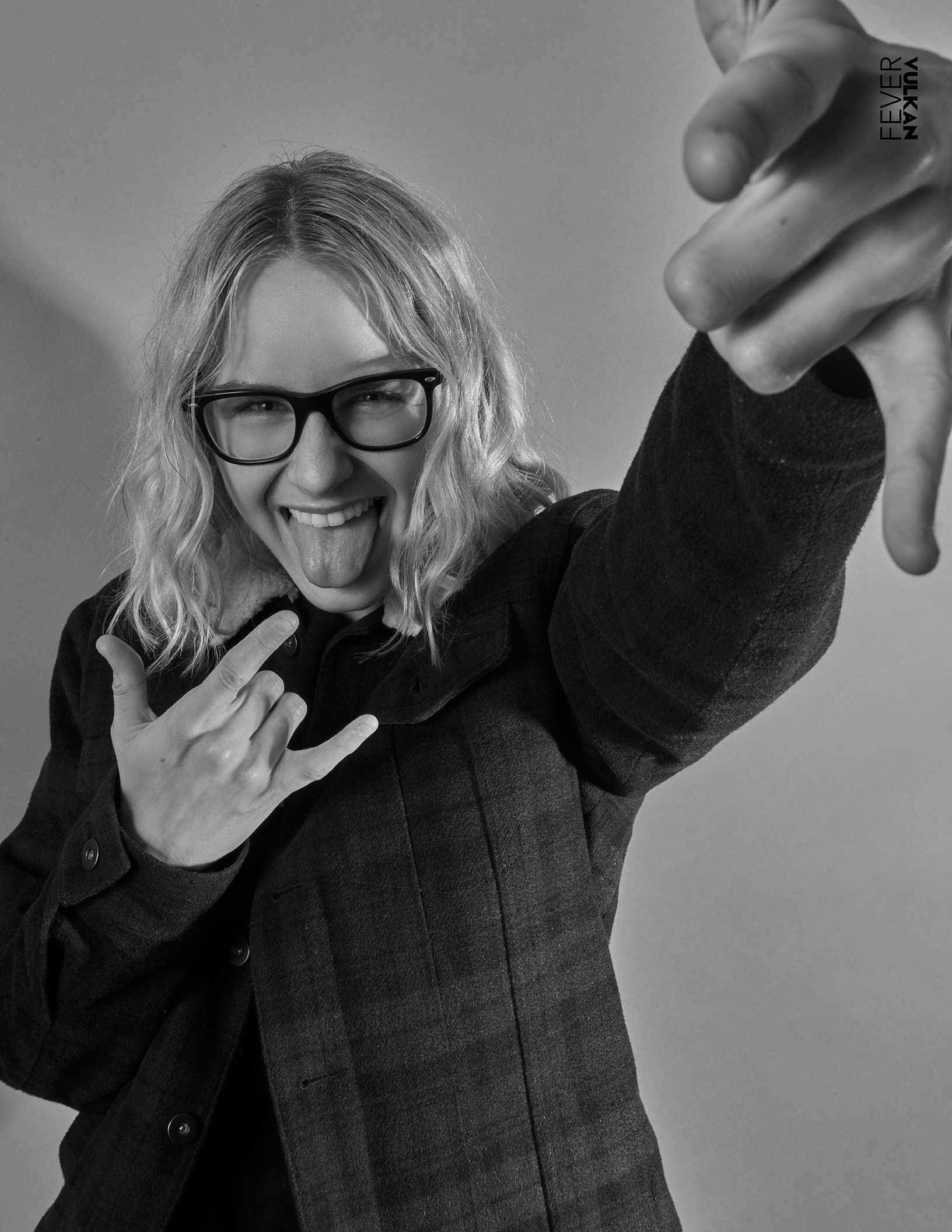 On set, what was one of the most exhilarating experiences you encountered?

I didn’t think I was a heavy metal fan until we started filming “Metal Lords.” I spent a long time in quarantine reading books and researching the history of heavy metal, that by the time we got around to filming that amazing Battle of the Bands scene, I was absolutely hooked. Some of the research I found so interesting about metal music is that it’s known to decrease cortisol levels in the body, which is the chemical that’s produced from stress. More so, when you’re a part of making metal music, it’s found to decrease it by another 60%. Aside from this, what I’m meaning to get to is, getting to play Kevin’s drums on set of the Battle of the Bands stage and headbanging along to “Machinery of Torment” for even 10 seconds when we weren’t filming was one of the most exhilarating experiences of my life. And yes, I’m saving up for my own drum set as we speak.

As an actor, what are the most fundamental rules when taking on tricky characters?

I think, fundamentally, the smartest thing we can do for actors is to always, always, always, go back to the basics. Who is this person, what makes them tick, what makes them human (even if they aren’t). Characters, fictional or not, are still people at the end of the day. Just like how you and I have elements of truth, things that make us tick, things that set us off, tangible goals in life… they do too. Don’t look at it like a tricky character, look at it first like a real person and build from there.

Share with us something you are very passionate about and why.

I am, borderline aggressively, dedicated to shark conservation. People see sharks as these awful, pesky creatures that are better off not in our oceans because of how “dangerous” they are. The harsh reality is, other than being blind puppies of the sea, sharks cause 0-2 deaths on average every single year. Whereas humans kill upwards of 100 million sharks every single year. It’s not only the mass extinction of these incredibly misunderstood creatures that’s the problem, but the problem is also how that affects the ecosystem and food chain of our oceans. If sharks die off, the rest of the food chain will completely crumble, which will cause smaller predators to increase in numbers, which will cause a mass diminishing of the world’s phytoplankton population. Phytoplankton generate more than 85% of the oxygen we breathe and sequester more than four times the amount of carbon dioxide from our air as the Amazon rainforest! So, more phytoplankton in our oceans means less carbon in our air. If we don’t stop the noise population from fishing boats, the horrific murders of sharks across the globe, and the pollution of our oceans within the next few years, our oceans coral reef beds are going to die off, which is going to make the ocean unable to sequester carbon dioxide from our air. Which – in turn – would mean we could all suffocate and die on our own planet. Save the sharks, save the oceans, save the planet! I told you, bordering on aggressive..

Do you believe you have found your purpose in life? Explain.

In an industry like this one, it’s next to impossible to trust that it’ll all just work out if it’s meant to be. To put everything into the universe and hope you’re on the right path. The only thing that I know is, I’ve tried to find something else that makes me happy, and nothing has even come close. My best advice is, if you can find a career that makes you long for Monday mornings just so you can look forward to a whole five days of glorious opportunity and the chance for even more work, a career that makes you absolutely dread Friday evenings because it means everything’s shutting off for a few days… then I think you’ve found what you’re supposed to do.

If you could embody anyone for a day, who would it be and why?

Really any “meat suit” that doesn’t have Juvenile Idiopathic Arthritis and a slew of food allergies would be truly exhilarating to embody for a day. That being said, if I could really choose anyone, I think I’d have to say Gwen Stacy from the Spider-verse. For a similar reason that she owns a sick drum set, doesn’t care what anyone thinks, has superpowers, and is one of the most competent spiders in the multiverse. Truly if I were to switch career paths, crime fighting Spider-Gwen would be at the top of my list.

How did you book your role on “Metal Lords”? What drew you to the role?

Something that I love about Metal Lords is, the story changes depending on who you’re watching. If you watch it from Kevin’s point of view, you’re going to see a VERY different story play out than if you’re watching it from Kendall’s point of view. Kendall is this 17-year-old girl who is so uncomfortable in her own skin she’s literally trapped. There’s a part of her that wants so desperately to find herself but doesn’t even know where to begin. It’s only when she meets someone as different as Kevin, that she realizes things don’t have to be “cool” to everyone for them to be cool to you. Metal music for example is a very polarizing, emotional genre of music. But something that is universally known is how crazy metalheads are. Not crazy in a bad way, but they’ve truly unfiltered themselves. When Kendall sees that that’s possible – that it’s possible to NOT care what other people think – she’s able to finally see who she wants to be.

Everything you audition for is kind of a crapshoot. You never know how far you’re going to go in any process, and because of that I always take every audition as an opportunity to find the positive and negative things about booking it. For Kendall, I just never thought she was in me. I didn’t think in a million years I’d be right for the role. But, as someone who struggled in my own skin for a very long time, living in a world that really wasn’t built for me or my autistic brain, and trying desperately to understand my own gender, I connected with her on a level I didn’t know was possible. One of the craziest things to me was putting on her costume. Poofy, tight dresses, and feminine clothing. Because I felt myself growing inward once I stepped into her clothes. Uncomfortable, wanting to flee, hating every second of it. Most people show up on set in pajamas, but I made sure to bring outfits that reminded me who I was outside of Kendall. That I am confident in my own skin now, and I don’t have to go back to that place. I wouldn’t trade that experience for the world, though. Finding the parts of Kendall that were in me and being able to translate that to screen was really awesome.