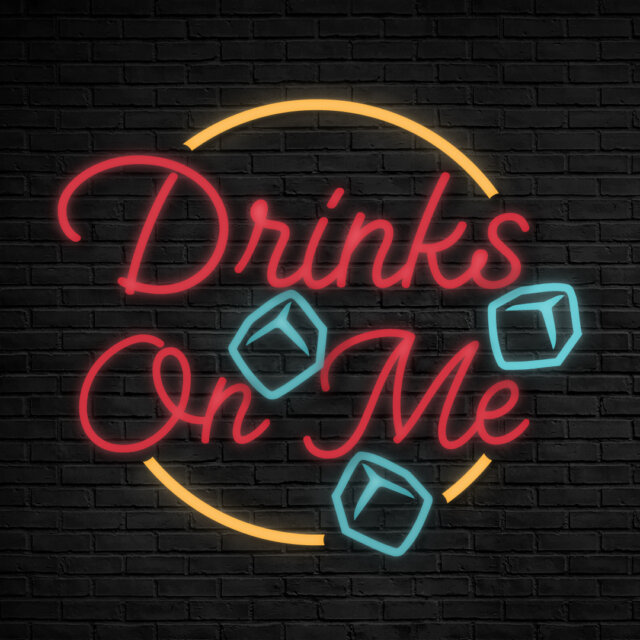 Hailing from Brooklyn, NY, fashion icon and rapper Cezur III is a creative force to be reckoned with. Not only has he been seen modeling for various well known companies such as Vogue, GQ and Nike, but he is also a talented artist, who is getting ready to release his brand new single “Drinks On Me” from his upcoming EP, BK BABY. Check out our interview in which he shares his motivation for the track and just what it means to be a “BK Baby”.

Your upcoming EP, BK BABY, is almost here! How hyped are you to release the project
and what does it personally mean to you to be a BK BABY?

I’m pumped. This project really gave me the foundation for the music I plan to make for years to come. For years, people have been asking when it would come, but I needed to take my time to cultivate something meaningful.

The term “BK BABY” encapsulates my experience growing up. When you’re from Brooklyn, you move a certain way, you talk a certain way. Coming up in the hood, I embraced that vibe. Now everywhere I go, I make sure people know “BK BABY” because I wear it on my sleeve. 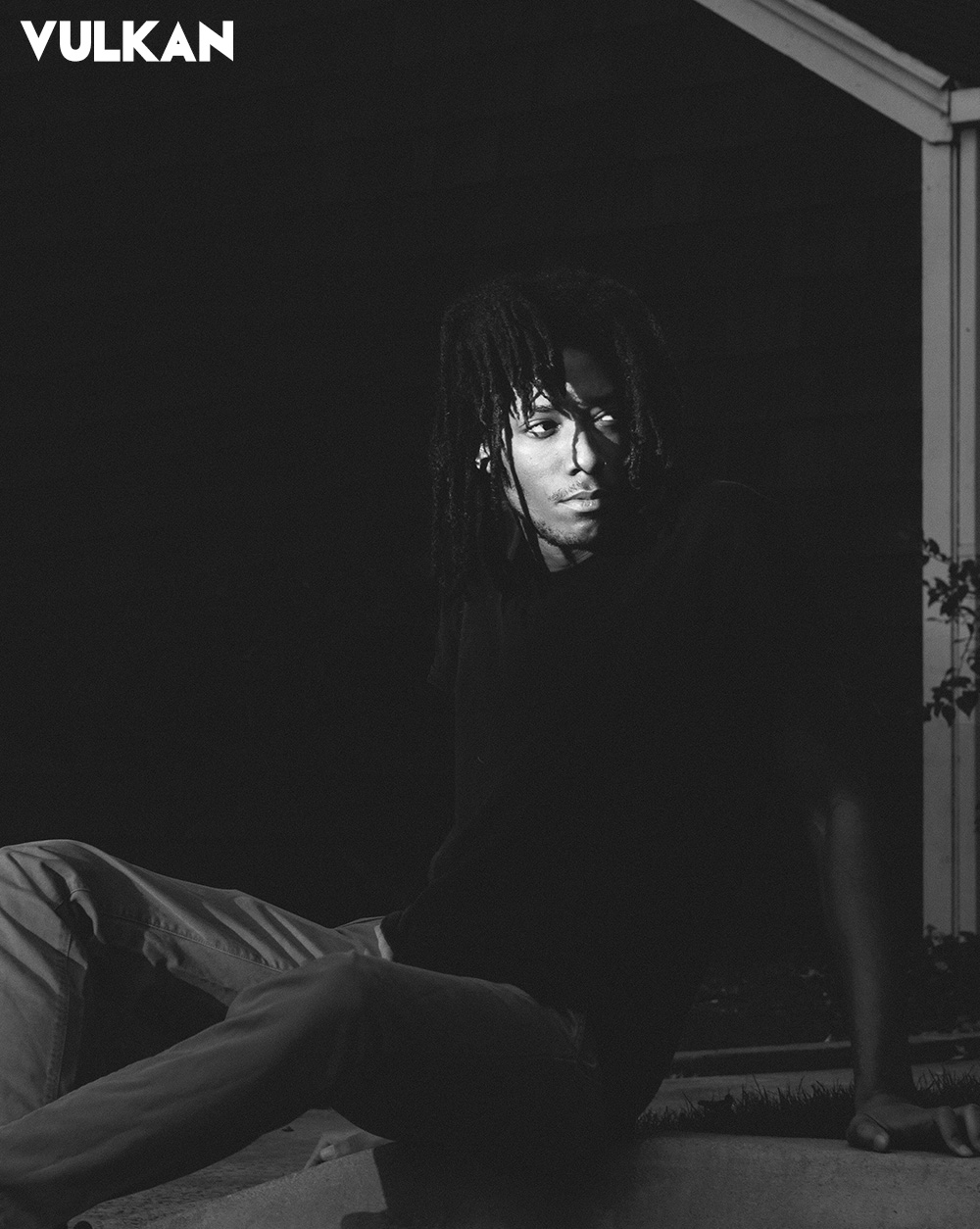 On December 4, fans will finally be able to stream and listen to your brand new single, “Drinks On Me” ft. Jessica Universe. What served as the main inspiration for the song and what was the process like for recording the track?

I wanted to make a fun song. All too often we as artists take ourselves too seriously; this record was an attempt to just go with the vibe. We took some chords from an old record that never came out and gave it new life. I’d known of Jessica Universe for a while through her working
relationship with my producer Jae Lee. I had him send it over to her, and she KILLED it immediately.

Your sound has been described as a beautiful fusion of house, punk, and hip-hop – who
are some of your favorite artists to listen to and why?

I have tons of artists and genres I love listening to. Some of my favorite artists right now include slowthai, Brent Faiyaz , And Amp, Burna Boy. You can also throw in Baby Keem, and Trippie Redd. I’m a fan of people who don’t sound like everything and everyone else. When it hits my soul, it hits my soul *laughs*

Have you always been interested in the arts? When did you start realizing that you had a knack for making music?

I’ve always been interested in the arts, but I started becoming more serious after high school. My house burned down my freshman year of college, and I started pursuing music because of it. When I felt like I lost everything, music helped me keep my sanity. When I started putting out singles, people would tell me they really enjoyed the material — I guess that was enough for me to keep going. 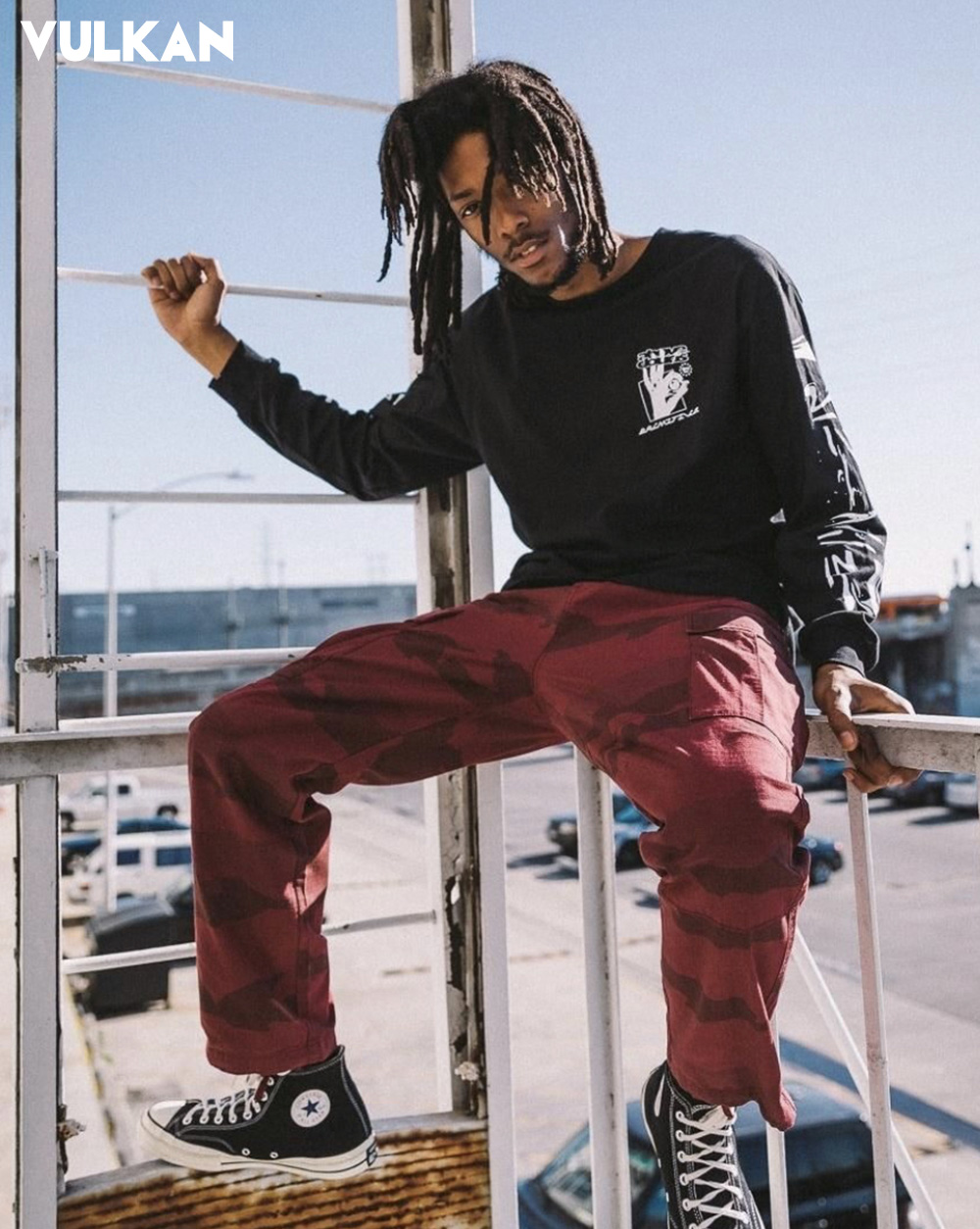 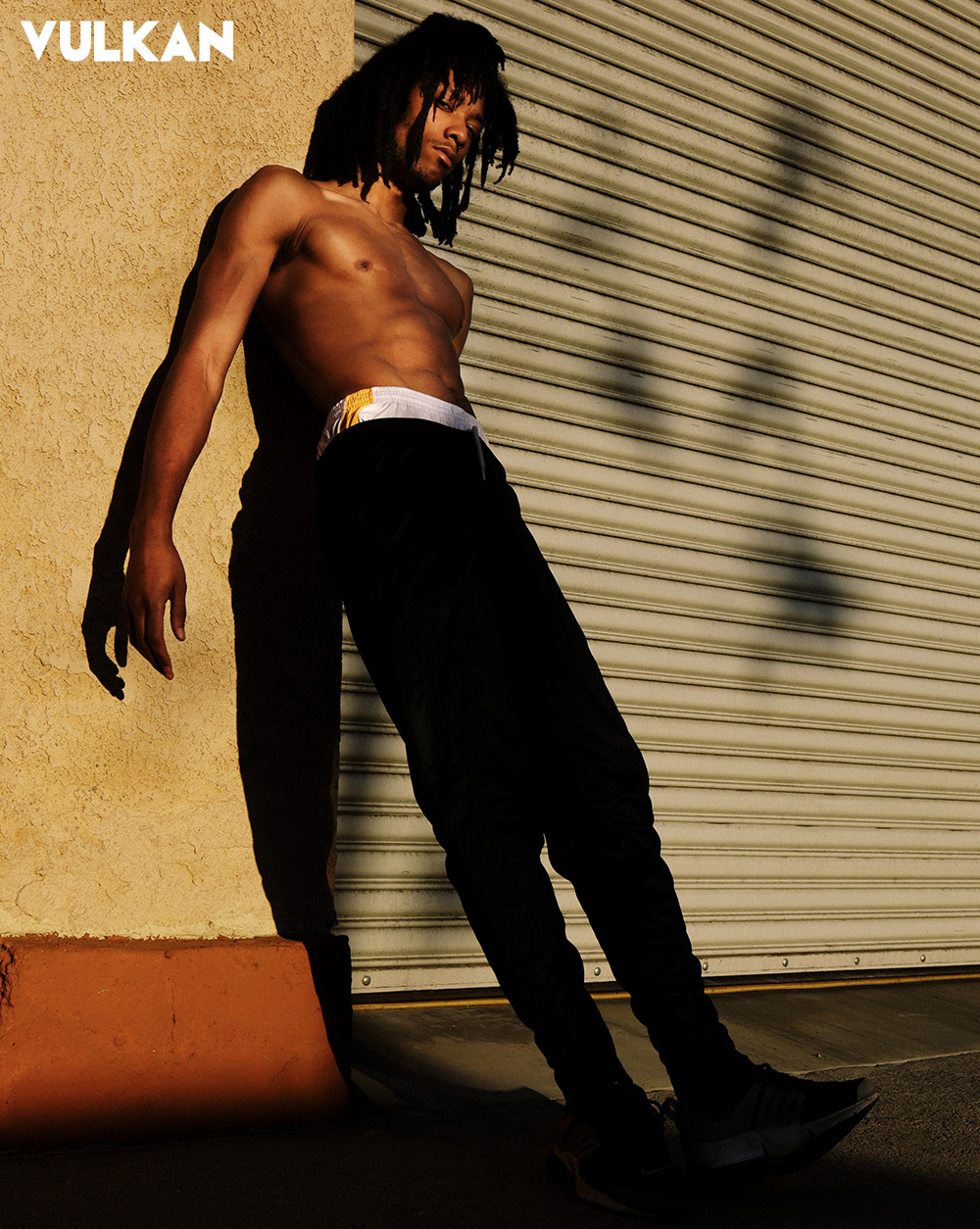 You can also be seen in numerous fashion campaigns, modeling for some of the hottest brands in the game such as Vogue, GQ, Nike, All Saints, and even Wrangler. How did you get into modeling?

People always told me to get into modeling. My love for fashion was enough for me to be curious. I had a close friend who worked within the industry for over 20 years; he recommended me to my first agent, and the rest is history.

What has modeling taught you about your style, creativity, and overall vibe?

I think modeling really helped me gain more confidence in front of the camera. I was always performing in front of people, but it felt different with modeling. I’m comfortable with being the guy in the room to make you double-back like, “What is he wearing?” It’s all an extension of
self.

How long have you been growing your hair? Do your locks stand as a symbol for something deeper?

I’ve been growing my hair for about four and a half years now, give or take a few months. For me, I’ve grown my locs Freeform–which means I allowed them to loc up as they pleased. I do think it’s a spiritual process. You go through phases, and letting it grow freely gives it more personality. This process is so specific to each individual, I felt empowered embracing it. 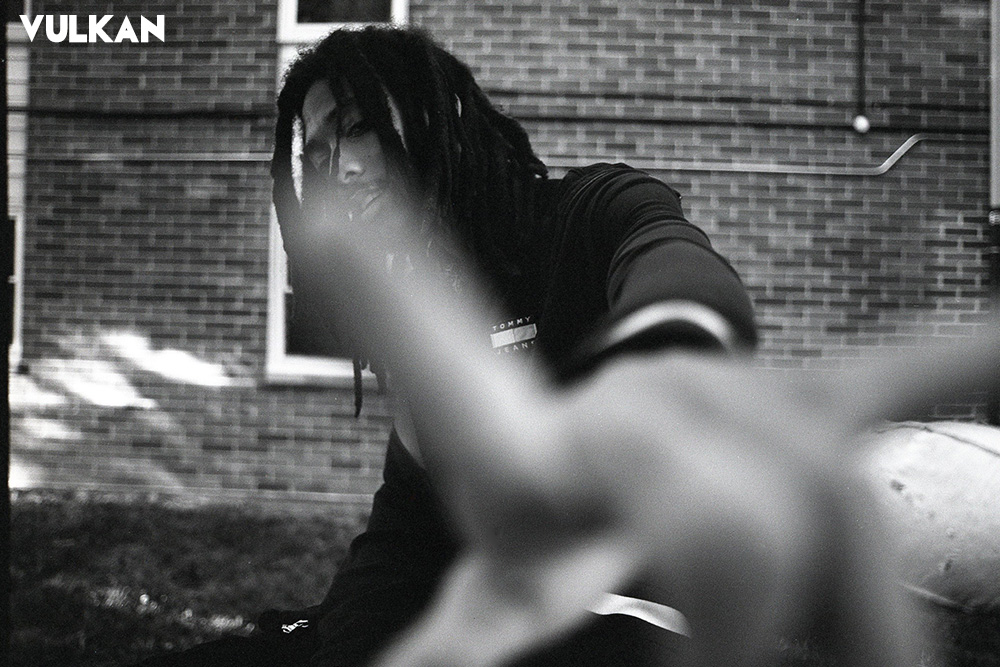 When did you start seeing yourself as more than just a fashion model?

I was never just a fashion model. The music always came first — even when I signed with my agencies, they all understood that going in. I am an artist, and I use all of my outlets to express myself, whether that be on a stage or in front of a camera. I never want to be pigeon holed in
any regard.

What was it like to grow up in Brooklyn and how would you describe the creative scene
out there?

Man, growing up in Brooklyn was awesome. Granted, there was adversity, but I wouldn’t trade my experience for anything. The culture in that place is unparalleled . People in Brooklyn are go-getters, hustlers. That energy is pulsing through the city. There are pockets of creatives of all sorts everywhere.

Who are your top 5 favorite New York artists?

This is a hard one …I’d say Biggie , and Jay Z obviously. 50 Cent was one of my all-time favorites and I really have to big up Pop Smoke because he felt like authentic Brooklyn, and put on so much for the city. Outside of Hip Hop, I’m a big fan of Saint Jhn; that guy’s got it.

Having accomplished so much already, we know you have BIG plans for yourself. What are some of your goals for next year?

Well after I release BK BABY, I hope to go on tour. I want to spend much of next year doing shows across the world; performing is the best part of making the music. Beyond that, I’m working to release our premiere bags. We’ve been perfecting our ZERO58: Body Kits for some time, and I think we’re ready for the world to have them. 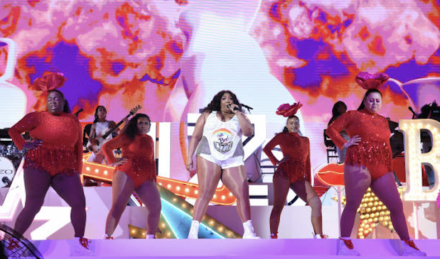 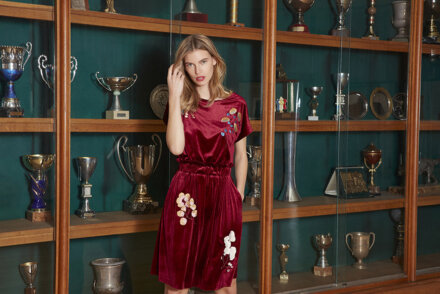 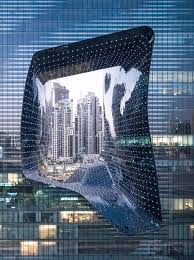 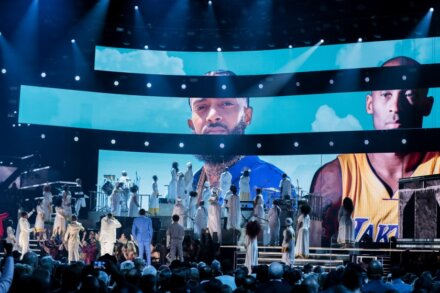