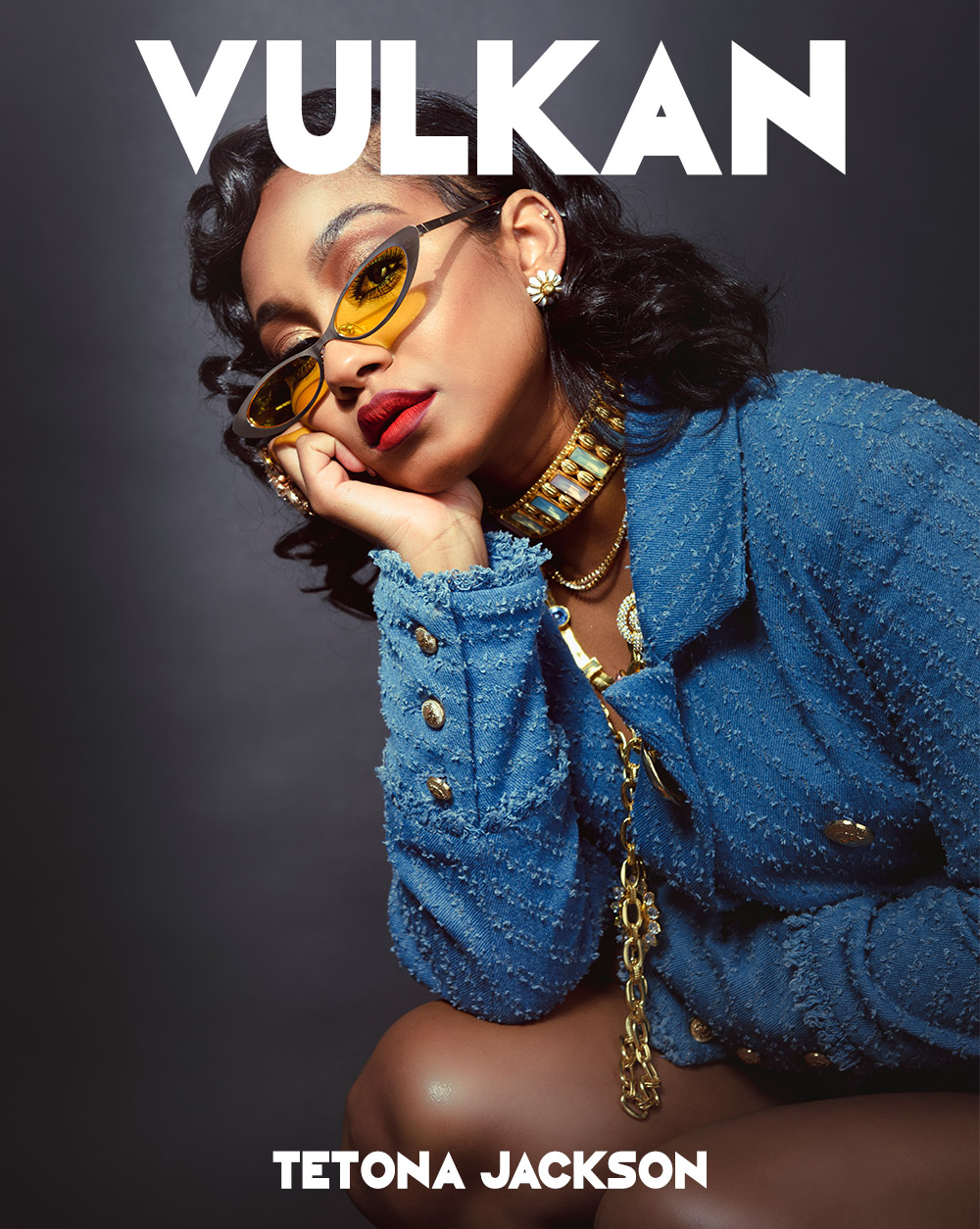 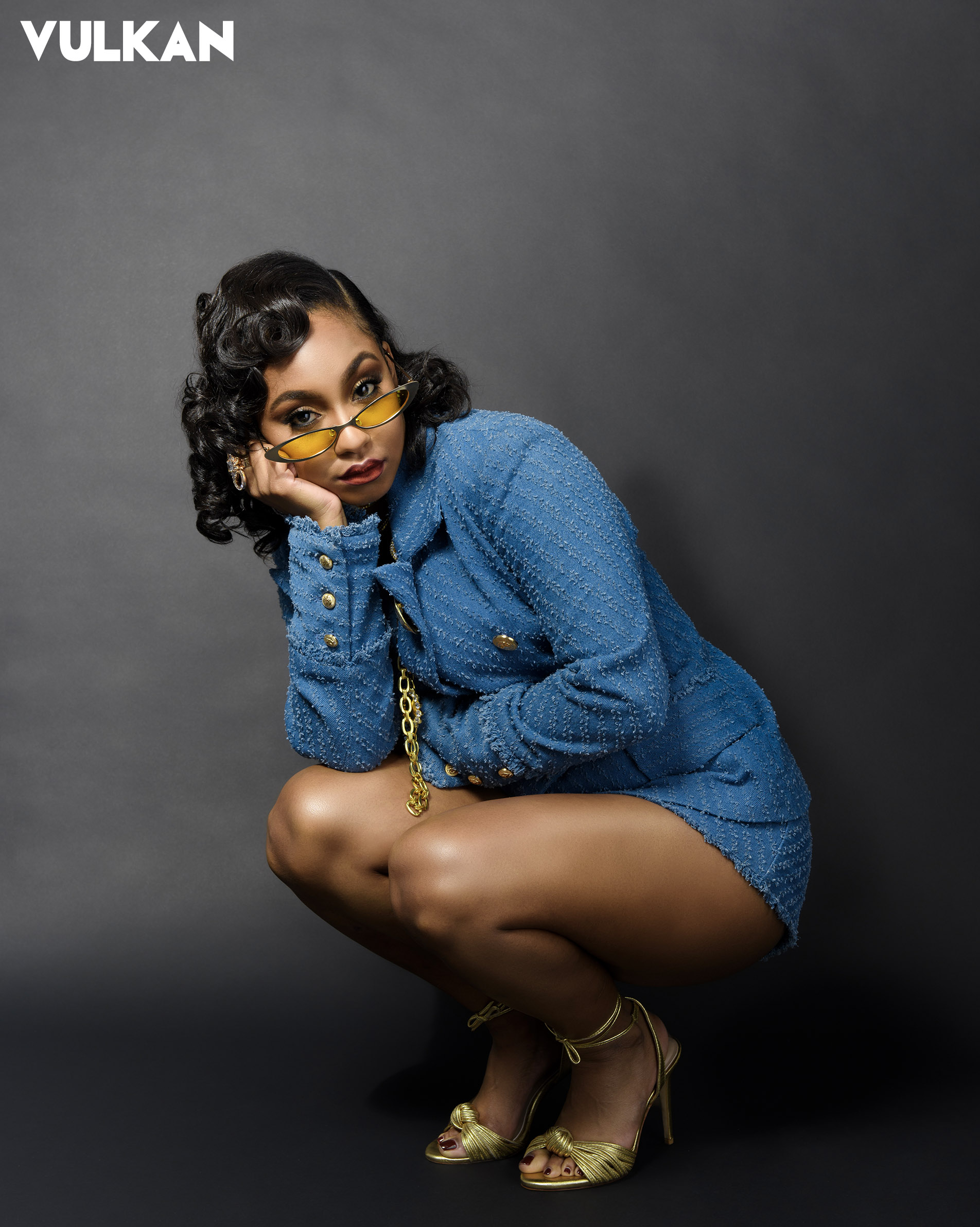 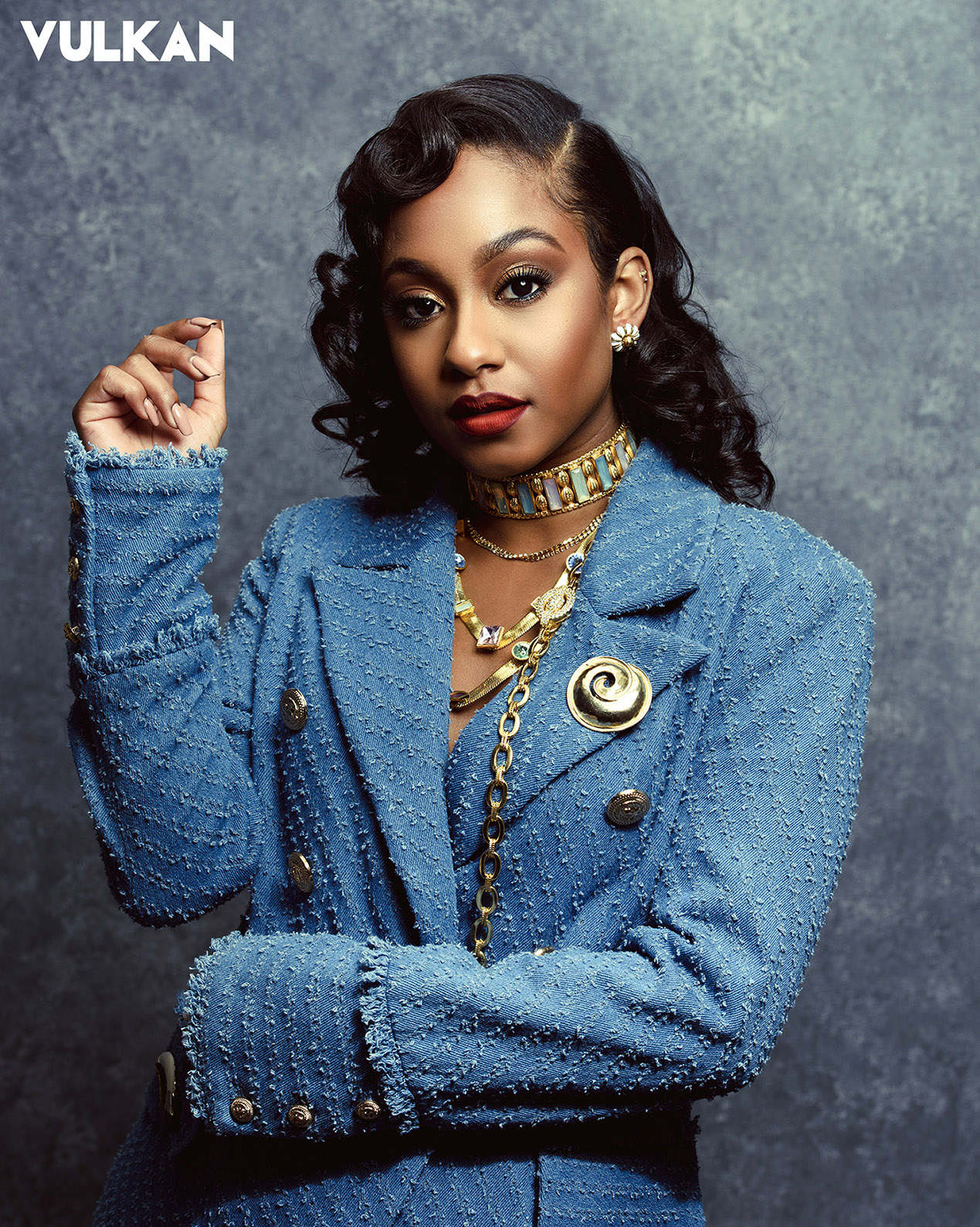 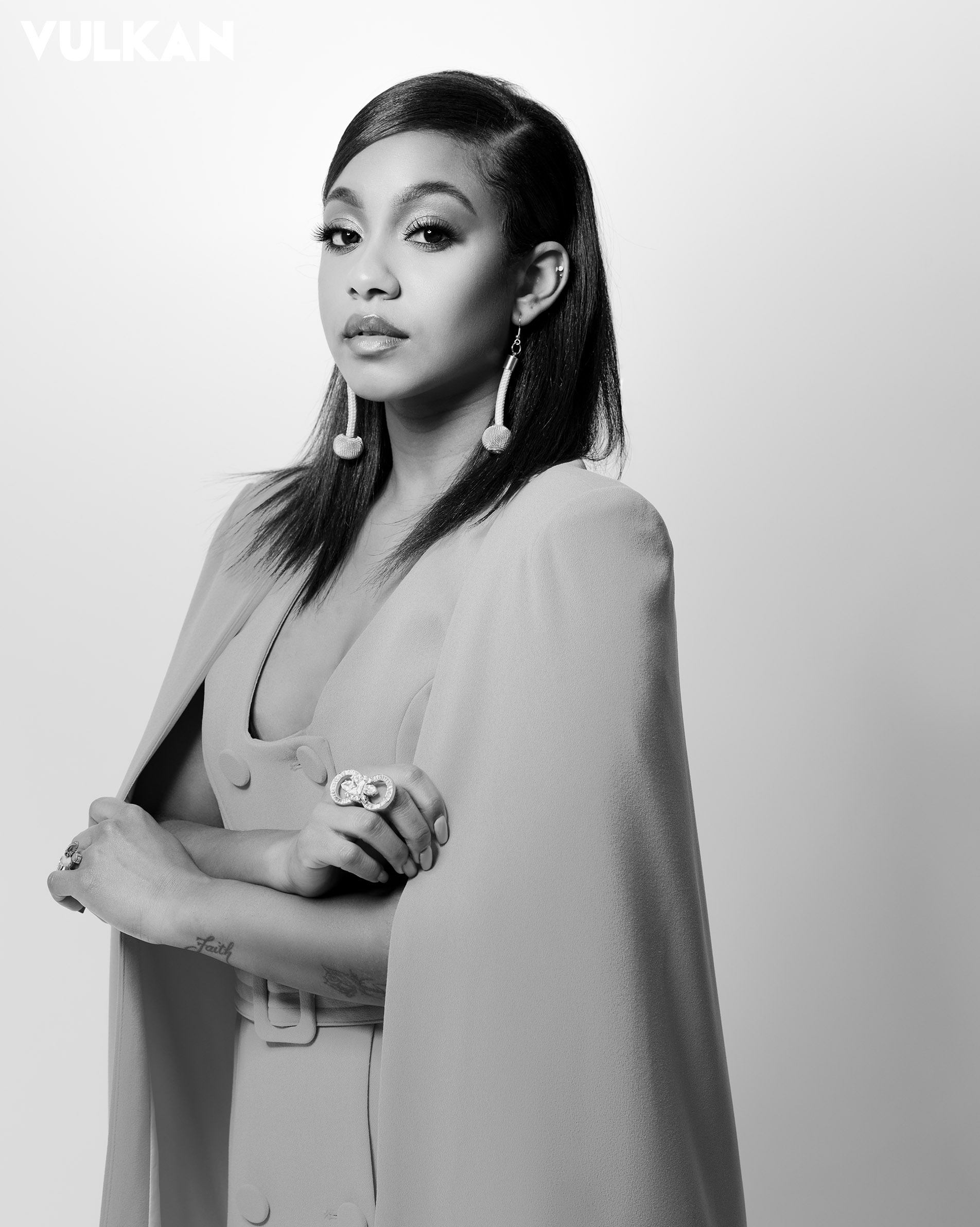 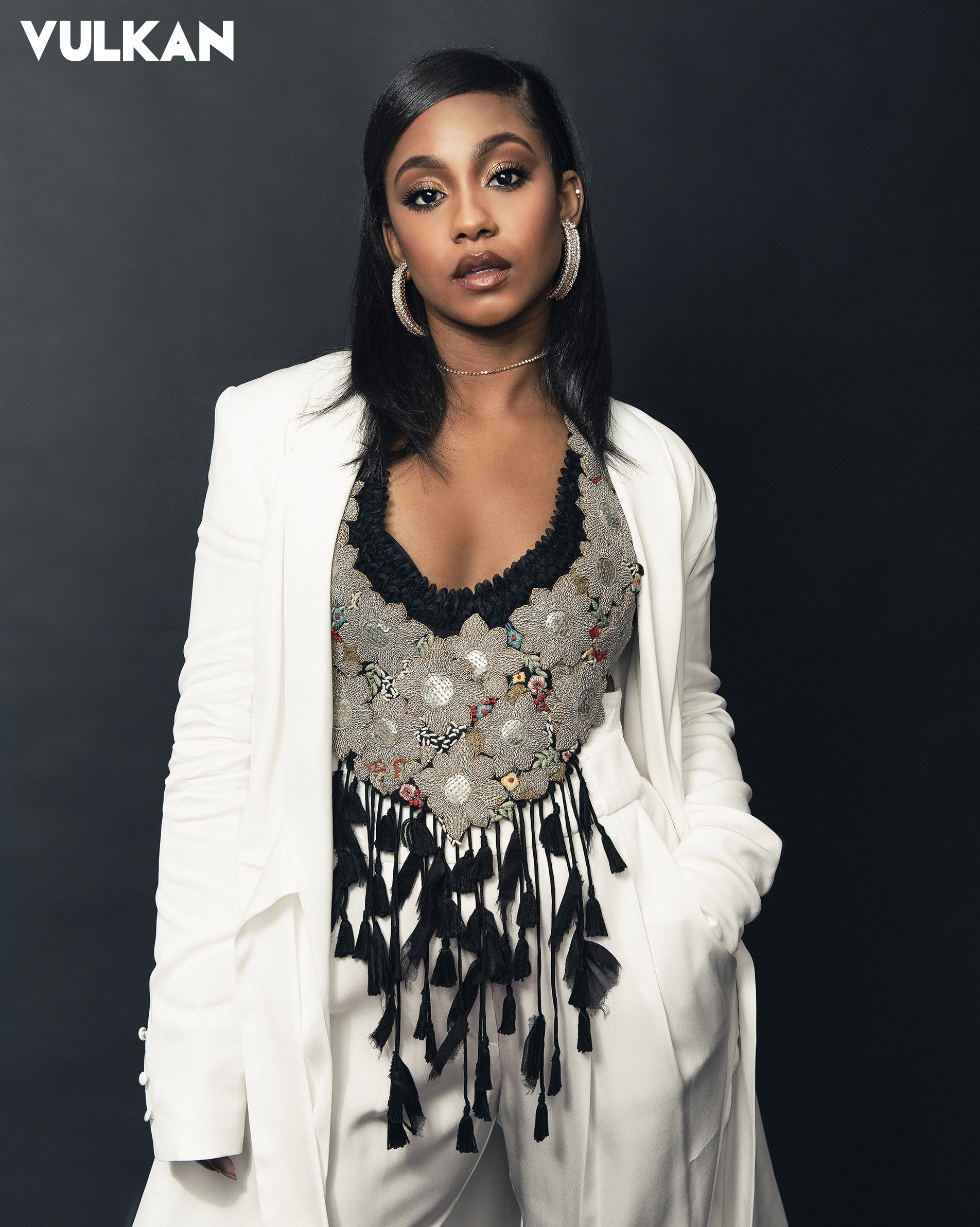 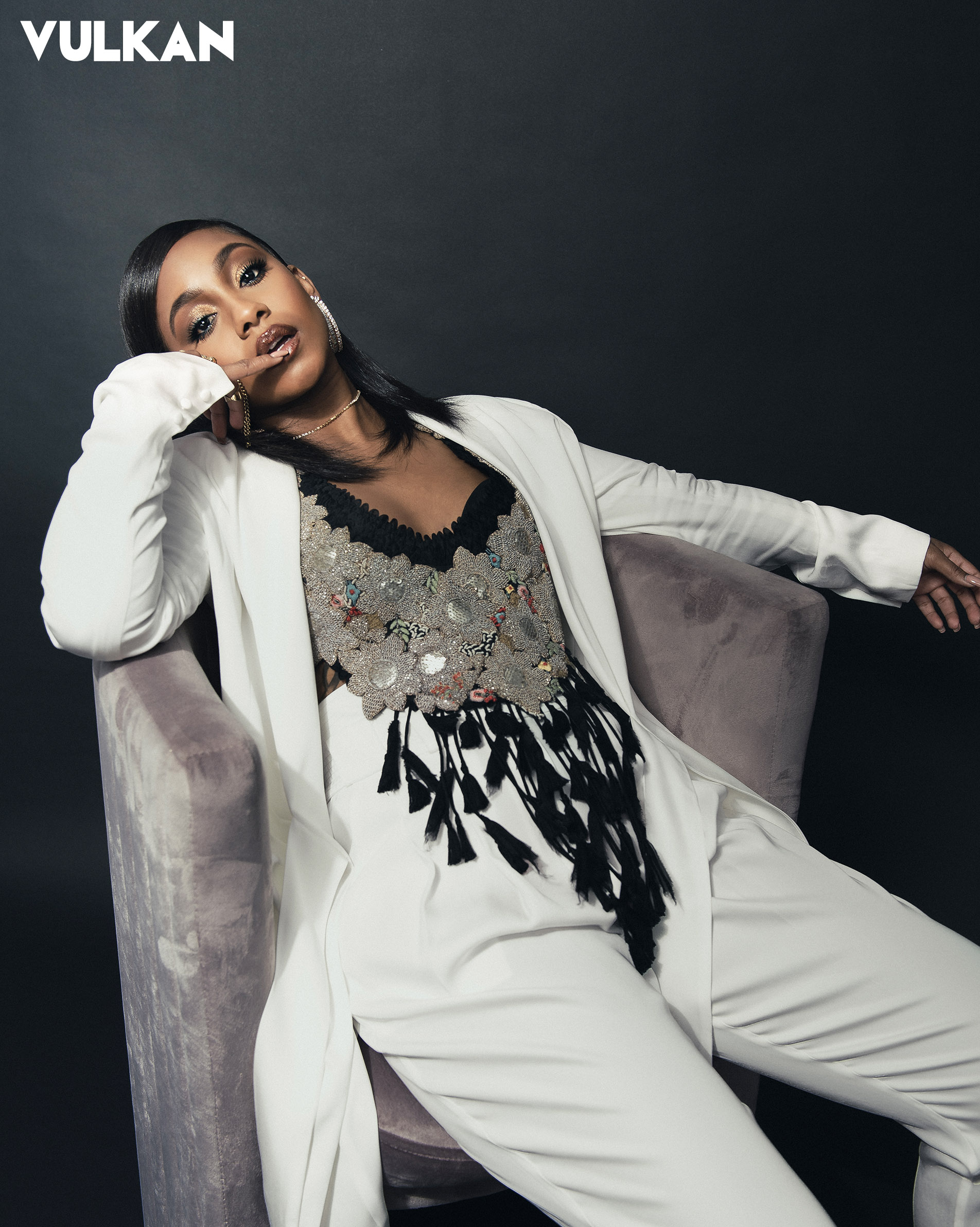 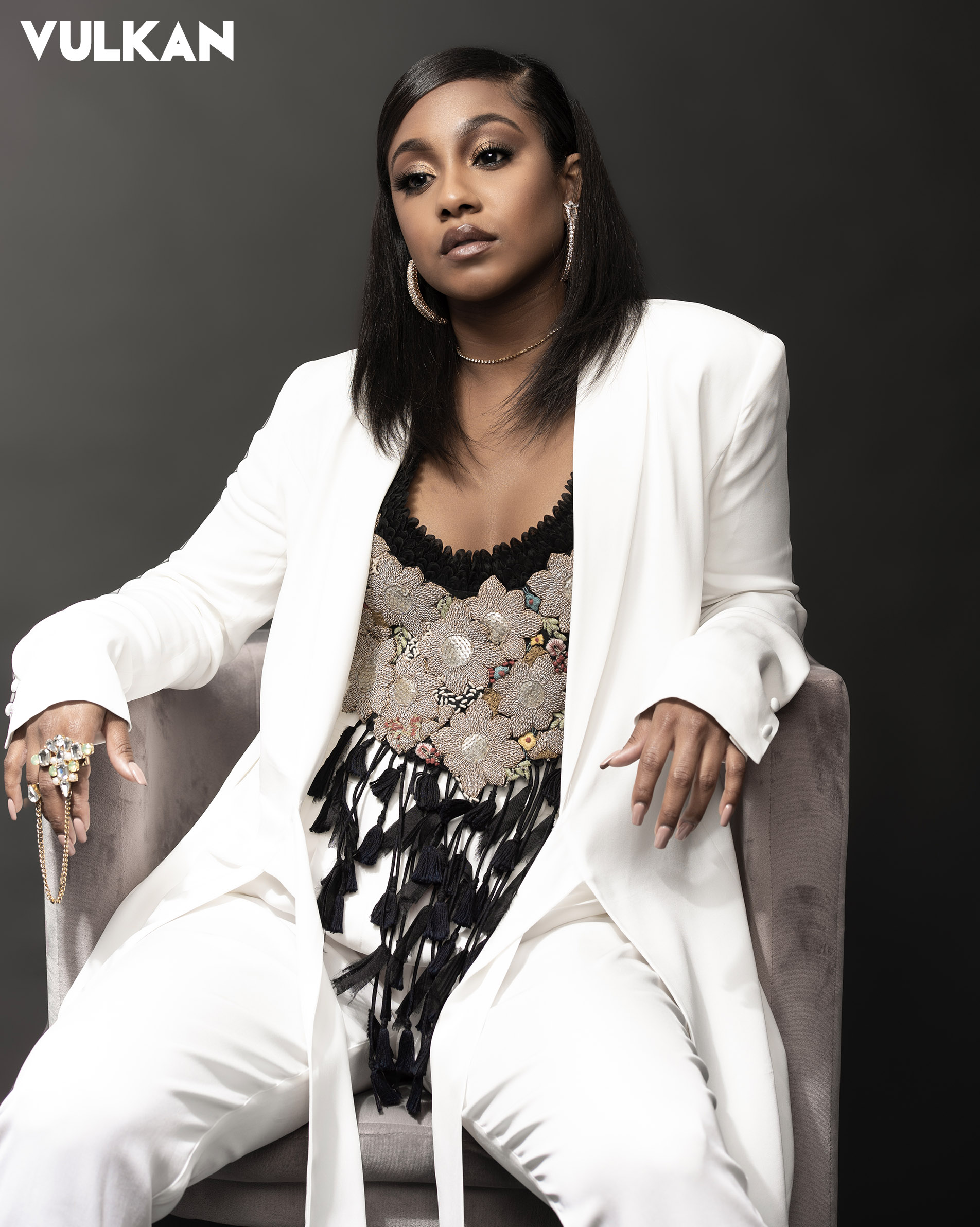 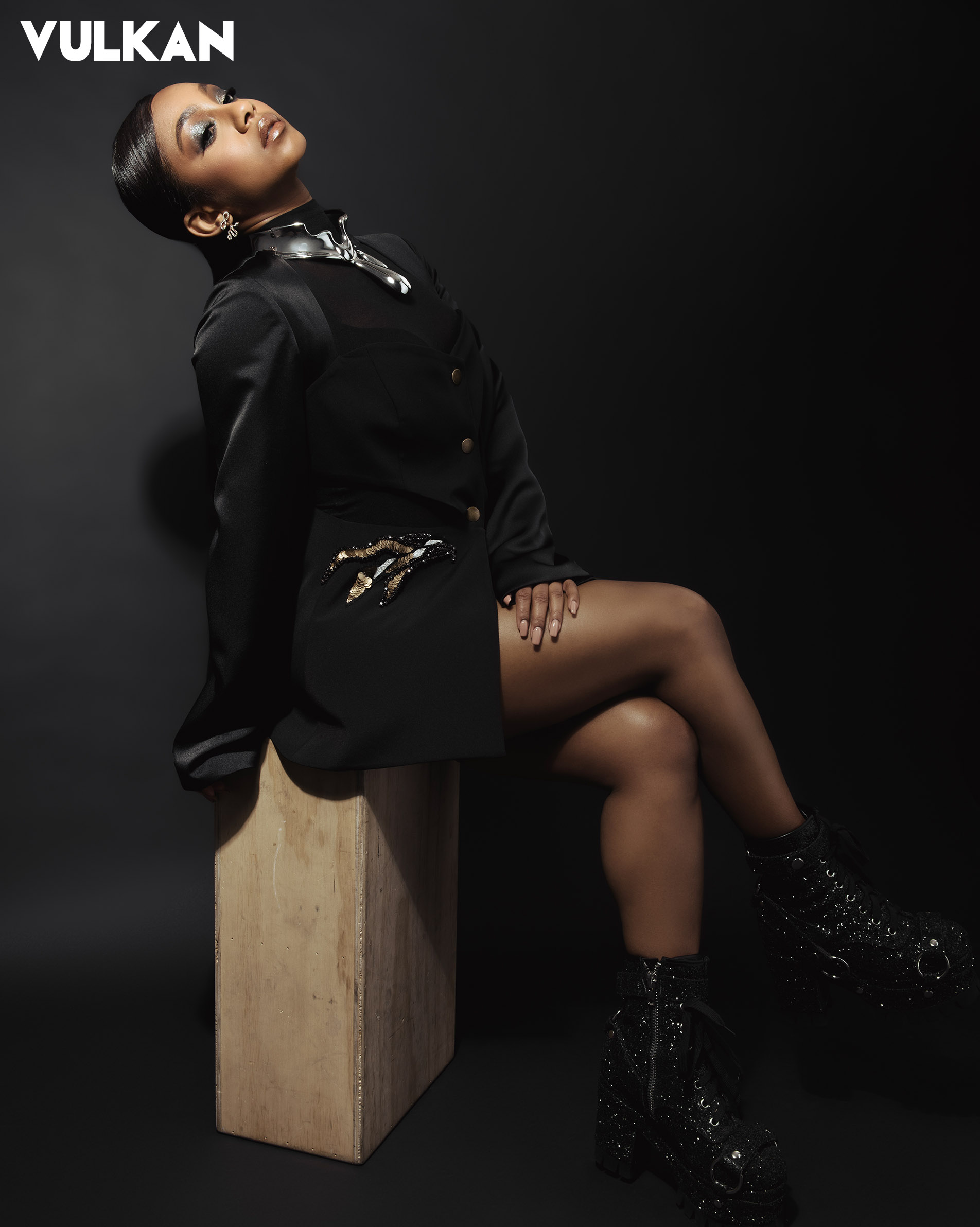 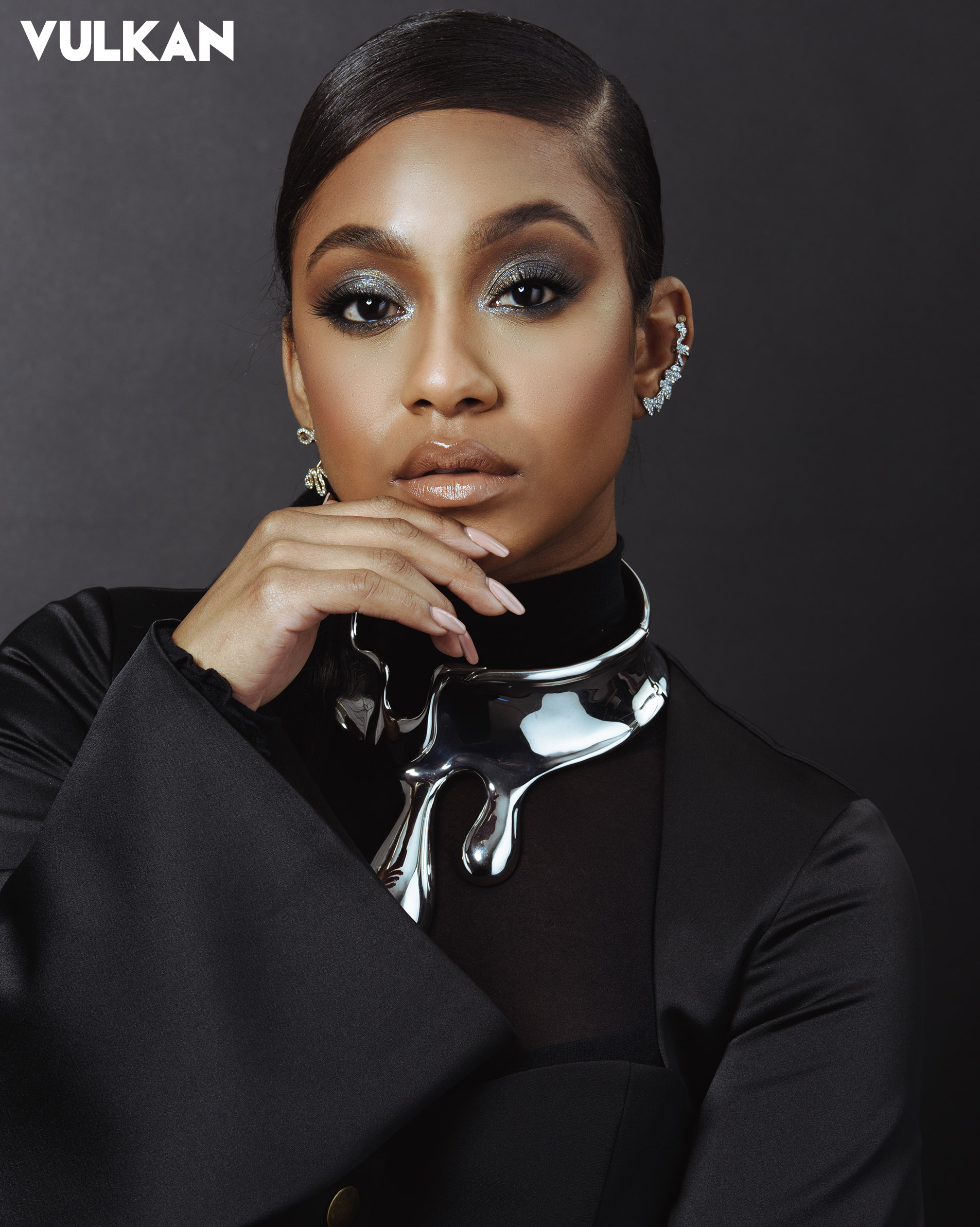 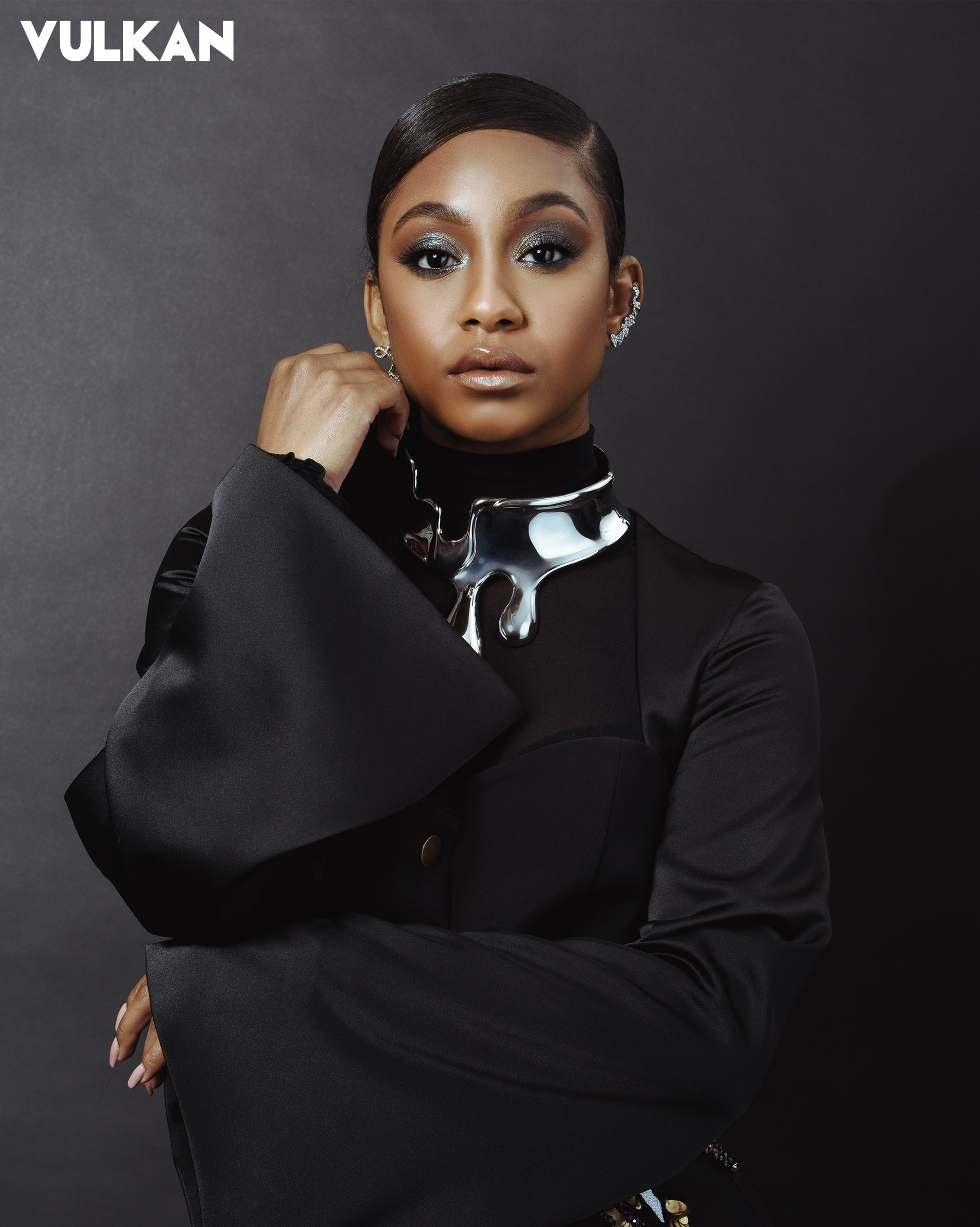 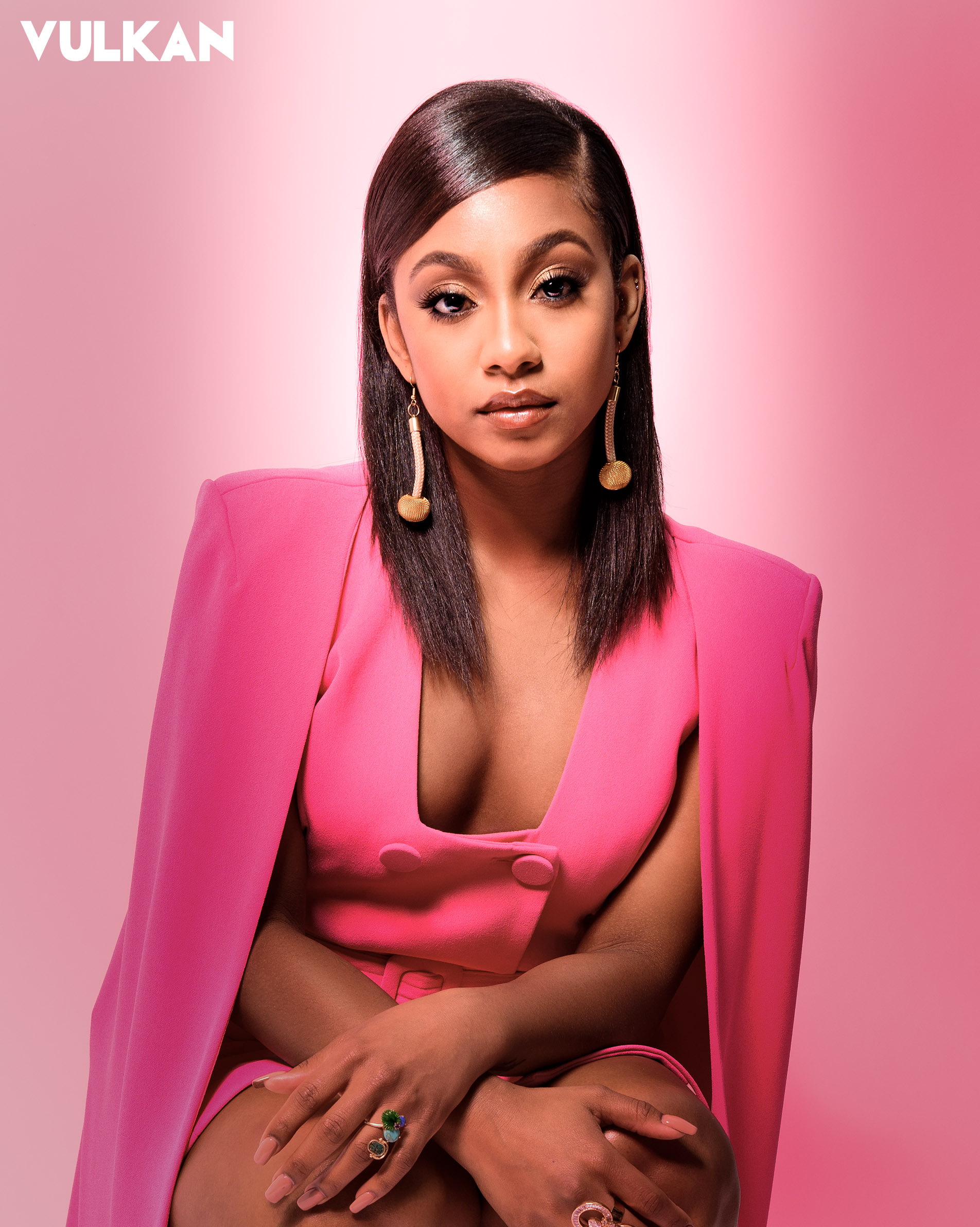 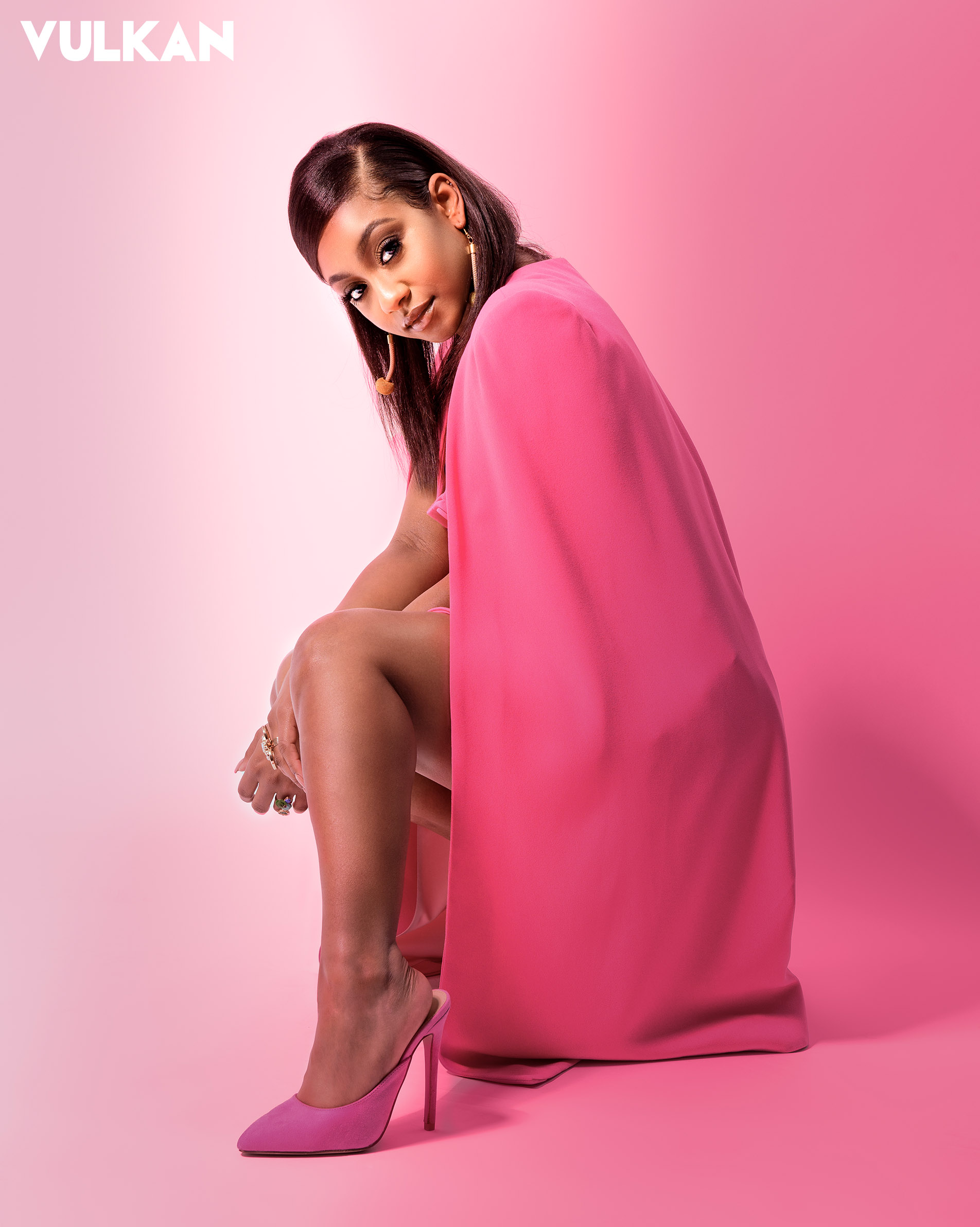 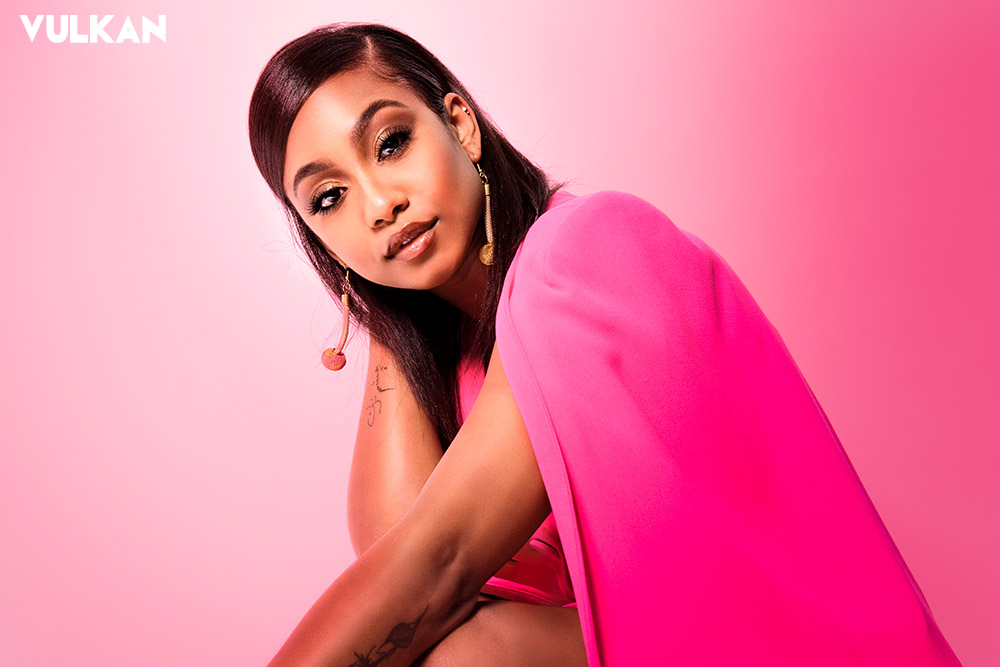 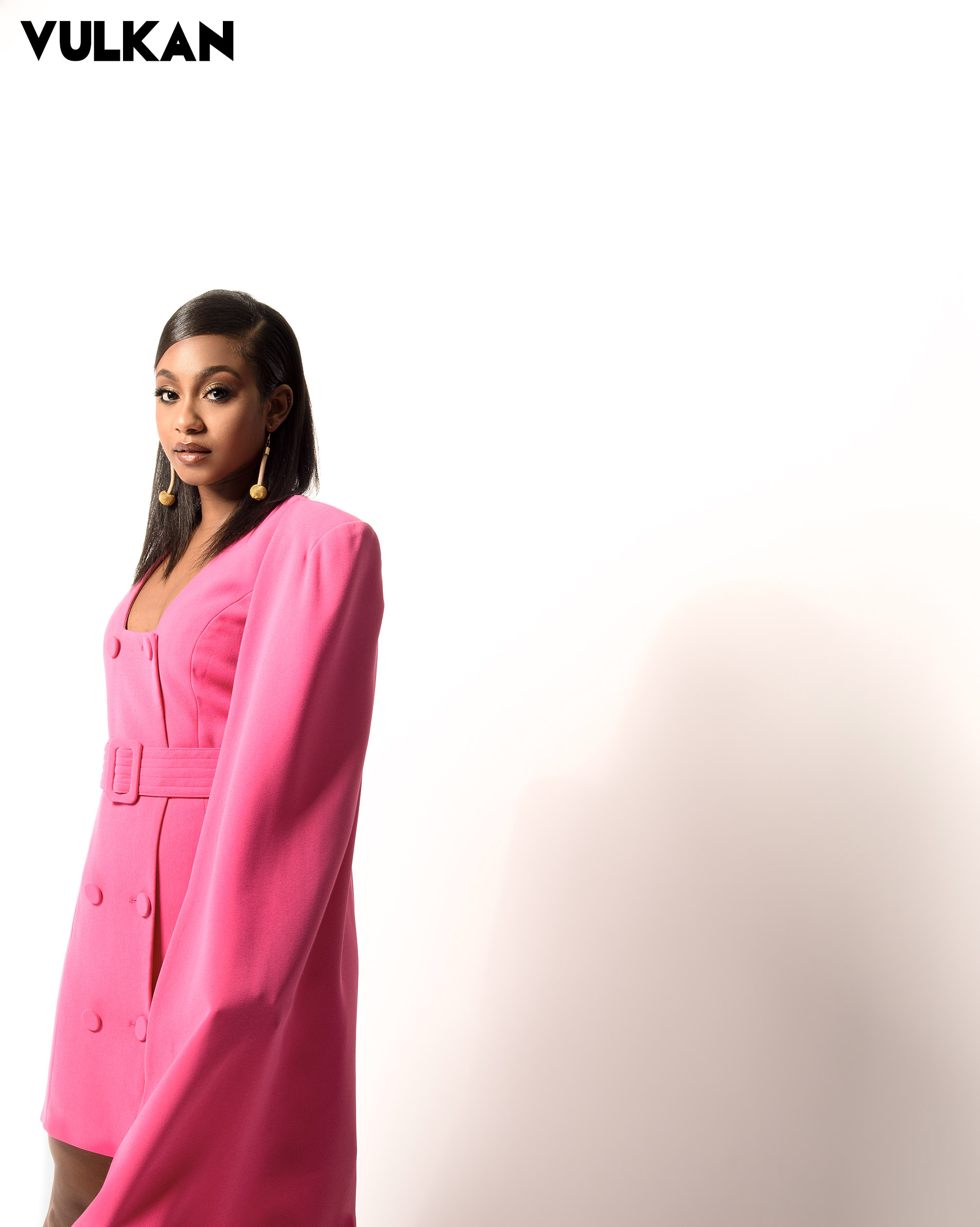 Tetona Jackson Would Like to Connect with You
by Michael Jacobo

Tetona Jackson has a memory of when she was a child and going to see her jazz musician father, the saxophonist Fred Jackson, Jr., play in concert. Fred played with artists like Earth, Wind and Fire, The Temptations, and Aretha Franklin. Jackson recalls seeing the Queen of Soul from backstage: “You know when she hit that stage, the way she communicated with her fans…” Jackson shared. “That connection that they made and they had through her music was something that I found intriguing. That’s kinda where it all started for me.”

Jackson is able to take a leaf out of Ms. Franklin’s book when it comes to her work. As the star of the BET drama Boomerang, Jackson plays Simone Graham, a marketing professional following in the footsteps of her highly successful parents. The series is a continuation of the 1992 classic film of the same name: Graham is the child of the film’s leads Marcus Graham and Angela Lewis, played by Eddie Murphy and Halle Berry, respectively.

On what got her attracted to the role of Simone, Jackson says “One of the things I loved about her upfront from the first episode was how confident she was and how sassy she was. She wasn’t afraid to speak her mind.” Yet, the challenge of stepping into a world established by actors such as Murphy and Berry was not lost on her. “One of the things I was nervous about was that it’s such a classic movie, it’s iconic,” Jackson said. “But I kind of had to put that aside because you can’t go into anything with fear, otherwise it’s gonna show and it’s not going to blossom the way you want it to blossom.”

Jackson definitely blossoms as Simone on Boomerang, now in its second season. Aside from making the character her own, the personality and charisma can be attributed to Jackson wanting to represent the characters she plays well. Before Boomerang, she starred as Cassie, an openly gay high schooler on Hulu’s All Night. “What I loved about [Cassie] was that she was openly gay and very proud to be who she was and comfortable in her own skin,” Jackson shared. “You don’t get to see the youth portraying a queer character comfortably on screen.” She likens that desire to playing Simone: “Growing up I didn’t get to see a lot of people like me, so being able to represent the African-American community, or just people of color is very important for people to see.”

This is where Jackson’s depth to her acting is similar to Franklin’s depth of owning the stage, the way she would communicate with her fans. “That’s one of the things I love as an actress,” Jackson explains. “You may not have gone through what this character’s gone through, but someone watching TV might have, and to be able to connect with them and for them to know that they’re not alone in what they’re going through is one of the things I love about acting.”

Since the shelter-in-place order in California has taken effect, Jackson has been “trying to stay sane. Stay healthy, stay sane.” She shares that grocery shopping has become the highlight of her week, and that she is still, as her Instagram bio suggests, a professional coffee drinker and pizza eater. She’s also found a new hobby. “One thing I noticed since this quarantine hit: I love to cook.” The best meal she’s whipped up in quarantine? “I made an identical In-N-Out burger the other day from scratch. I made the sauce from scratch, I made the patties, everything, from scratch.”

Jackson has also found ways to communicate with her fans: she recently uploaded a Q&A video on her YouTube channel, answering questions her Twitter followers had asked her, like where she sees herself in 5 years, and which historical figure she’d like to meet if she could go back in time. She hasn’t let these uncertain times get to her. Like Simone, Cassie, and Aretha, she’s powering through and overcoming her challenges, and she knows she can’t do it alone. After all, it’s what led her to where she’s at now. “I wanna do something in entertainment,” she recalls from that time seeing Aretha Franklin on stage, “to be able to connect with people.”