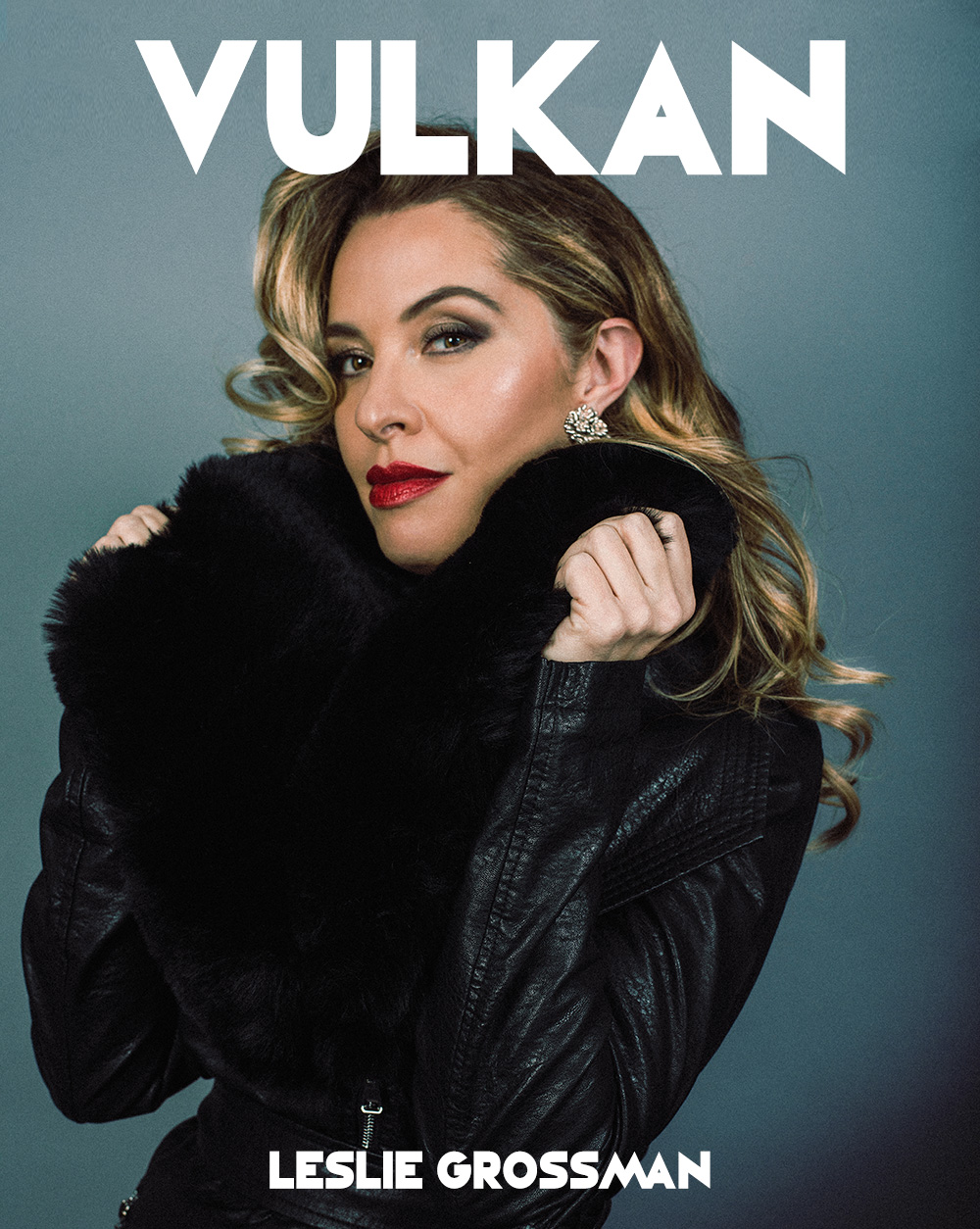 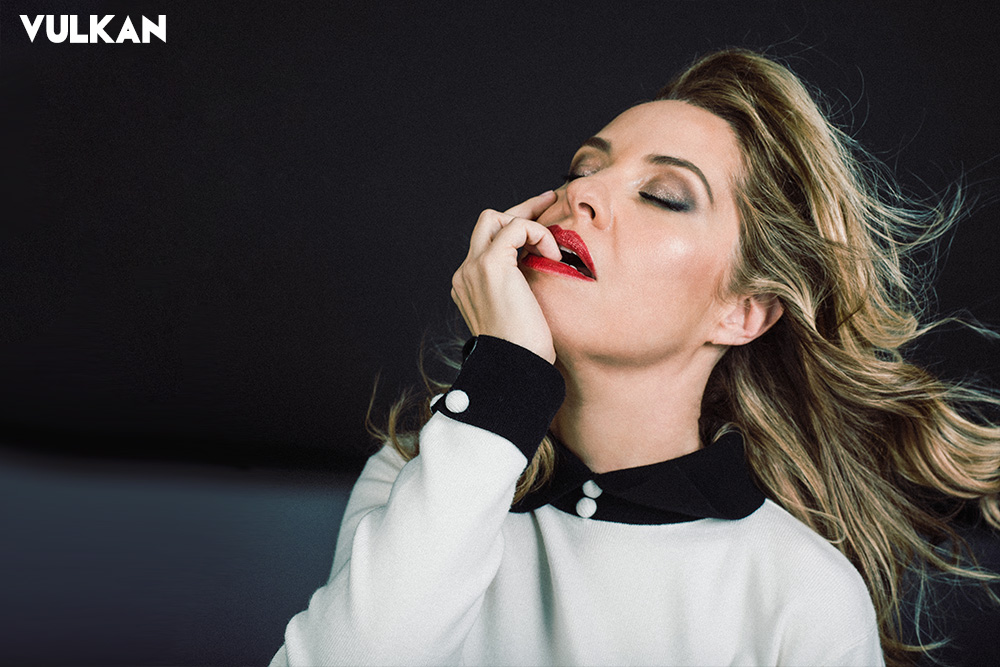 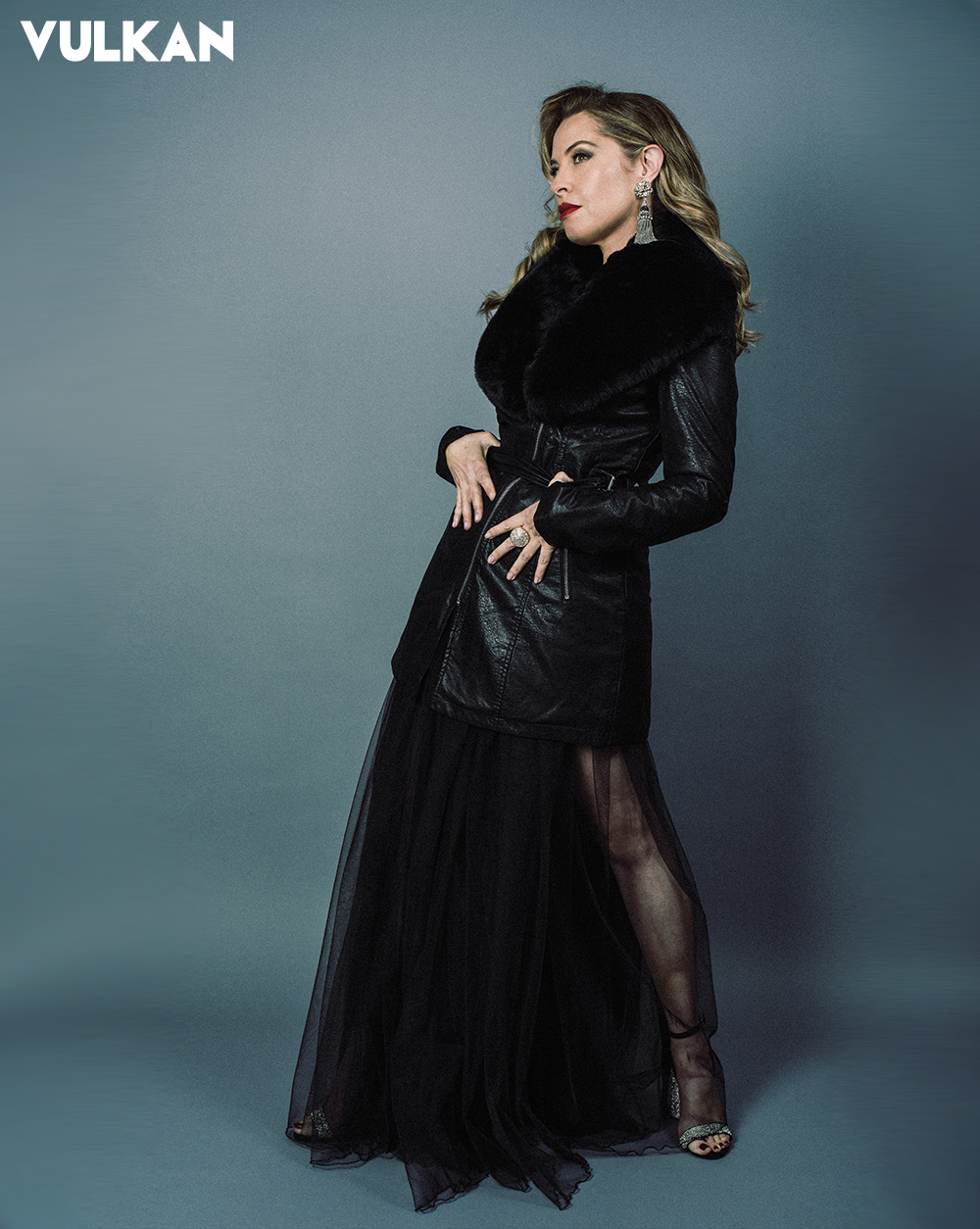 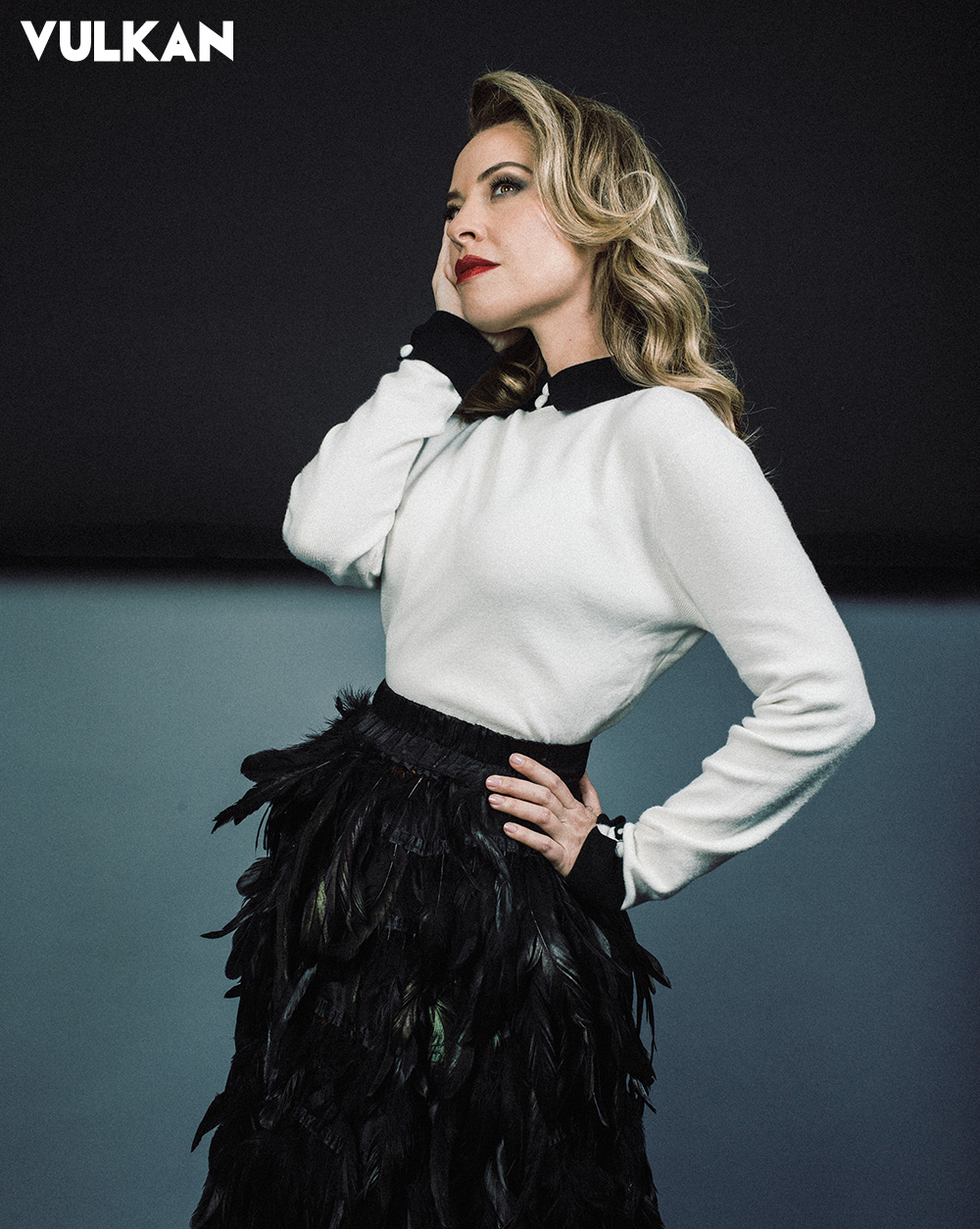 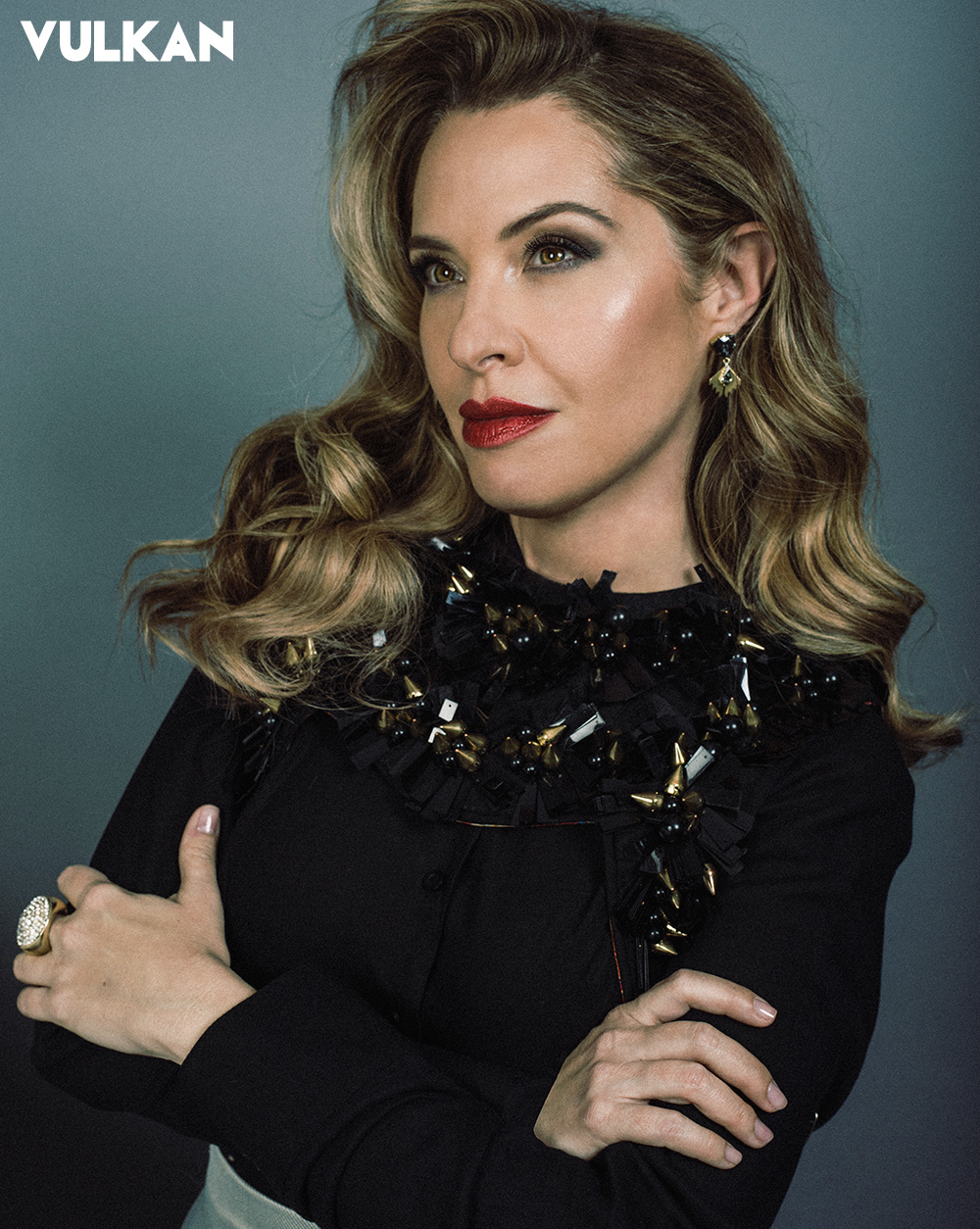 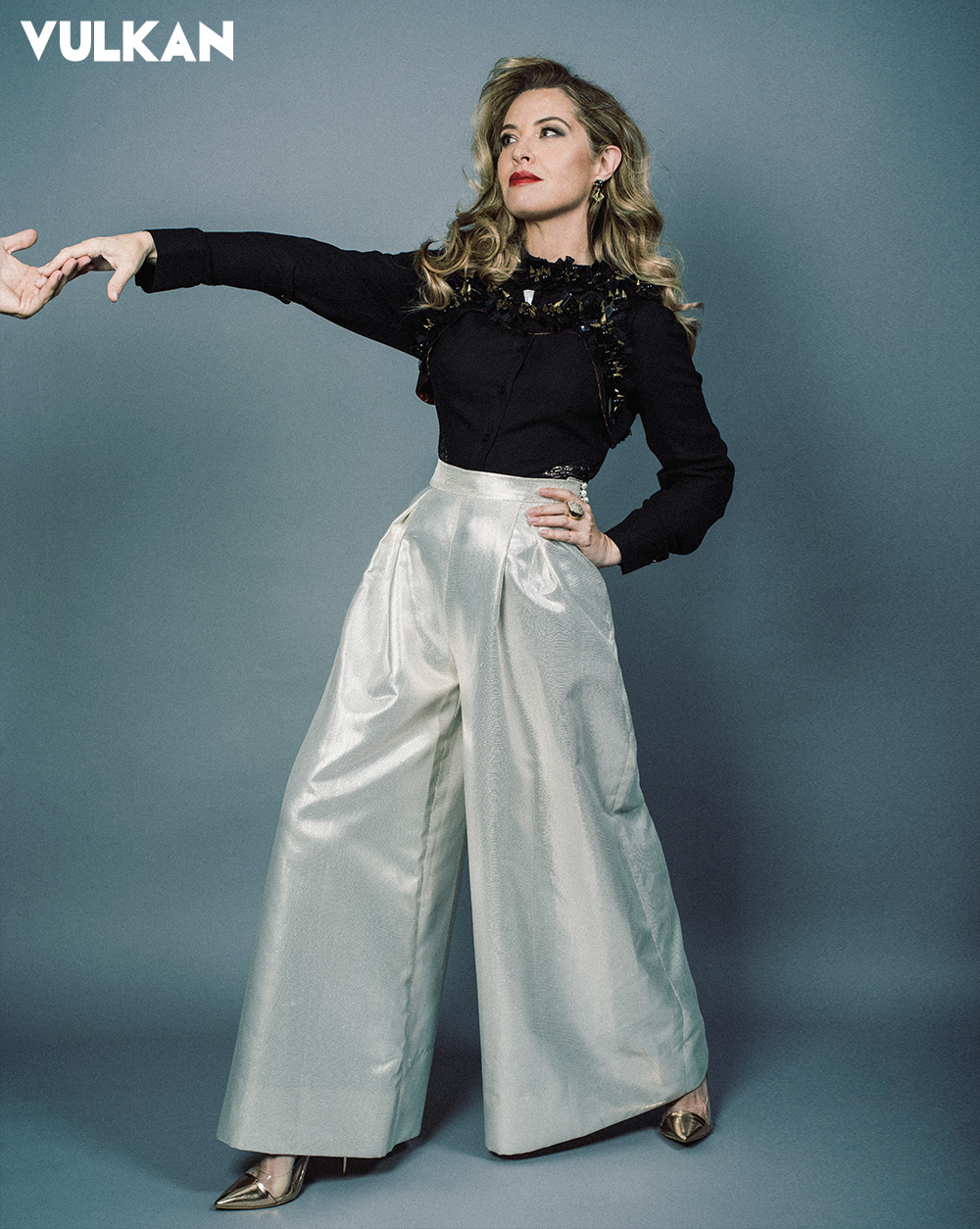 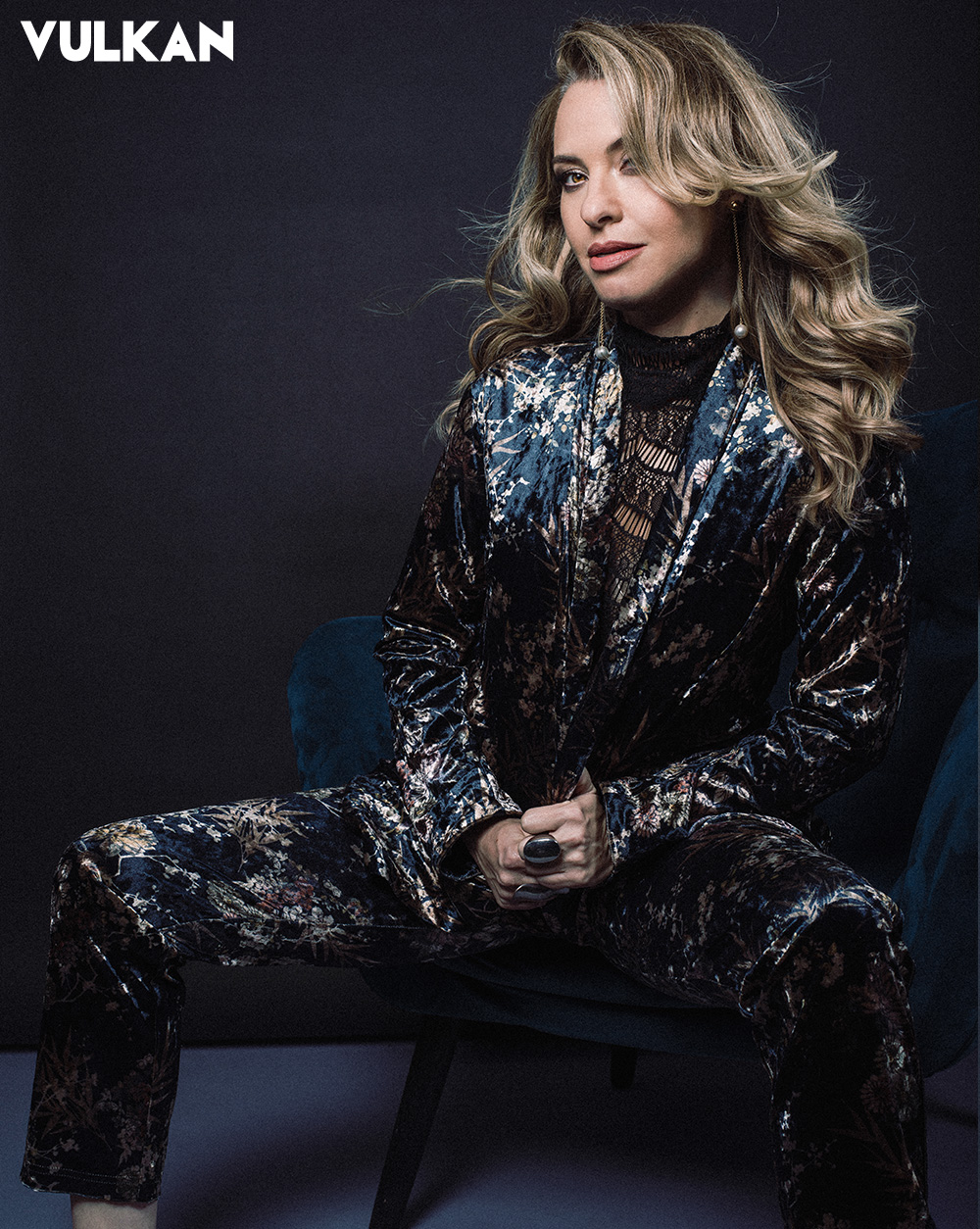 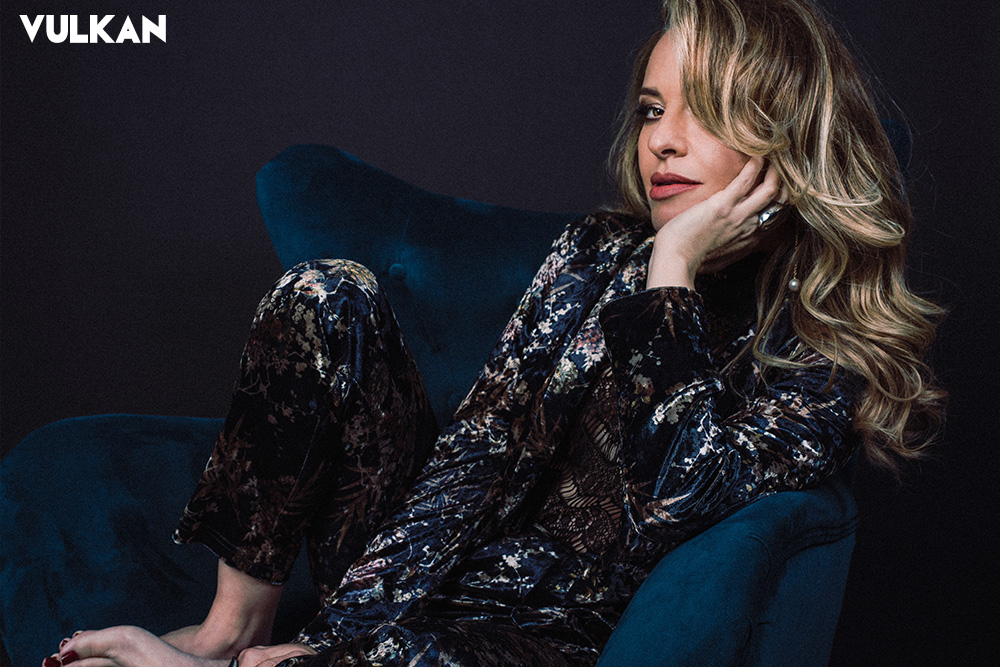 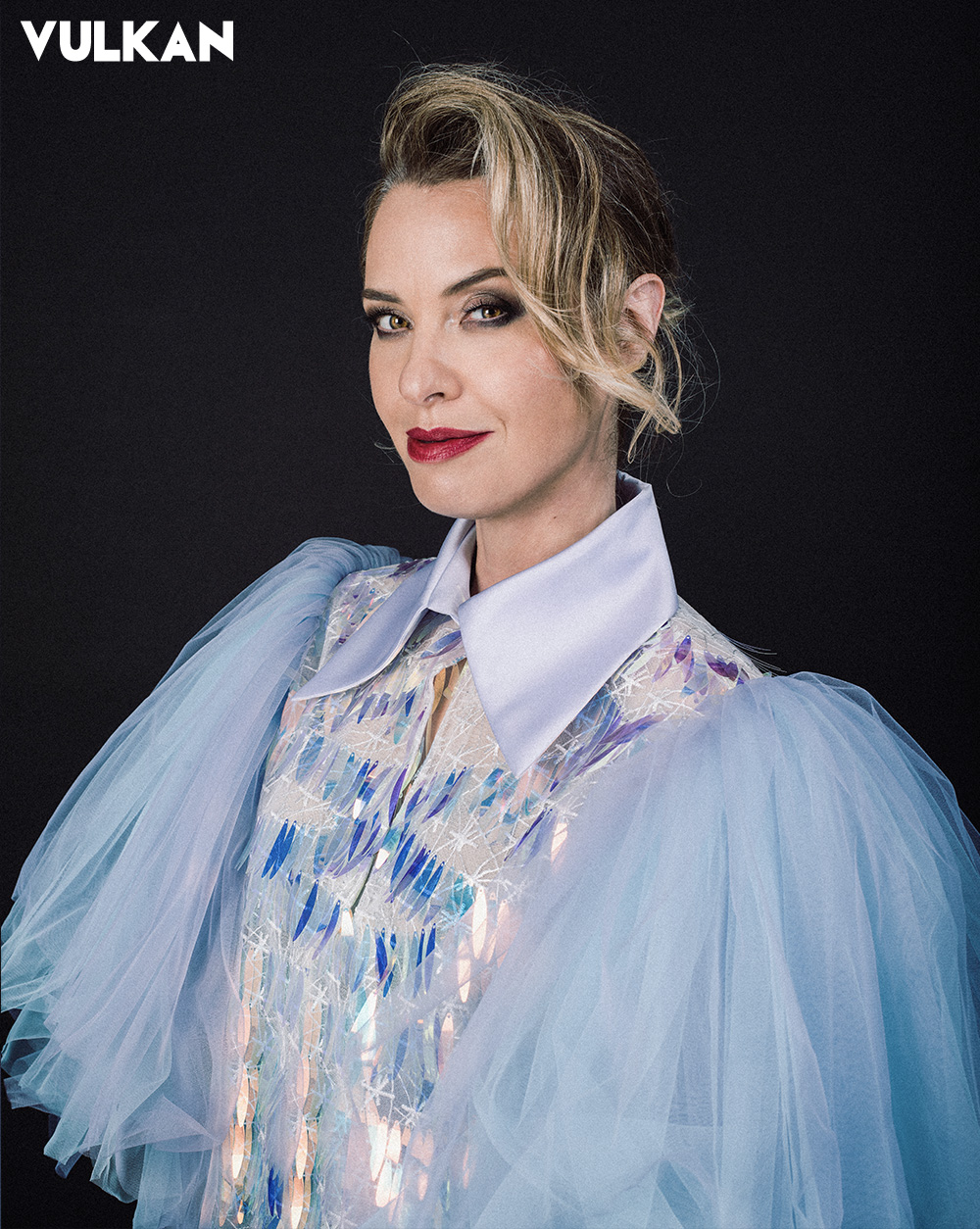 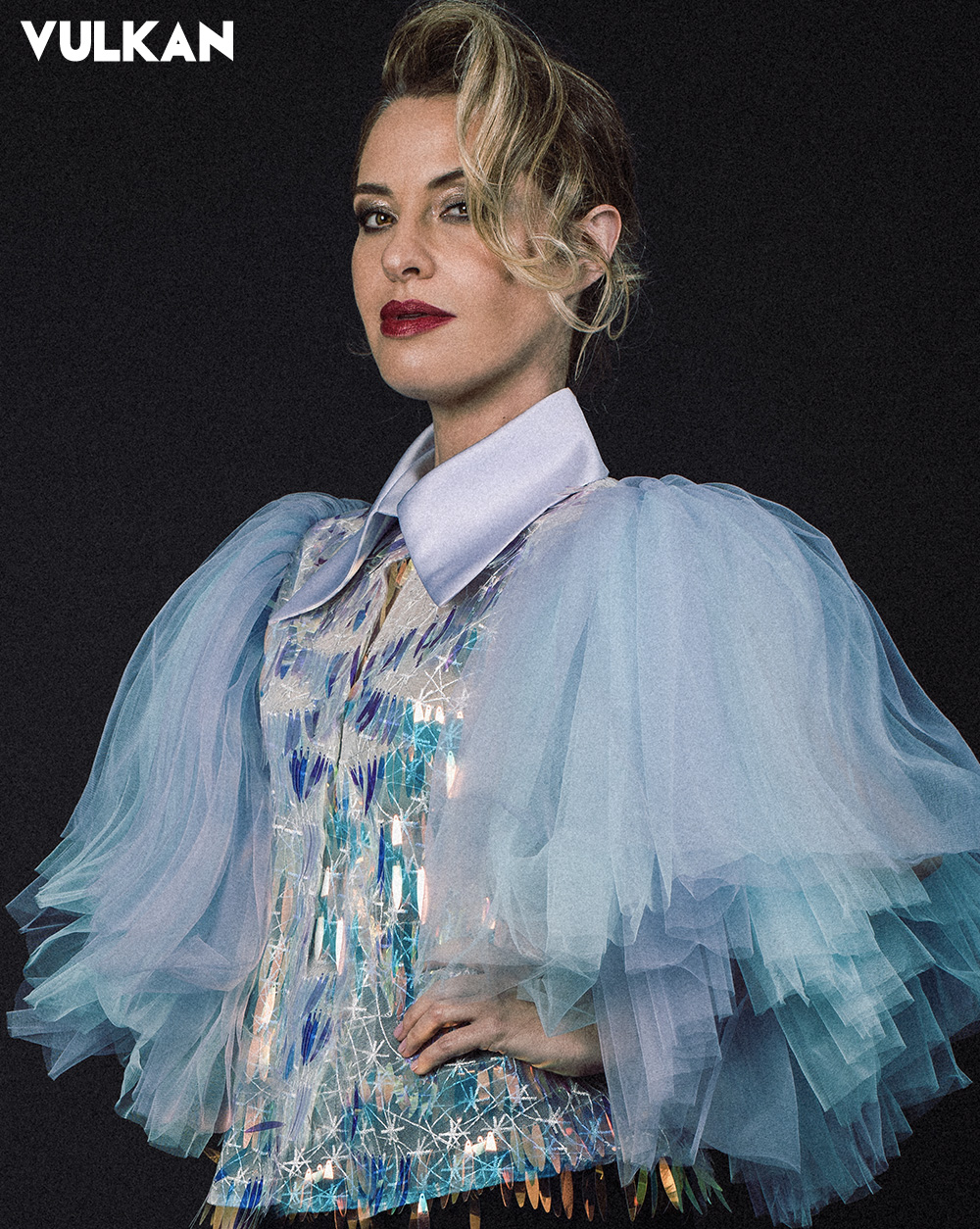 You will never believe who I got to meet AND interview….LESLIE GROSSMAN! I am still trying to process the whole thing. It was like talking to my best friend over drinks after work on a Thursday night. We talked about her career, her family, who she is as a person and what life is like through her eyes and in her thoughts. It would be a crime not to write this down. I have to mark this moment in time, so here it goes.

Being an actress is a tough job but if anyone can wear that title correctly, it’s Leslie. I mean come on, have you seen her in front of the camera? Currently starring on the new season of ‘American Horror Story,’ Grossman is excited to be back on set of the infamous series: “every year the cast is so incredible and we always have such a great time together and I feel like that chemistry translates onto the screen,” she shared happily. She plays the character of ‘Margaret Booth’ who owns the camp and who reopens it after having survived a massacre–she wants to cleanse it…Spooky!! I don’t know if I would go to such a camp but then again I guess that’s what makes it all the more exciting. Something to think about.

Obviously she could not give away any spoilers (Darn!) but it was clear that Grossman really enjoyed playing this role and is passionate about it. As she exclaimed excitedly, “she is totally bananas, very extreme and it’s really really fun to play people that are so different from yourself. She is very strange and it’s a lot of fun playing that strangeness; maybe the most fun I’ve had on a job.” This is like no other role she has ever played in the past but that is what makes it all the more exciting! It was so great hearing the excitement in her voice.

So I then decided to do a 360 turn on the topics and asked her about what the cast and her do off-set: totally not what I expected. She tried to come up with a fun and crazy answer and she just shared how they usually have dinner, enjoy each others’ company and above all….SLEEP! Mhmm, still a little skeptical but I guess it would make sene? After all, they do work pretty crazy hours which makes it hard to find the time and energy for other things but they make it work. I definitely can relate to that: high heels and partying or sweats and Netflix? Ummm, the second option, DUH!

Now this was really moving to hear about. Choosing to be an actress has not been an easy path and she opened up about it: “I have had to fight for my jobs. It has not been an easy road and I made the decision of not giving up. I would say that pursuing this career has been the ultimate test for me.” Her perseverance is eye-opening and inspiring as it reminds us that if we set our mind to something, we can make it happen. Thankfully she has been blessed to work with so many talented people, one of them being the creator of AHS, Ryan Murphy. I mean yeah he is the creator but above all one of her oldest and most dearest friends.

Can you magine getting to go to work every day with one of your oldest friends? What an amazing chance! I had chills running down my body as she spoke of her relationship with Ryan and how they are like family. I feel like we can all relate to that in some way–most of my family is chosen family. As she explains laughingly, “I always say Ryan is my fairy godfather.” Murphy has provided Grossman with this incredible opportunity, prompting her to make him as proud as possible. He is a man who creates creative and unique roles for actresses who have been in the industry longer than most which is a rare thing. She spoke very highly of him as she emphasized on his creative genius and how working with him has been the highlight of her career.

When I asked her about how her relationship with Murphy has evolved, I could picture her smile growing wide. He is someone who continuously surprises her and she has much admiration for him and his work. The only thing that has really changed is the new title he took on: father. As she shares, “What’s different is that Ryan is now a husband and a father and is incredible in being both of those things. It’s really fun to see people you have known for a long time take on new roles so beautifully.” Being a wife and mother herself, Grossman knows what it takes to balance those different roles.

But what about something completely crazy? Like, what if in five years she had a completely different identity? Her answer had me going awwwww: she would want her identity to be her child’s “mother but then I would probably want to also be an international spy.” I mean, after all, mothers are spies in their own way so it would make sense. Oh boy did we share a good laugh on that idea. Wearing the “mom” cap is important to Grossman. Family is everything to her and as she described a perfect day it became more and more apparent. It would be a day filled with sleep, taking her daughter to horseback riding classes with her husband, family time, a fun dinner with her friends and back to sleep: “I am a dork who really likes family, very close to them.” Being surrounded by those she loves the most and who love her unconditionally is where she feels the most comfortable and at home: “I would say what makes me really happy are the meaningful relationships in my life; we have our best interests at heart. All material things are meaningless if you don’t have people in your life you love and are connected to.” Her heart is warm and filled with love for those close to her just as it beats for her career as an actress.

Having played a variety of roles, it was interesting to get a better understanding on how she adapts to them and try to see what it is like being an actress. Let’s be honest, acting is not an easy task. I mean I can act like a goofball but beyond that, ouf! Grossman gives most of the credit to the writing that is done from the script of ‘The Good Place’ to ‘The Goldenbergs’ and more. Truly a breath of fresh air how honest and humble she was. As she said: “I just show up and say the words that were written for me because it’s all there on the page. I am very lucky that I just don’t want to screw up the works they have done. I hope I can interpret the character they want.” If you haven’t had a chance to watch her on screen let me just tell you: she not only accomplishes her goal, she exceeds in it.

During her hiatus from ‘American Horror Story,” she worked on a show ‘Goliath’ which is now available for streaming on Amazon. Just like all the sets she has had the pleasure of working on, the cast was absolutely amazing and the writing so good. The work of the writers is what allows Grossman to be at the top of her game but let’s give her the credit she won’t give herself: she is a talented actress and it shows. But what about off screen? I wanted to know what was something about her that represents the “real” Leslie and her answer hit home: “I would say overthinking everything. Taking something and turning it over in my mind until I drive myself crazy, that would be classic Leslie.”

And in that moment, I could not contain my laughter as I understood her completely! We both agree that we are big over thinkers who will think something to death. To the point where we need someone to tell us to stop! It’s like we overthink that we are overthinking which just leads to more overthinking. A curse, an endless cycle that is difficult to end. Besides her uncontrollable passion for overthinking, Grossman is also very vocal about what she believes is a crucial necessity for our world: informed voters.

In our country today, she believes that democracy is being tested and it is important that people exercise their liberties and vote. With global warming being a real problem, for example, she looks years into the future at how there may not be one for our children and grandchildren: “People say the earth won’t continue but no the earth will still be here but people may not.” In order to make change, officials elected must be people who believe in science and want to make sure there will be a future. Grossman plead passionately: “What I would say to Americans is please, please, please be involved in the political process.”

Well, there it is. Whenever you are feeling down make sure to pick this article up as a reminder of a very happy day. Leslie Grossman is passionate, caring, and talented which reflects on screen and in her everyday life. Vocal about her stand on politics and other matters, she brings a voice to those around and lights up every room she walks in. We are all excited to continue following her adventures on ‘American Horror Story’ and future projects, as she continues to shine. When in doubt, think like Leslie, Alex and you’ll be okay.