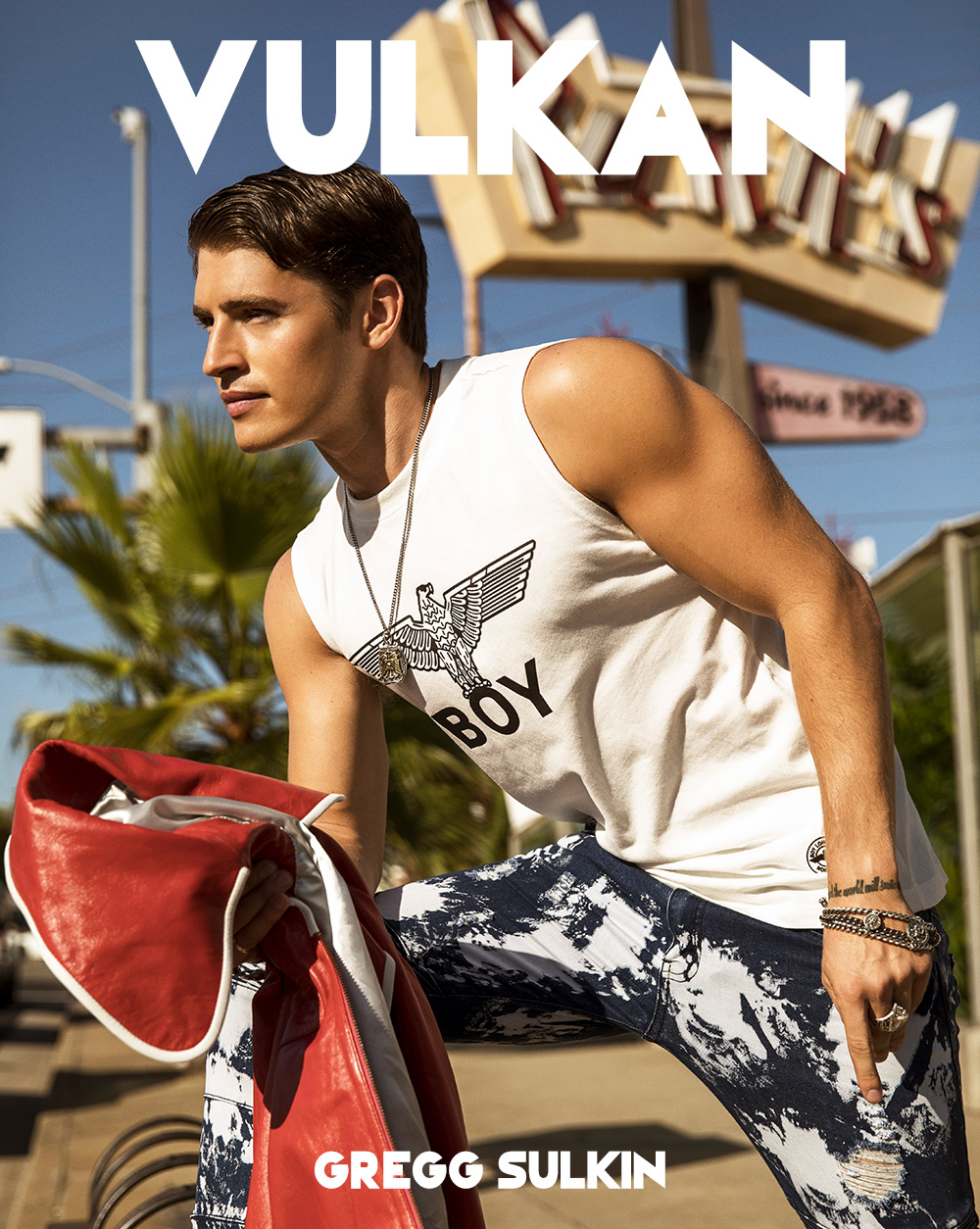 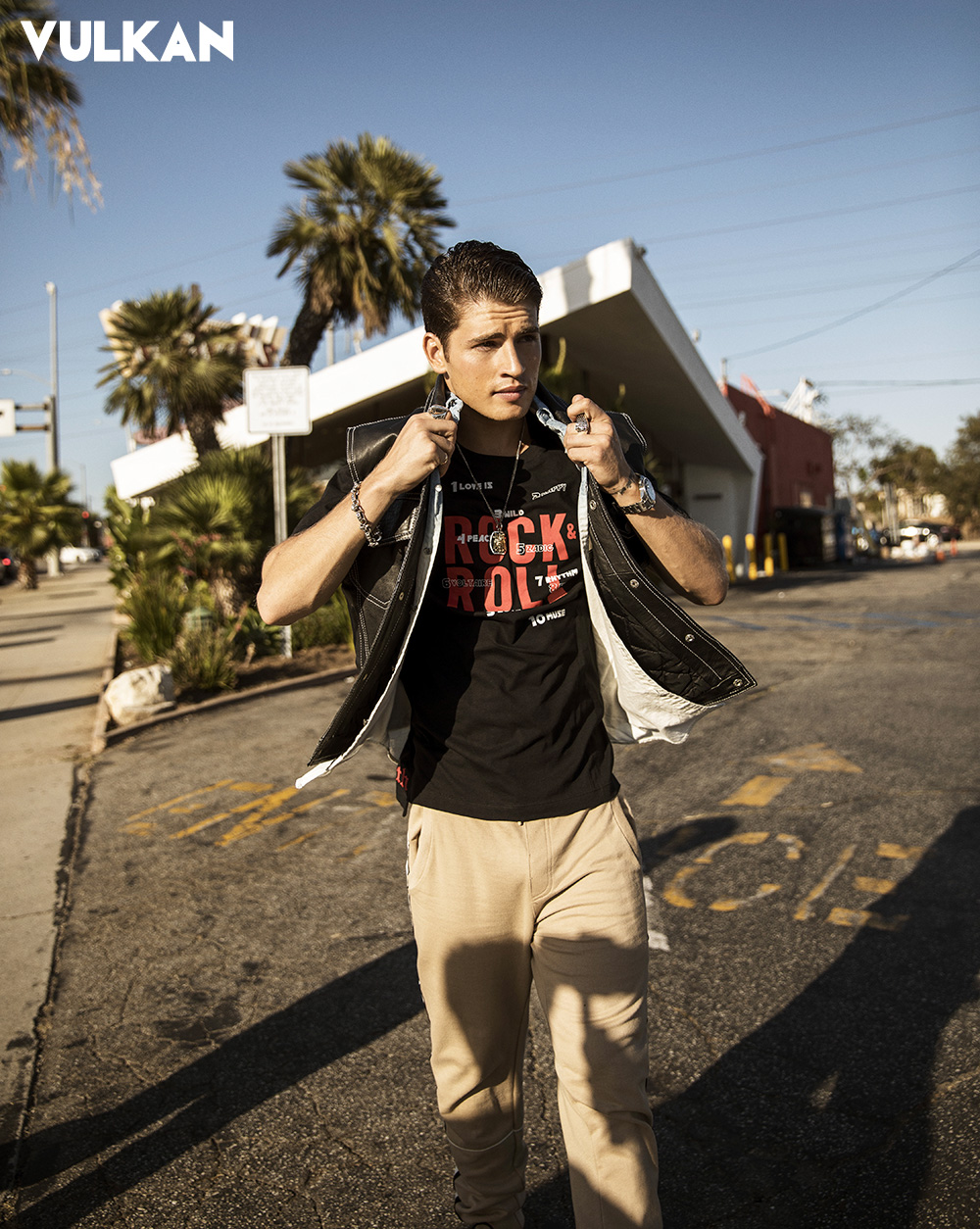 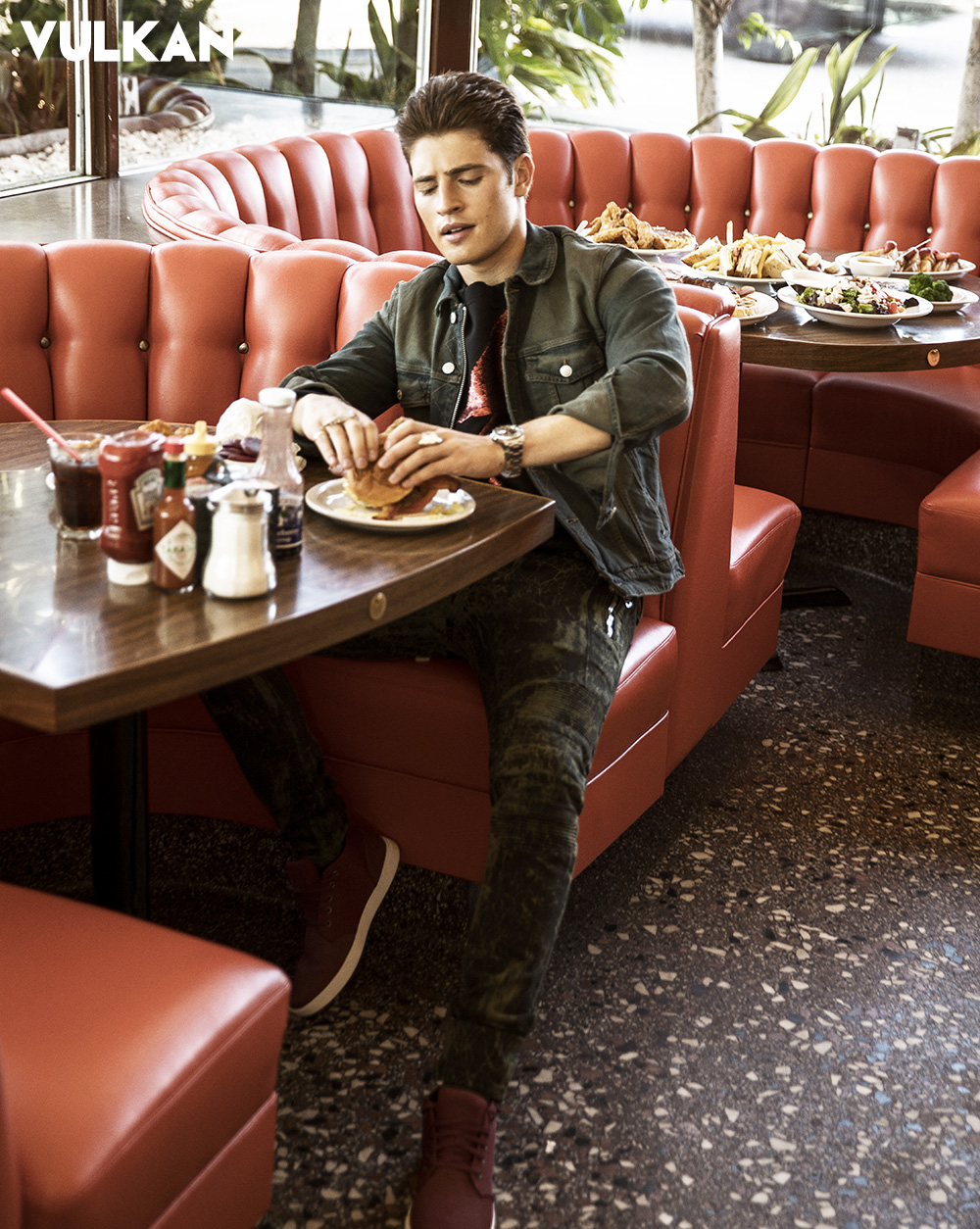 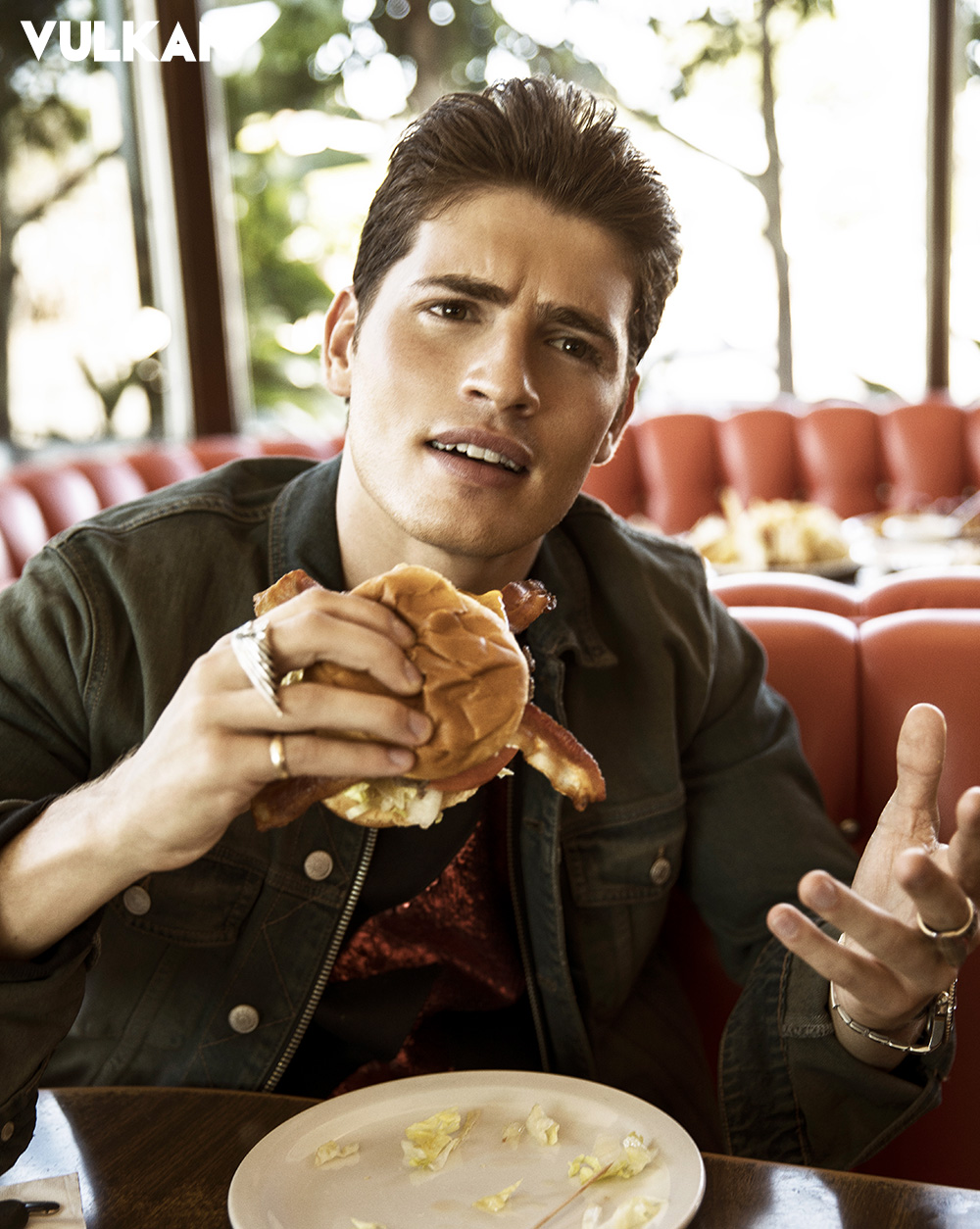 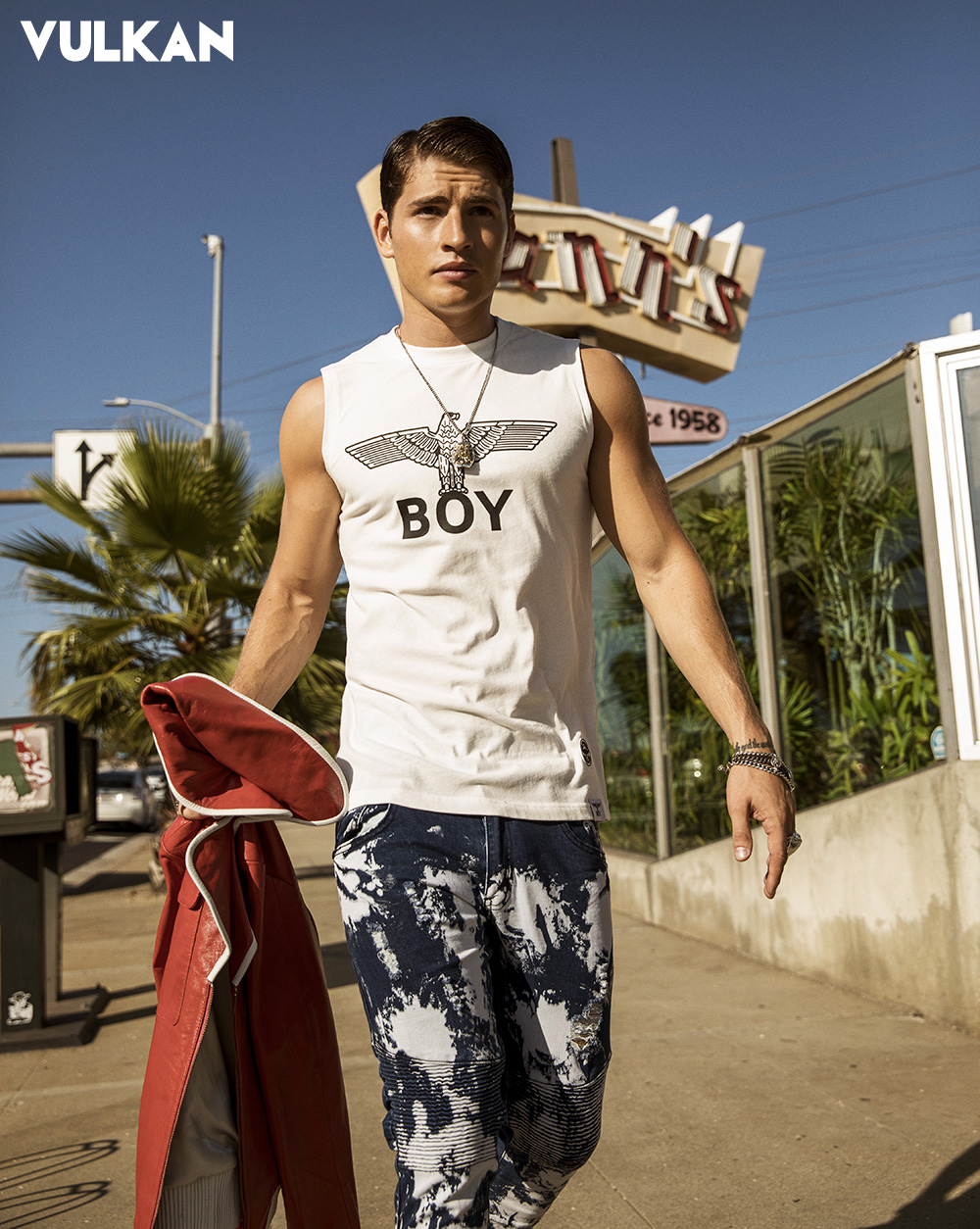 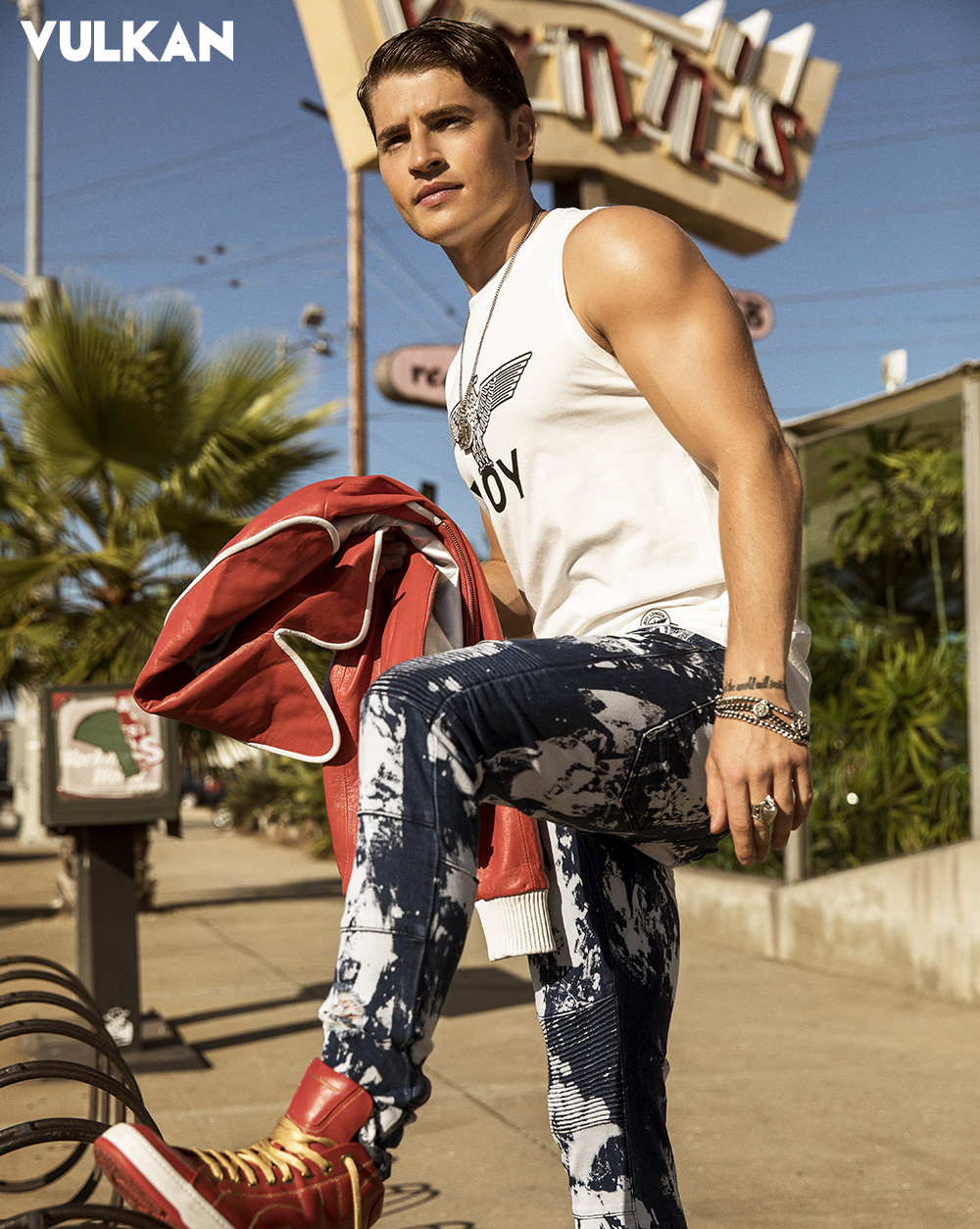 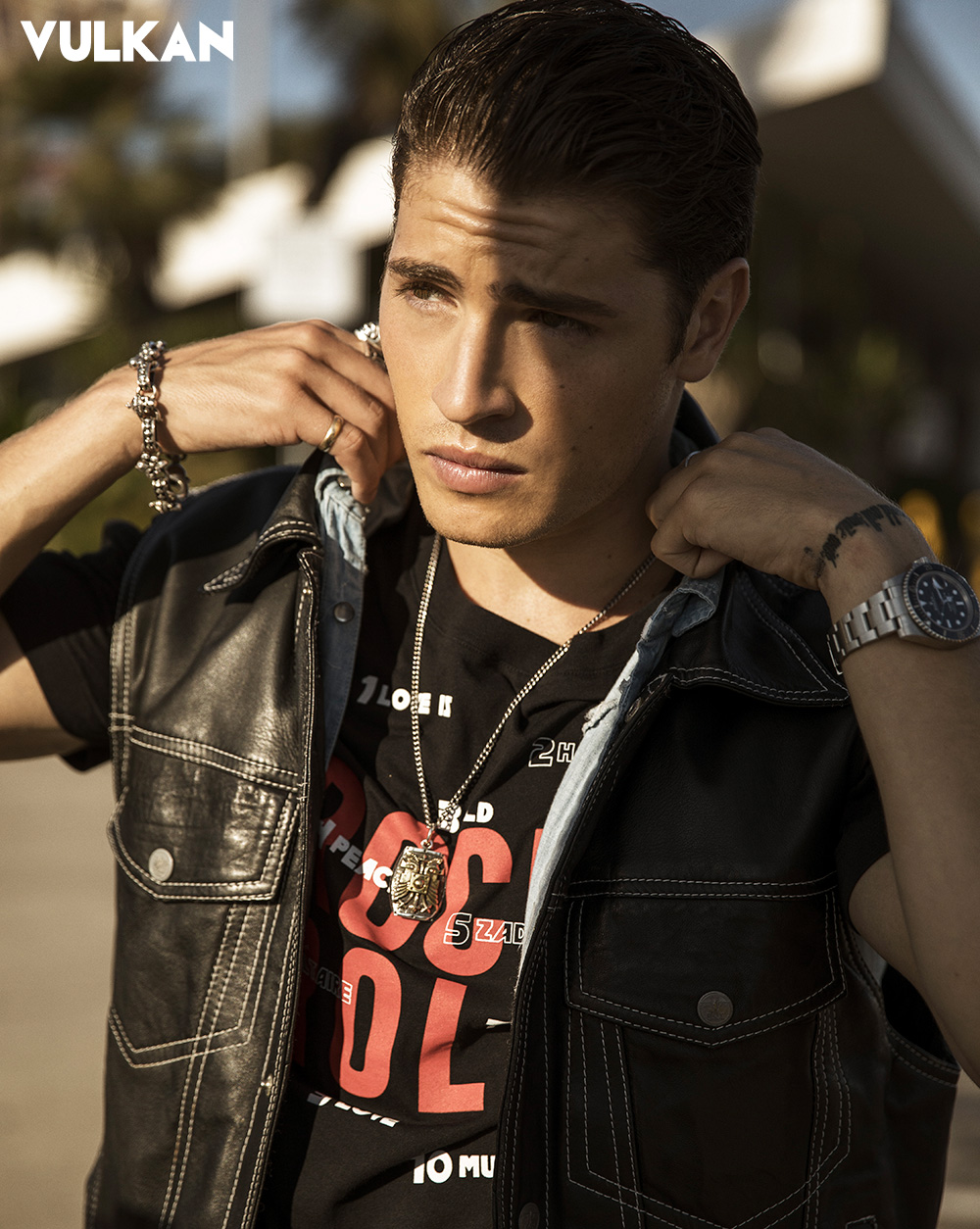 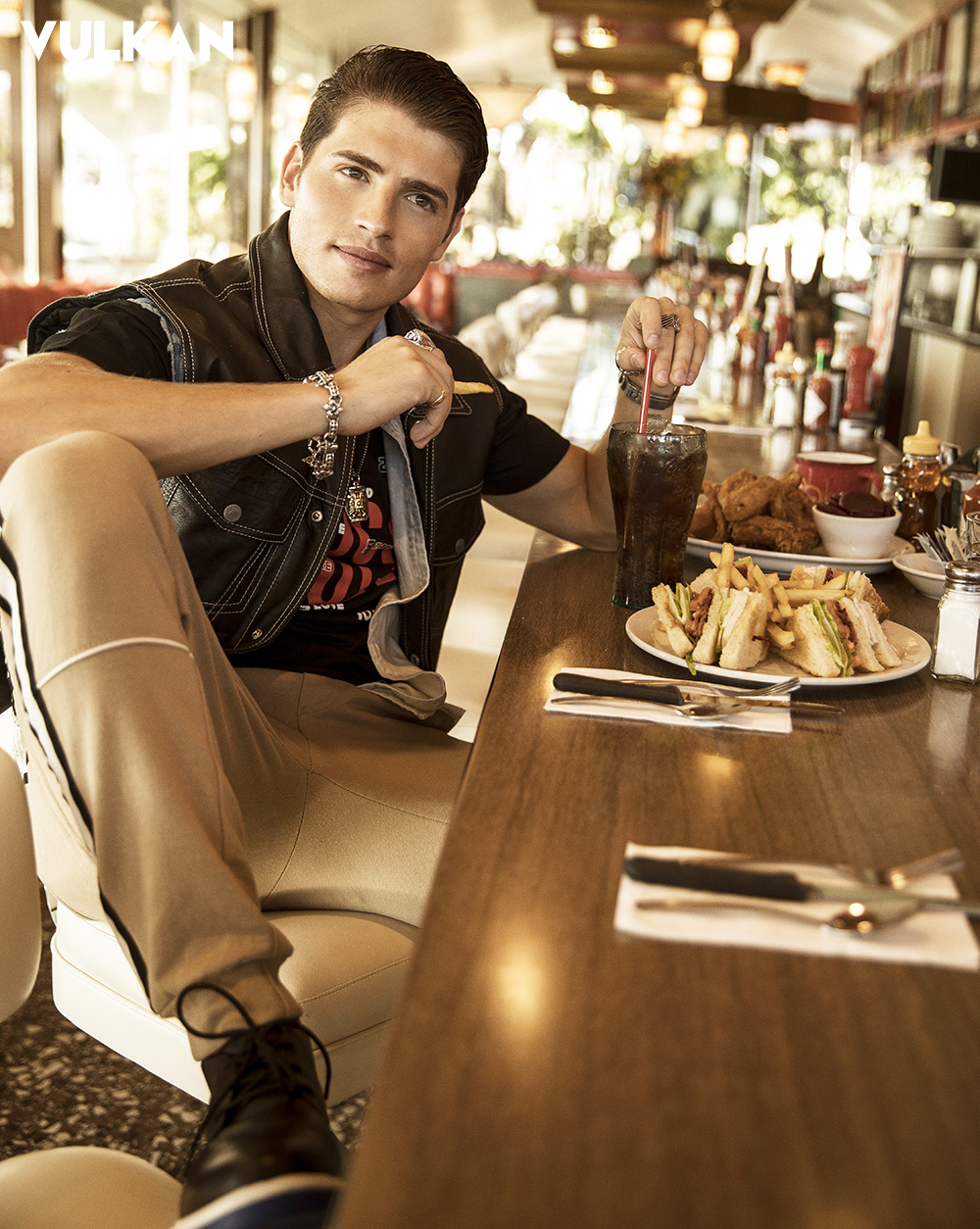 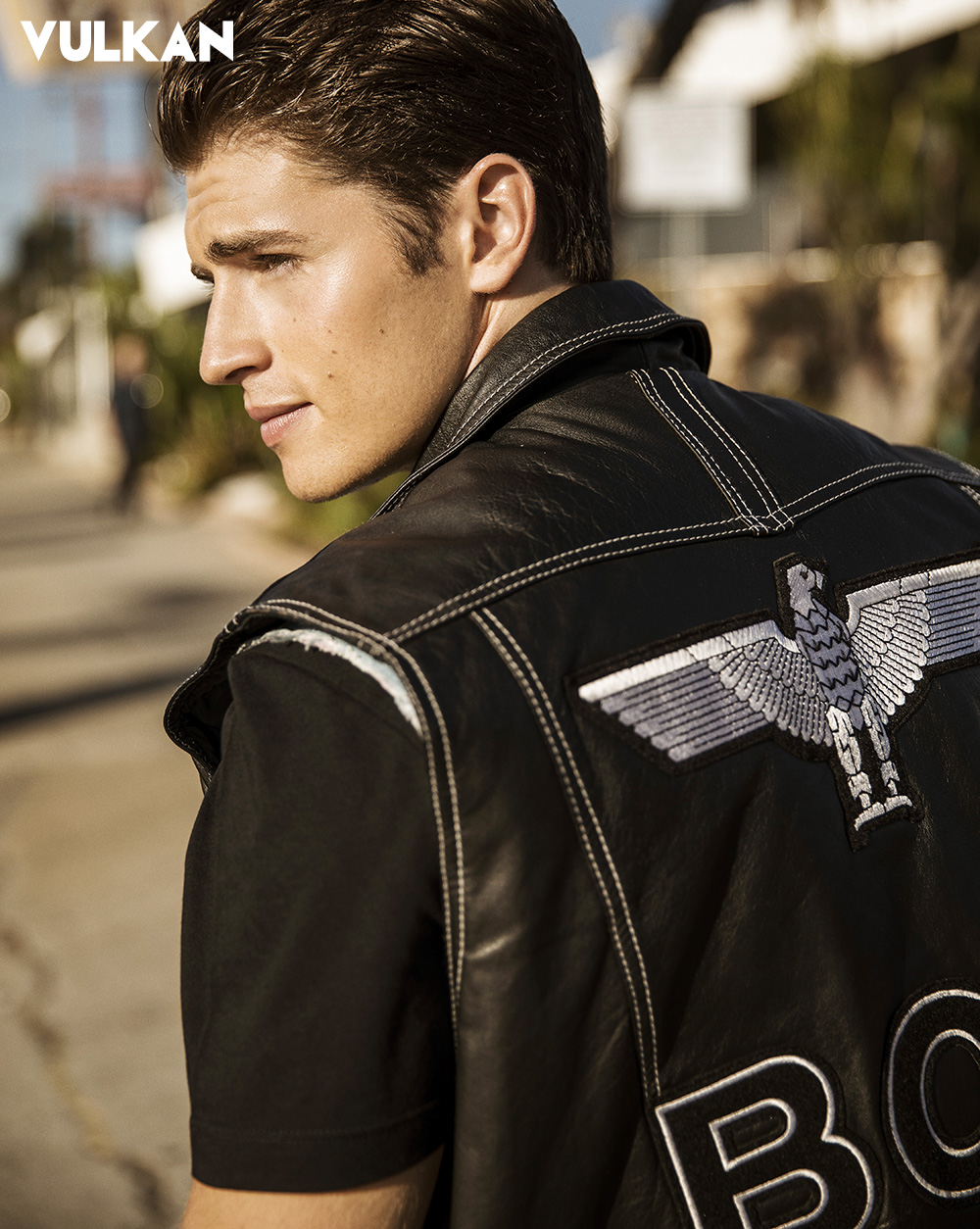 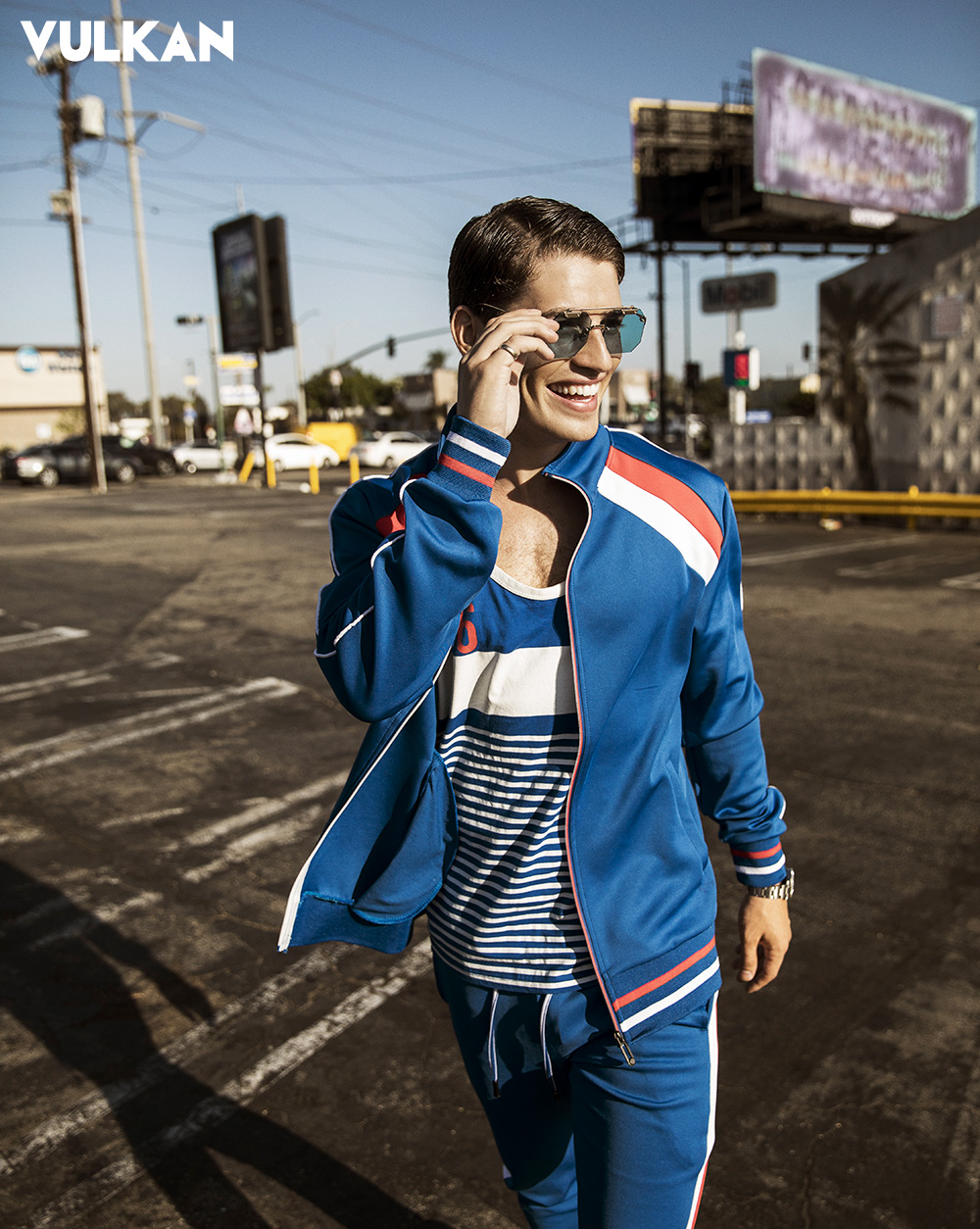 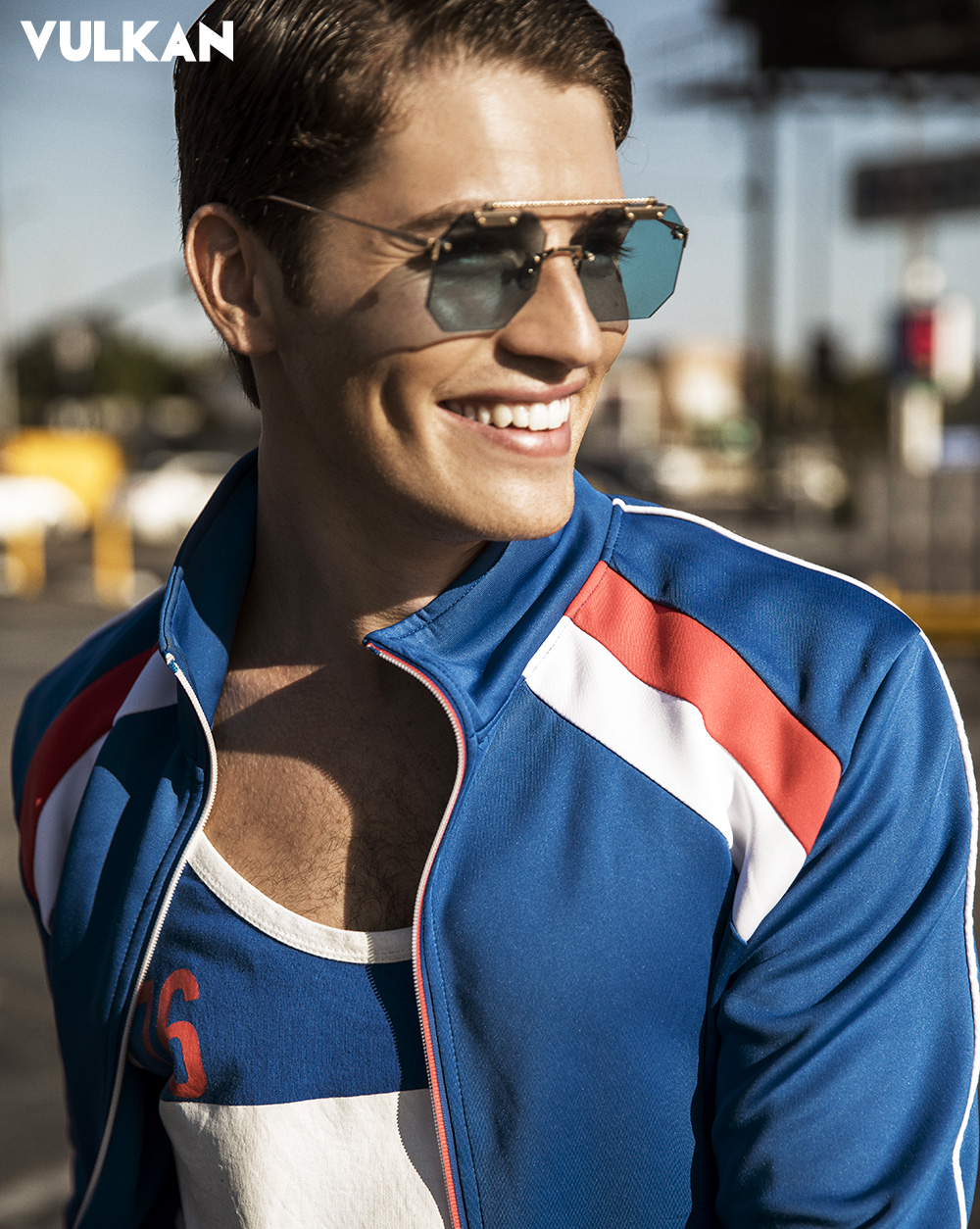 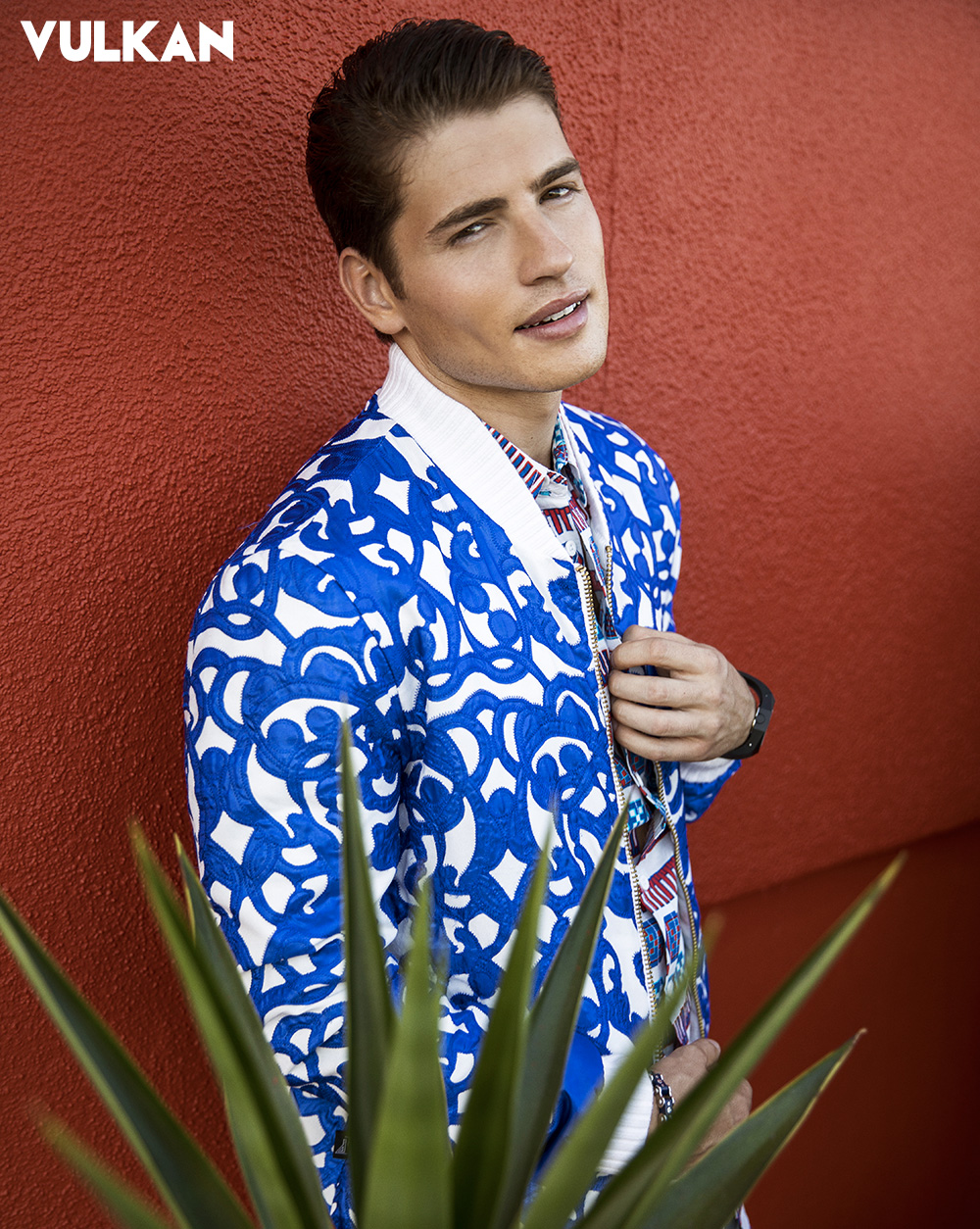 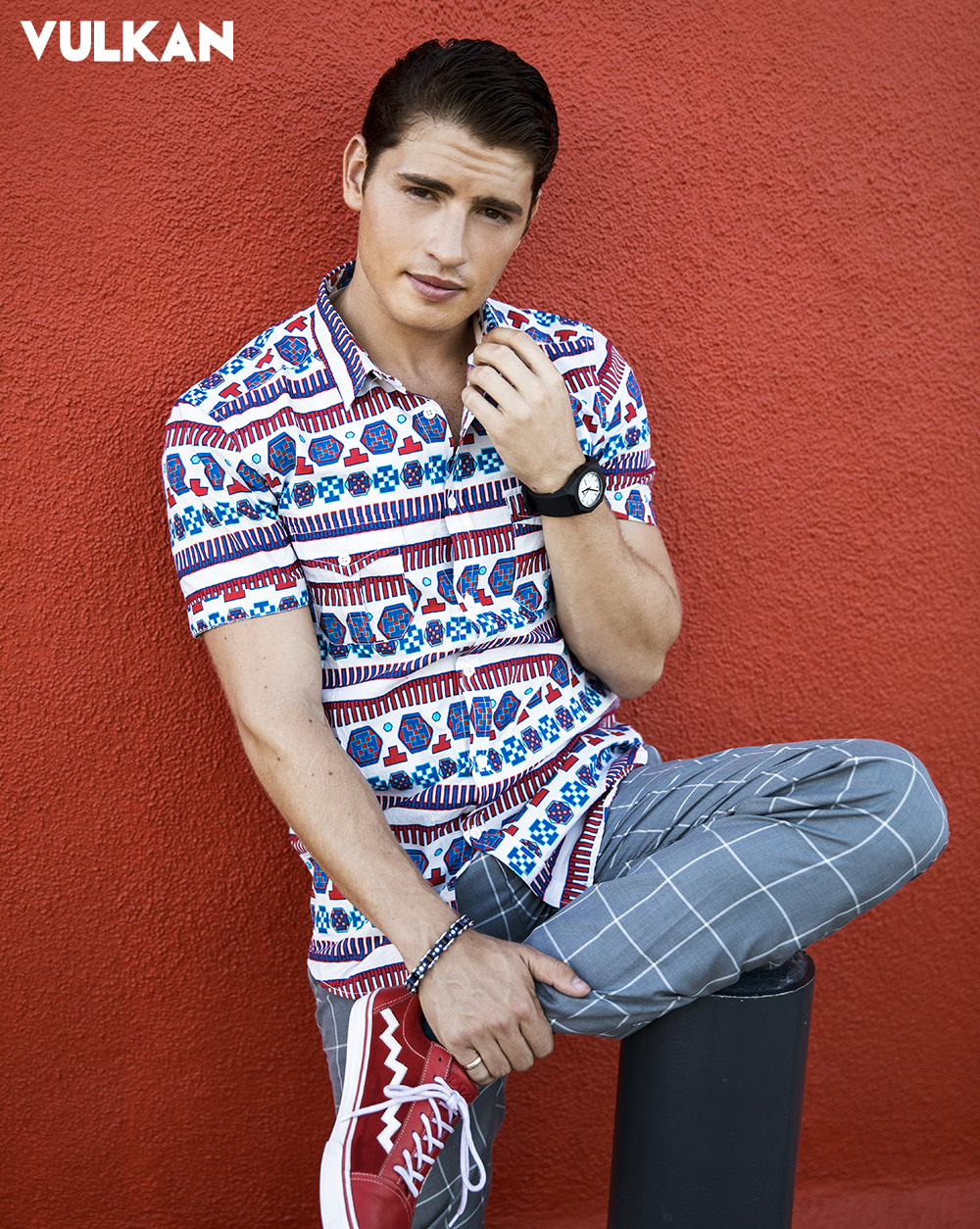 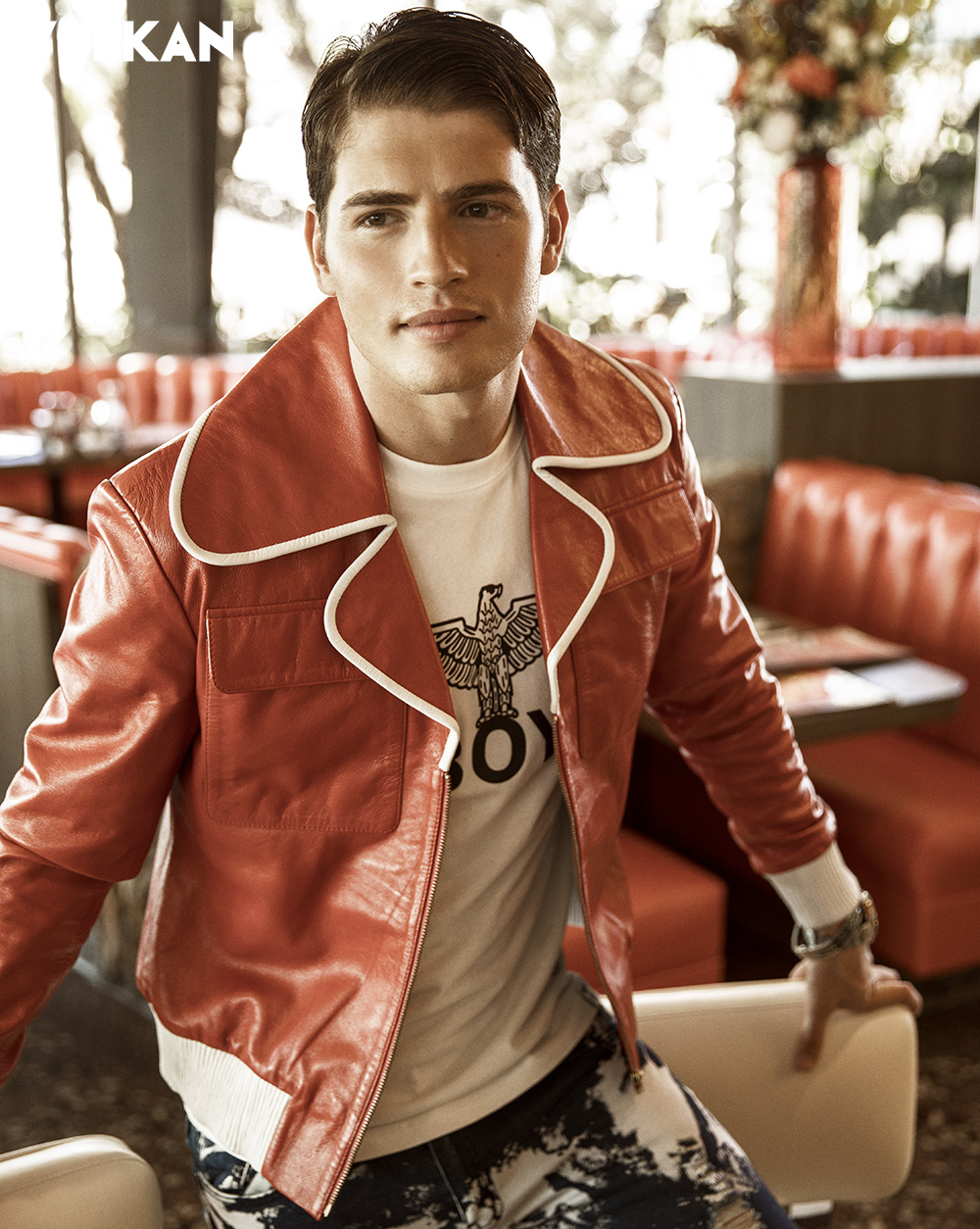 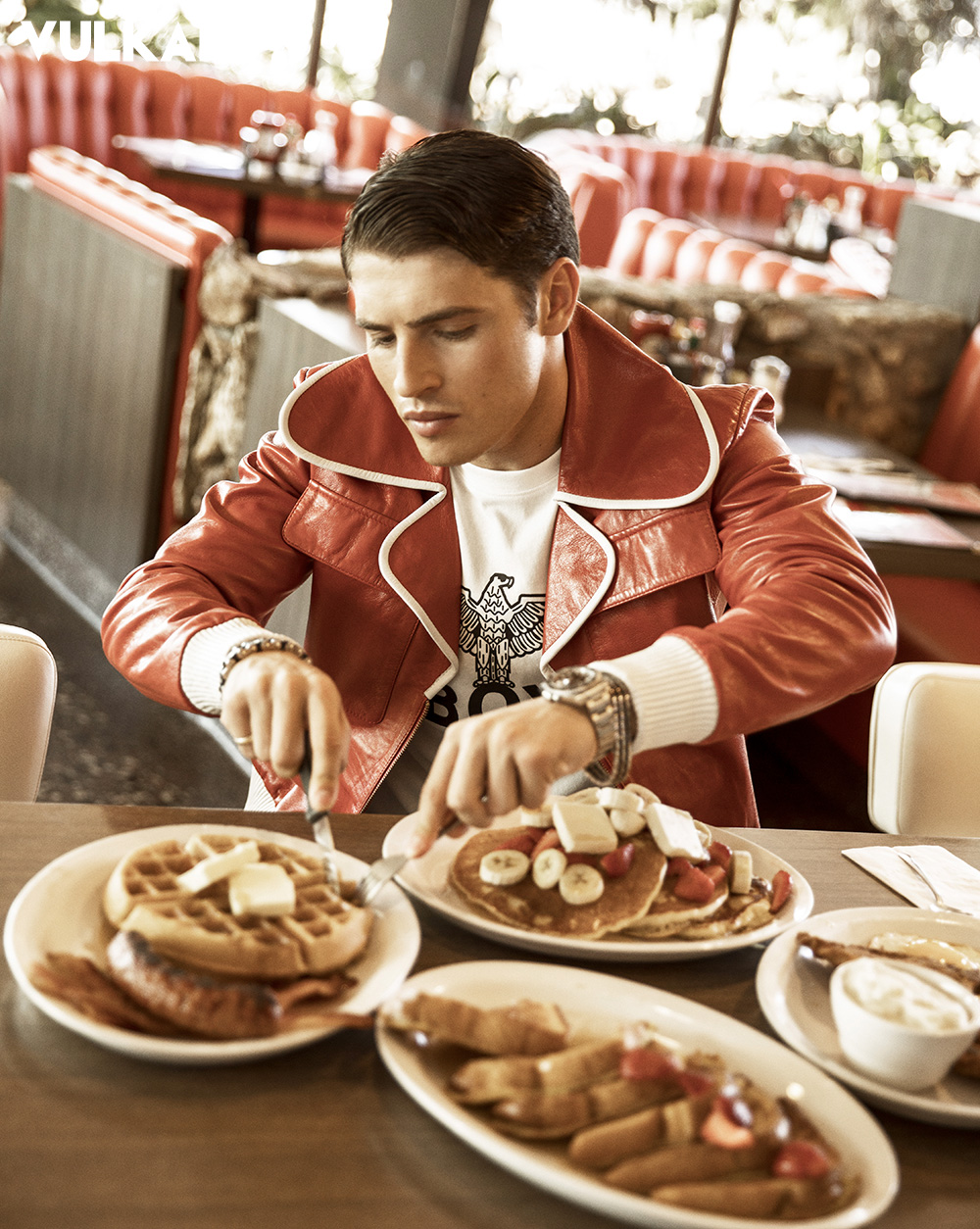 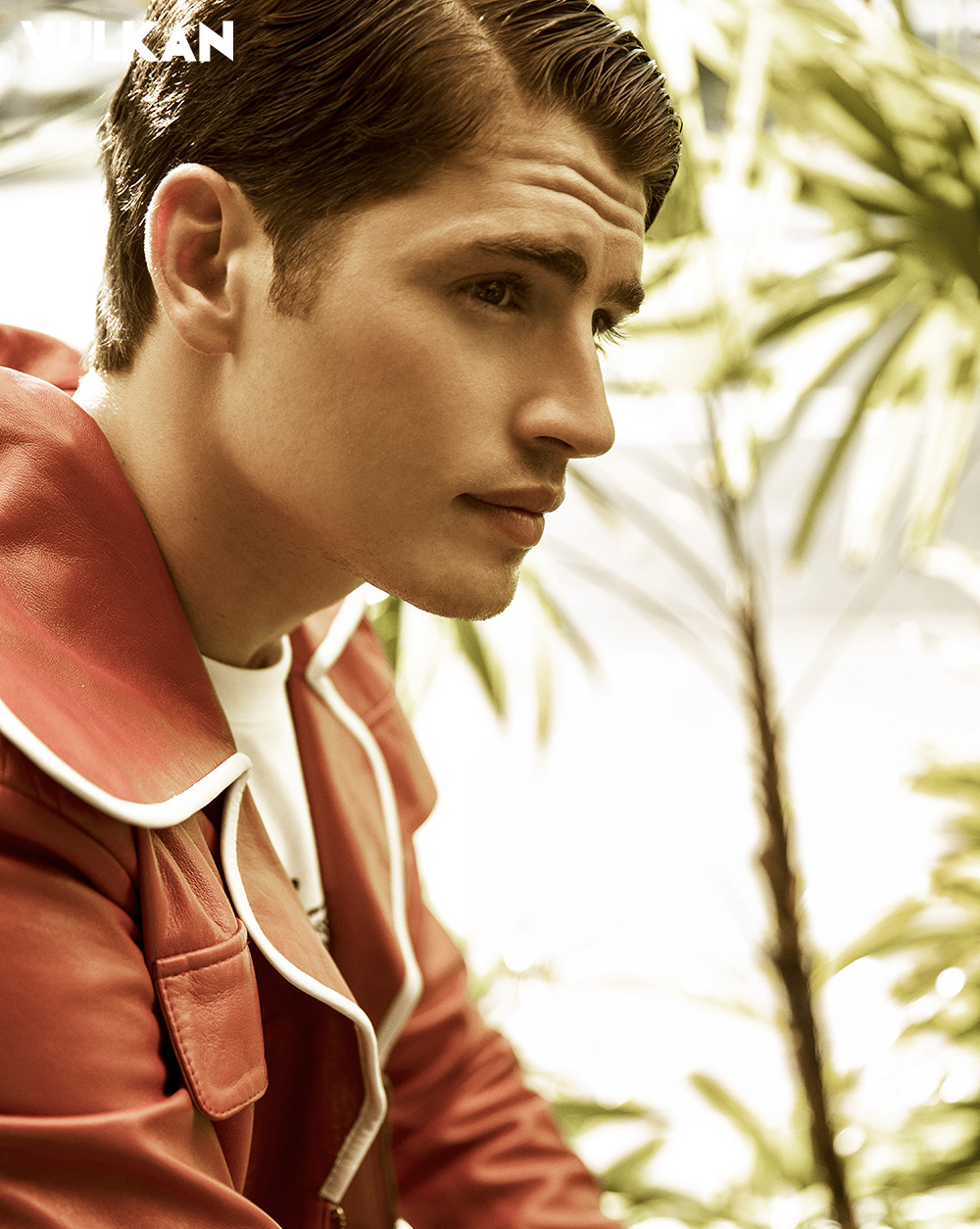 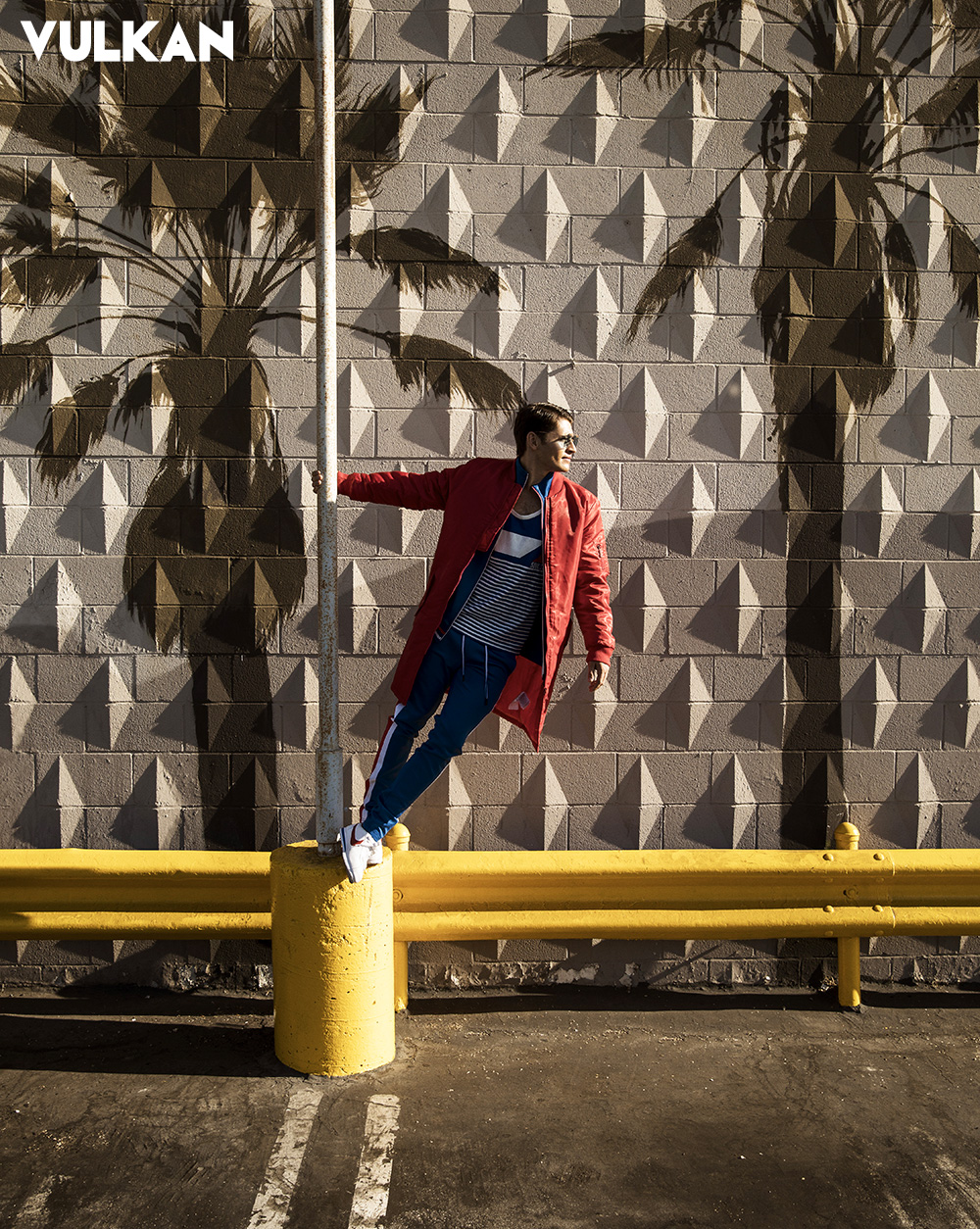 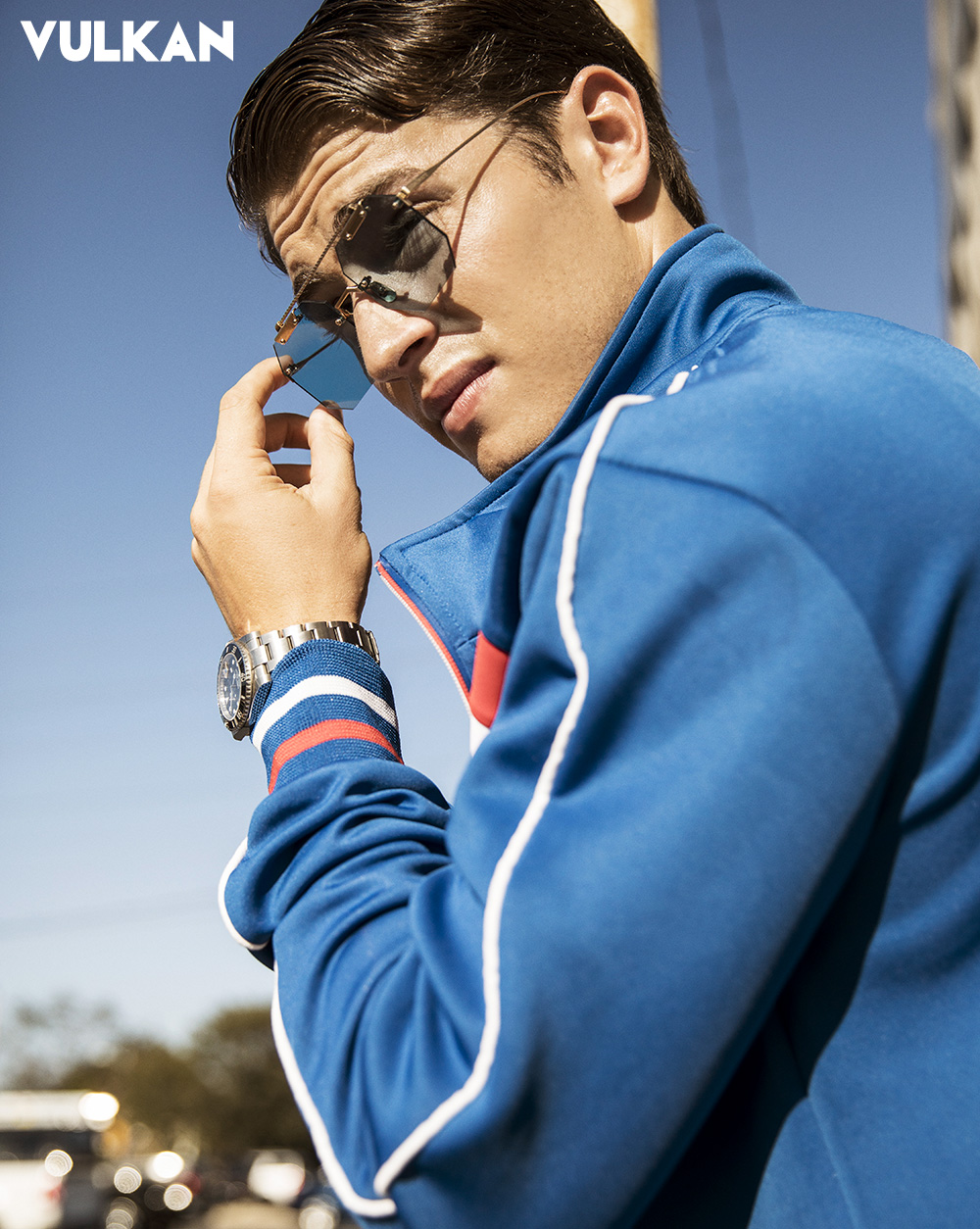 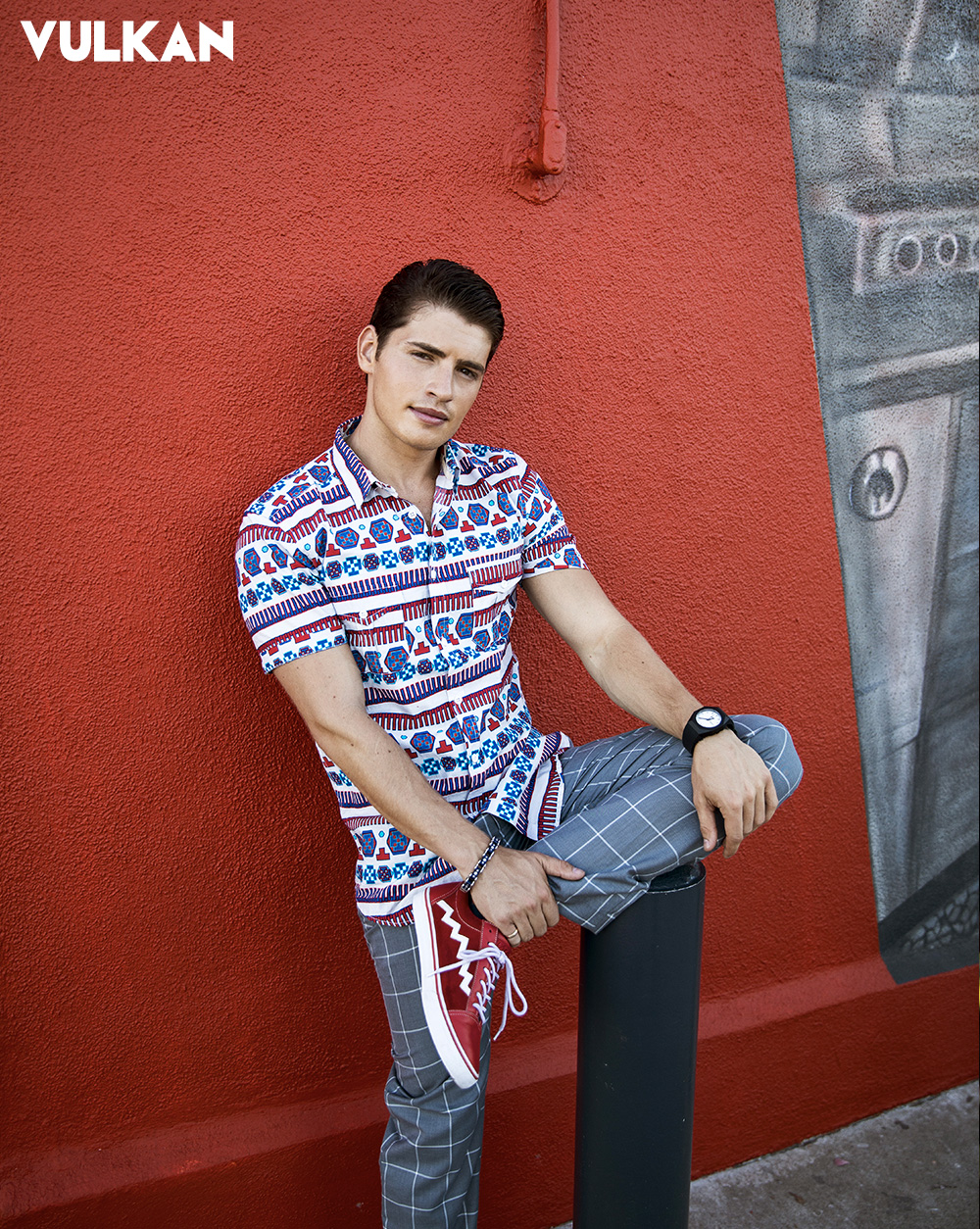 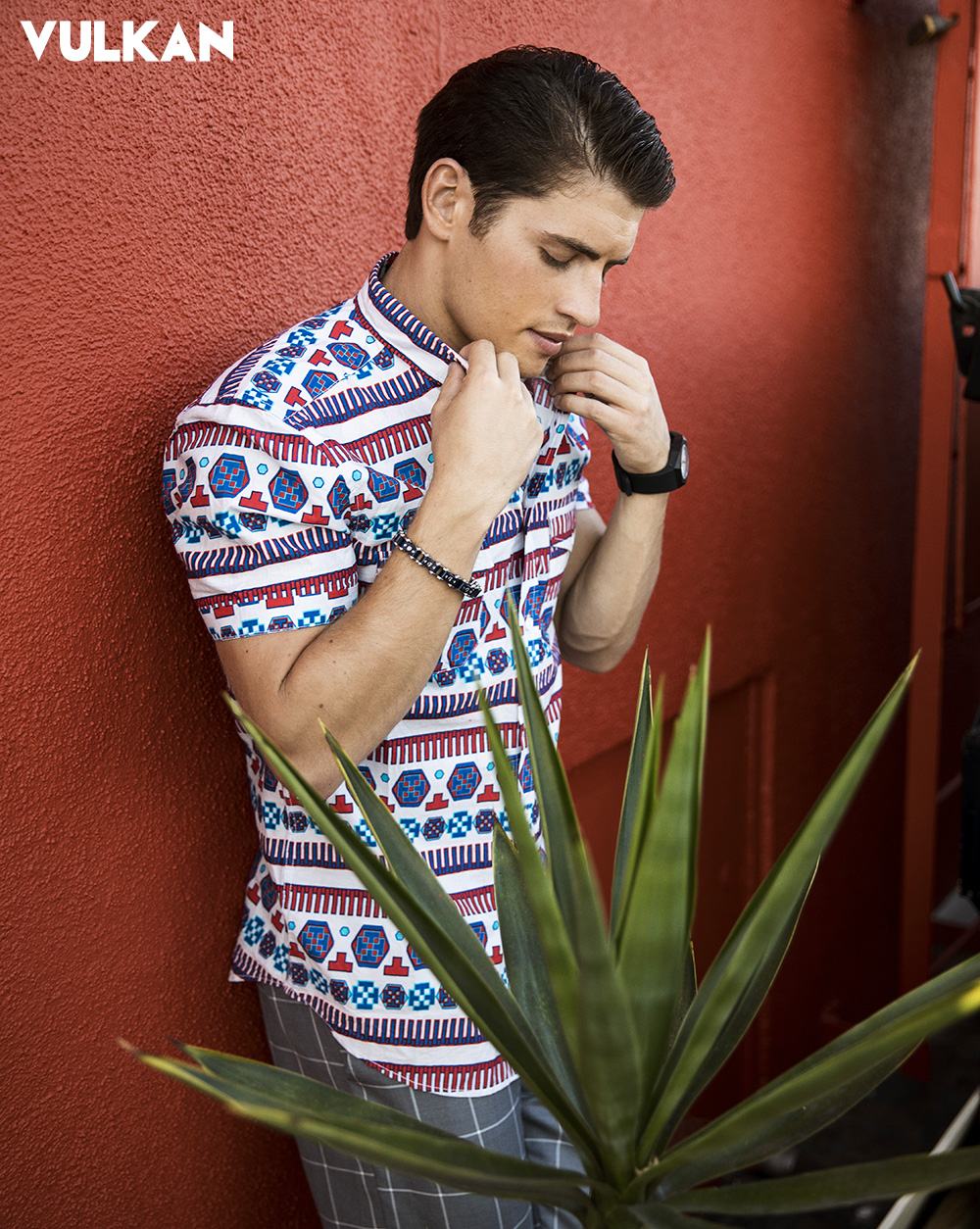 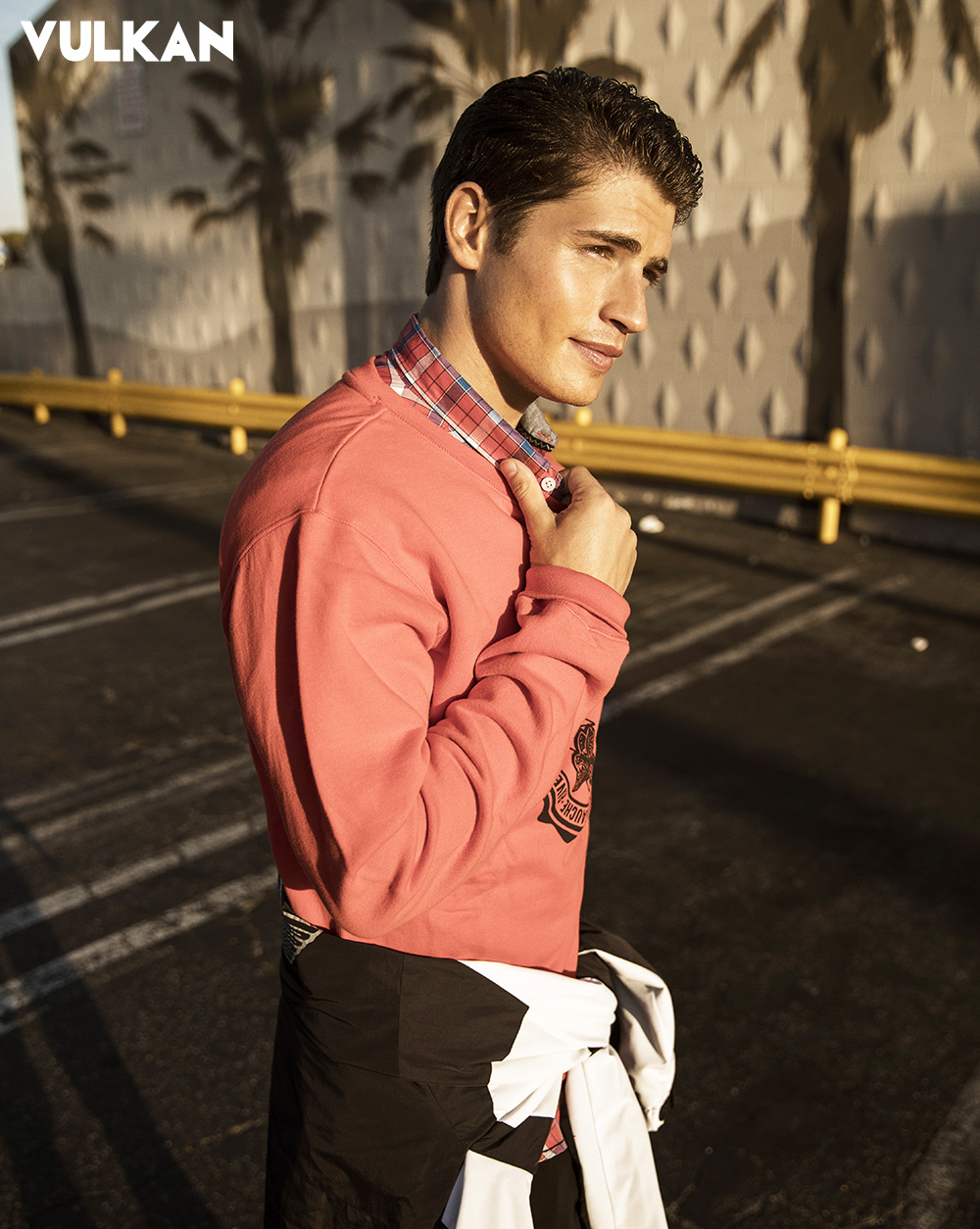 Philosopher Alan Watts was never a fan of the analogy that life is a journey. He felt this concept tends to set us up for a trap, in that the gifts and meaning of life cannot be fully revealed until said journey is completed. He preferred to think of life as music, for music’s beauty is revealed in each and every second along the way. Actor Gregg Sulkin feels exactly the same way, and for his VULKAN feature interview, the star of Marvel’s Runaways opens up about where his life has been, where it is now, and where he is taking his song next.

“I always wanted to be a professional soccer player, so acting was never really my number one choice,” Gregg tells us by phone as he reminisces about the beginnings of his career in acting. “But when I was 13 my mom encouraged me to go to an audition, and up to that point the only thing I had ever done was a school play when I was 9,” he says. “I went to the audition to make her happy and ended up booking the lead role. It was a feature film called Sixty Six that was shot in London, and Helena Bonham Carter played my mom in my movie. Getting an opportunity right out of the gate to play alongside an A-lister made it very hard for me to turn back and not want to continue down that road. My parents have always encouraged me to do whatever made me happy. They always gave me the confidence that whatever path I take in life I could succeed. I’m very lucky in the fact that my support system is very stable and very solid.”

Gregg’s beautiful relationship with his parents and brother has indeed provided him with a rock solid foundation on which he’s built an impressive career. Nine years ago he made the move to Los Angeles when he was all of 17 and he’s never looked back. His talent and chiseled good looks have given him a life in Hollywood that most people can only dream of, but should the roles and experiences ever become mediocre, Gregg would consider it a sign to move on to a new chapter in his life. “I think the most important thing in life is to enjoy doing what you do,” says Gregg. “So the minute I stop enjoying it I would probably stop. I think at this stage in my life (I’m in my mid-20s) my priorities are inline with my work. When I’m 35 and have a family I don’t know how I’m going to feel. My priorities may change, I don’t know.”

When he was a little kid growing up in London, Gregg had always fantasized about what it would be like to be behind the camera. These memories came to the surface during a recent shoot where he found himself filming in a soundstage filled with CGI green screen and state-of-the-art technology. “I think the best part of being an actor is you get to explore so many different emotions,” he tells us. “But there was one moment I was on set shooting a lot of green screen scenes. I remember I was attached to a pull-wire, hanging in mid-air, and I remember thinking to myself, ‘Wow, this is really cool — I’m in my mid-20s and I’m getting to do what I love!” He adds, “I remember being a kid and watching behind-the-scenes videos from my favorite movies and here I was doing it myself. It felt very surreal, but part of me expected it. I always trusted that when the time was right it would happen. But shooting green screen work is exceptionally cool because there’s nothing around you to work with — it’s all up to the imagination.”

Speaking of imagination, one of Gregg’s biggest passions these days is his love of books. “I love poetry and reading books. I grew up thinking that being educated wasn’t cool, but as you get older you realize intelligence is the coolest thing there is. There’s nothing more attractive or inspiring than intelligence.” Gregg currently has three books on the go. “I’m reading a few books right now: The Happiness Project, 13 Things Mentally Strong People Don’t Do, as well as the book Grit which is beside my bedside table. And I have an Ernest Hemingway book I’m dying to start when I finish these three.” But Gregg’s love of books doesn’t stop at the joy of reading — he’s currently writing his own book as well. “On top of that I’m actually writing a book of my own. It’s an autobiography actually. I was thinking to myself how much of a wonderful journey I’ve had so far, and I started putting some stories down on paper. It was then that I realized this could be an incredible book. I feel like the most important thing I can do as a ‘celebrity’ is to inspire people to live the best lives they can possible live. So I’m hoping that writing this book is a way I can do that.”
Gregg’s motivation for writing his memoir goes far beyond wanting to share his life lessons with fans. His ultimate goal is for the book to be a ‘How-To Guide’ for his own children one day. “Writing the book has brought back a lot of emotions as I write about my childhood, the journey I’ve had, and my ups and my downs. It’s been a very therapeutic experience, and I’ve also learned a lot about myself as I write. I would love to give this book to my future children some day. I’d hand it to them and tell them to get to it.”

Imparting wisdom to his own future children will be a piece of cake, considering how enormous an impact his own parents have had on him. “My dad always said to me, ‘Your name goes with you.’ What he meant by that is when we die our character remains behind, so always be kind to people, and always be the kind of person that people will respect. In the book I share a lot of stories of my mistakes, and the experiences I’ve had throughout my life. I would hope my kids would be able to learn from these. Having kids one day is extremely appealing to me. It’s important to me that I have children when I know I’m in a place in my life where I can dedicate as my much time, care, and sacrifice to them as my parents dedicated to me.”

“I fully realize I’ve been blessed in this life,” says Gregg, “which means I have a responsibility to my fans, my parents, and myself. With regards to myself, I know I have a lot to offer and I hold myself to a high standard. What I want to achieve cannot happen without hard work and dedication. My parents gave me and my brother the greatest possible chance to become the best versions of ourselves.” So what would be the #1 pearl of wisdom of advice he’d give to his own kids? “I think if I was to give advice to my kids it would be first and foremost to be selfless. I moved to L.A. when I was a teenager, and it’s very easy to become self-absorbed and self-obsessed, and although you can make a lot money and become very famous, you can still be very unhappy. I understand that giving back is a lot more powerful than just taking. There is a huge correlation between happiness and selflessness.”

But in order to build a family, Gregg must continue his search for a soulmate. And oddly enough, Gregg has not had much success on dating apps. “It’s very funny,” he says. “I did go on a dating app once, and all the girls I connected with were going to report me for pretending to be Gregg Sulkin. So that didn’t work out very well. But thankfully I meet a lot of people through friends and work, and L.A. is actually a small town and a small industry, so I meet people from all stripes. I’ve been very fortunate to have been in relationships with some of the most beautiful souls in the whole world.”

Gregg’s personal philosophy has a lot to do with learning from life experience. “When I broke up with my last girlfriend I actually wrote a list of qualities I wanted in a woman, and thereby that I would want to attract.” And with one effortlessly spoken pearl of Sulkin wisdom, he says something to us that explains why so many people around the world love and admire him so much. “In life you attract what you put out. So how can I attract a queen if I’m not acting like a king?”

We have a feeling when Gregg finally does meet his soulmate, together they will make some of the most beautiful music the world has ever known. Alan Watts would be proud.